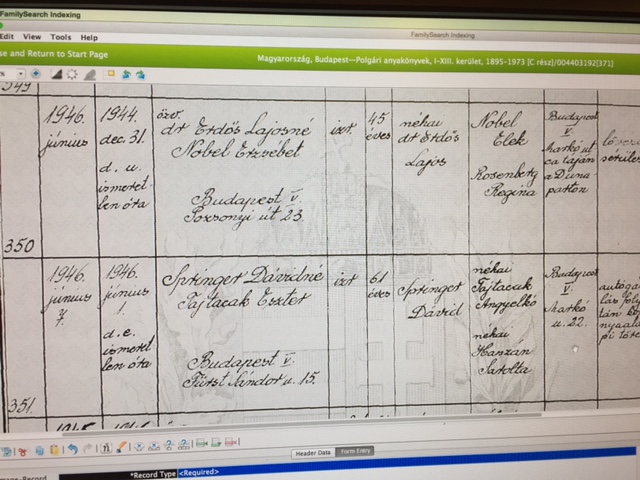 A page from Budapest, Hungary death records, 1946; Elizabeth Nobel was shot by a sharpshooter

I index thousands of records a year and most of them are straight forward births, marriages, deaths, obits, muster rolls and so on (if you don't know what Indexing is, click here).  Life's events play out on digititized pages that I download on my home computer.  It's all fascinating to me, to see naming patterns, occupations practiced in various areas, causes of death, and which ethnicities appear where and when.  It's a habit of mine to read between the lines and place the data into historical context.

Recently I was indexing Budapest, Hungary death records for the years 1945 and 1946.   The world war ended and recovery began during those years.  Well, recovery is hardly the right term for the immediate post-war period.  War-devastated European countries had years of turmoil ahead of them as survivors scrambled for food and shelter amidst the rubble of their former homes, searched for missing loved ones, and began the torturous process of punishing traitors and war criminals.

In the Budapest death records are causes of death that are not the usual tuberculosis, pneumonia, cancer, influenza and so on.  Using a weighty Hungarian dictionary given to me by a friend (a Hungarian-speaking former CIA officer) I have roughly translated these causes: shell wound; poisoning; self-sacrifice annihilation by explosion; bomb; explosion and fire; sharpshooter; Buchenwald (and other death camps); shooting by fusillade; aerial attack; explosion causing falling in (presumably the collapse of roof and walls); and execution.  Execution.  Execution.

For seven weeks beginning in late December 1944, the Siege of Budapest strangled the city.  As the one-million-strong Red Army tightened their grip, deaths from shelling and starvation mounted, eventually reaching nearly 40,000 in that short period.   In the area of Budapest where my indexing projects are taken from, the stretch from January 13-19 was particularly calamitous. 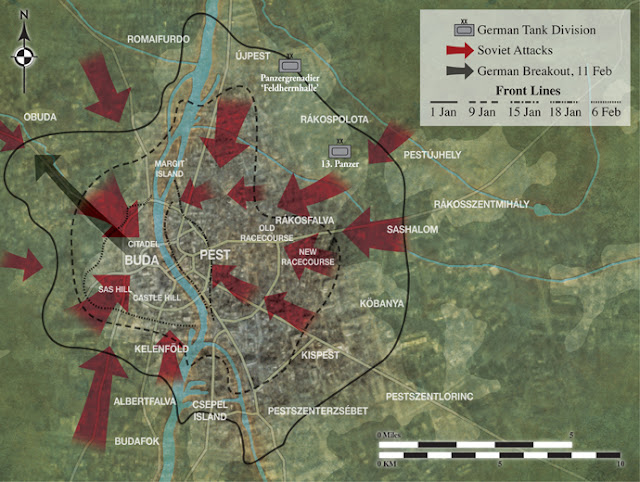 The arrows indicate the Red Army advance into Budapest in January and February 1945
[from www.flamesofwar.com]

The folks in charge of tracking and registering deaths were likely struggling for survival themselves.  Not until 16 months after the Siege of Budapest are the deaths from that time period entered into the register, interspersed among current deaths occurring in May, June and July 1946.  The war deaths are recorded in detail, even down to the time of day in some cases.  Where this specific information came from, I can't even guess.  And how many deaths were not recorded at all because no one knew what happened to the victims?   In wartime people disappear and bodies can remain unidentified.

The pages in these registers show the Halasz family who died together when a shell hit their home on January 13, the Nobels, hit by sharpshooters on December 31, and Anna Perlak, who apparently gave up her life to set off an explosion in mid-January, perhaps at an arsenal belonging to the enemy.  The Reicher family home exploded on January 13, killing three inside.  A curious death is that of Alice Frances Meadows, age 64.  It doesn't give her nationality but she was in English teacher in Budapest.  She was shot down by a fusillade of bullets on January 5.  One wonders why she didn't get out of the war zone when it was still possible.  Surely her Allied connections would have been a ticket out of Dodge if she tried to leave early in the war.

The executions.  Almost all of these were Hungarian men between the age of 21 and 50.  The method or reason is not listed, but the time of death is.  It appeared that about every 15 minutes on some days in June and July 1946, executions were carried out.  Some of the men were married and / or had parents still living.  Did they collaborate with the enemy?   Steal food from their own troops to feed their families?  Perhaps they deserted the Axis lost cause and were apprehended after the war. 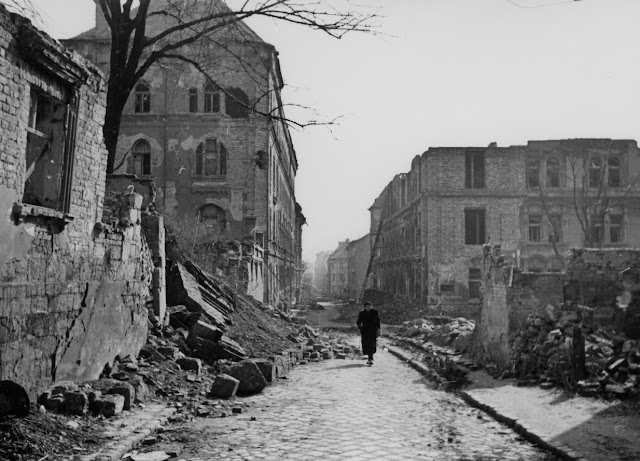 Budapest when the siege was over

Steeping myself in these pages brought home the tragedy of war.  Real individuals suffered tangible tragedy in one of the world's great cities.  Death did not discriminate.  Why this has to repeatedly happen to certain populations (or to anyone) is a question with no answer.