My second annual book roundup divided by subject or genre.  I can't say I have a particular favorite.  You can tell by my description whether I feel a book is worth reading or not.  The colors have no meaning!
911 interest:

102 Minutes--detailed fascinating account of exactly what happened where in the WTC on 911
Global Jihad--a short informative explanation of radical Islam circa 2002; an update would be useful


7 non-fiction accounts of military or war experience:
Highest Duty--Sullenberger's story of "the miracle on the Hudson;" somewhat inspiring but a little slow
Daring Young Men--story of the Berlin Airlift, wow, just read it; is this a great country or what?
A Train to Potevka--Utahn's experience as a secret agent in Russia; worth reading
With the Old Breed--WW2 vet's "tell it like it is" account of Pacific battles; there is no glory in war
The Raft--plane crash-lands in Pacific, amazing chronicle of the crew's survival
Song of Survival--3 Dutch sisters taken captive by Japanese during WW2 in Sumatra
The Zookeeper's Wife--how a family survived and kept others alive at the Warsaw Zoo during WW2

Frank McCourt:
Tis and Teacher Man--if you can cut through the profanity, McCourt has a gift of making the mundane either so comical you crack up or the polar opposite, so sadly pathetic you can barely get through it.

I am glad I read all of these books about power in the natural world:
The Wave--the science behind waves and a study of the increasing rogue waves
Catergory 5--1935 Labor Day hurricane which is even scary just reading about
F5--1974 huge tornado outbreak; shocking what nature can do!
Storm Warning--1999 outbreak of scores of tornadoes largely in Oklahoma

2 related books:
My Abandonment and When She Flew: @ 10 years ago a girl and her father were found living in our local Forest Park, getting along "just fine;"  both these books are about that situation, but are totally fiction, which I did not know until the end of the first book.  I felt cheated because I read them just to find out what happened to the father and daughter.

4 books about true crime cases; none particularly stand out:
The Cases That Haunt Us--6 historic crimes never solved, for which author advances his theories
Sins of the Father--years after the crime a woman's memory reveals a murder she witnessed

The Unabomber--title says it all

The Innocent Man--justice obstructed, then obtained in Oklahoma murder case

The New York Mormon Singles Halloween Dance--hated this book, this author has problems
Come, Tell Me How You Live--Agatha Christie's account of assisting her archaelogist husband on digs in Syria and Turkey

2 non-fiction titles I appreciated this year:
A Short History of Nearly Everything--it really is; the more I read in it, the more the evidence speaks to a higher power in charge of this earth; everything in creation "happened" just right
To America--probably Stephen Ambrose's last; I like that he debunked some popular myths about our country

fiction:
Mockingjay--well-known 3rd book in Suzanne Collins's series
Cry, the Beloved Country--stunning account of the pain, tragedy and hope (yes, hope) in the black situation in S. Africa during apartheid
#1 Ladies Detective Agency--popular fiction; I enjoyed learning about Botswana
The Veteran--6 intriguing short stories with no connecting theme; enjoyable
The Book Thief--opinions are polarized; this is a valuable book that should be read and discussed

From the Mixed Up Files of Mrs. Basil E. Frankweiler--entertaining
Dairy Queen--this one and the two following are a series about the same character, a teenage girl running a dairy farm; I read them quickly because they were the book group choice and they are ok, but not enough substance for me

Front and Center
The Off Season

Superfreakeconomics: more of the same
Posted by Suzanne Bubnash at 4:02 PM 2 comments:

One Less Body Part to Worry About

Good riddance to my gallbladder. I never had anything against it or even gave a moment's thought to its function or existence.

Well, it reared its ugly head a week ago with an intensely punishing several hour episode. I had no idea what caused the terrible pain and made me to lose everything I had eaten that day. The next 3 days were routinely normal.

But on Christmas Eve once again the pain and purging returned with a vengeance. I chalked it up to bad heartburn. When it returned again on Christmas Steven took me to the ER at St. V's. Something was very wrong. After a few hours of tests to rule out heart and other stuff, the nurse said he'd seen my pathology report and I wasn't going home that night. That gave me a few minutes to consider the really unpleasant possibilities--pancreatic or lung cancer, liver trouble, etc.  At first the doc thought it was hepatitis, and it was a great relief when the doc pronounced it gallbladder; that I could handle.

On Sunday the gall stone causing the immediate problem was removed and on Monday the gallbladder surgery was successful; the doc saw lots more stones queued up waiting their turn to cause mayhem in my system.  Laproscopic surgery is a modern miracle.  I have not taken any pain pills since the surgery and the interior tube was removed 24 hours after surgery.

Besides the pain it was hard not eating or drinking anything for nearly 72 hours.  This morning I was allowed to eat Cream of Wheat (blah) and yogurt and tonight a friend brought over some delicious broth.  In 2 days I can eat regular food so my  first stop will be Burgerville for their classic hamburger made from organic grain-fed beef and secret sauce, then a stop at Pasta Pronto for their Washington County Blue Ribbon Salad and fresh Italian bread, and on the way home we'll swing by the Stockpot Broiler for a juicy steak.  Mmmm, I can't wait.

On my dresser I now have an expensive piece of grit that probably cost $30,000 to remove!

A person from Minnesota or the Northeast would laugh at how Oregonians react to snow, especially in the Portland Metro area. At the first flake people make alternate plans for work, schools consider shutting down, Tri-Met chains up its bus fleet, and grocery stores are mobbed with folks stocking up as if for an extended siege. To be fair, it must be said that there are only 2 or 3 snowplows to cover the entire tri-county area which Portland covers. Which means if you live in suburbia you're on your own. Your roads will not be plowed or sanded or rocked. The freeways and overpasses will be, but you'll have to rent a sleigh to get there.

Though snow usually falls over one or two days, then melts within a few days, December 2008 was not like that. On Sunday morning, December 14, the snow began to fall thickly. By church-time the buildup caused the cancellation of all meetings, and the Bishop directed people to hold services in homes with their neighbors from the ward. We joined a memorable sweet service at the Hyde's apartment with about a dozen others that day. 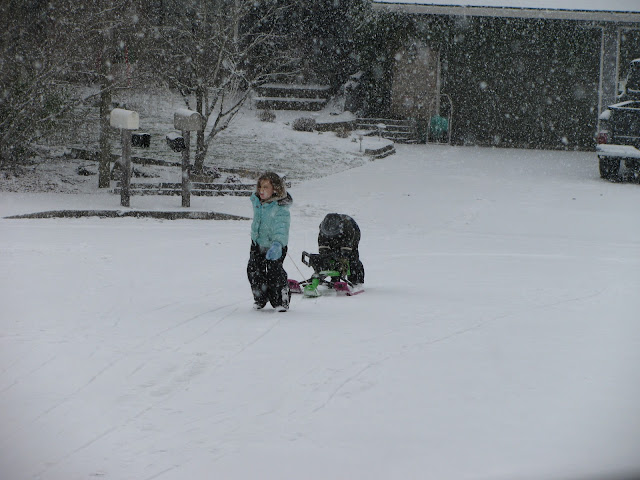 grandkids sledding on our hill

Over the next two weeks, snow fell every day but one which led to the cancellation of an entire week of school, 3 weeks without garbage pickup, and a second Sunday of meetings held with neighbors. On that Sunday I skiied over to the Laney's house while the rest of the family walked. Freezing rain had left a sheet of ice between layers of snow. Every glide tinkled like shattering glass as my skis punched through the ice. 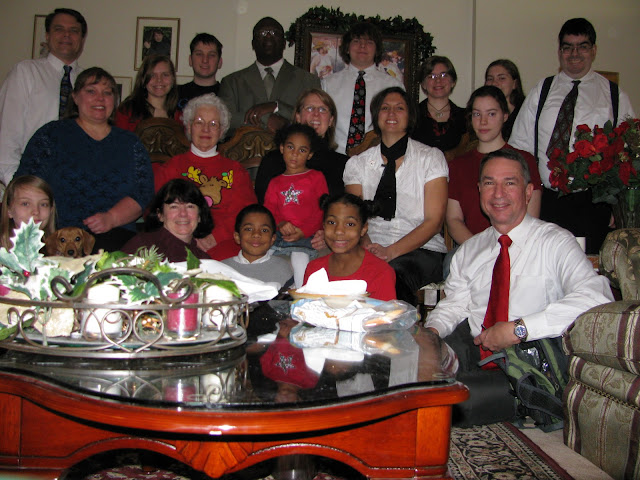 This snow was a wonderful gift. I was able to go out on my x-c skis almost daily (except during freezing rain), and most days, twice. I toured neighborhoods in every direction and skiied around the golf course after dark. Night skiing is magical; it's solitude at its sweetest. I felt immersed in a Christmas carol or part of a Christmas card scene.

These next two photos are a little blurry due to water drops on the lens. When gliding through this narrow path in the drifts I half expected to meet Lucy and Mr. Tumnus by the lamp-post at the other end. 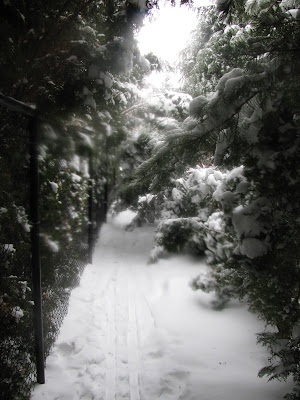 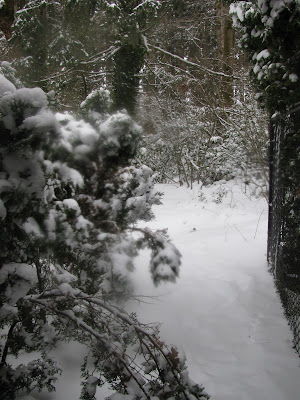 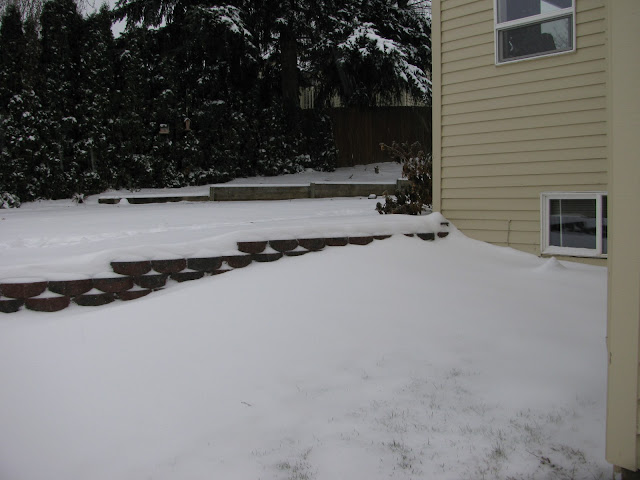 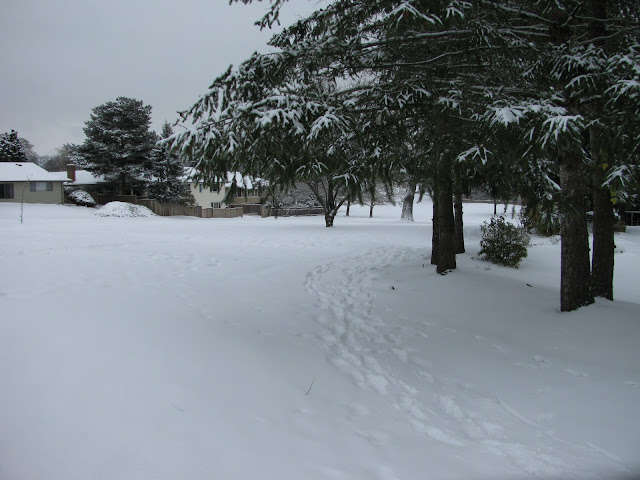 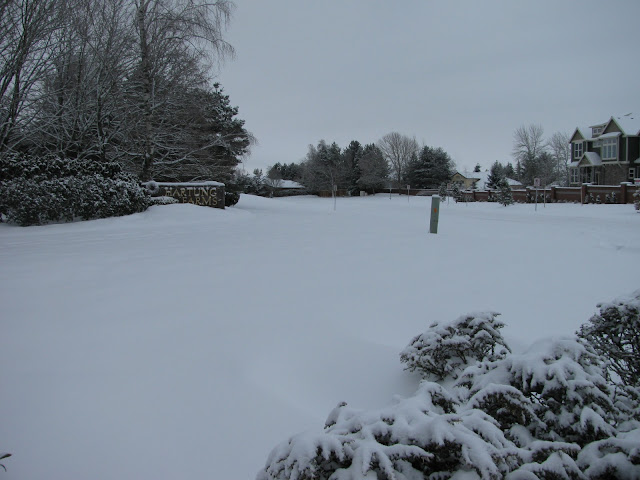 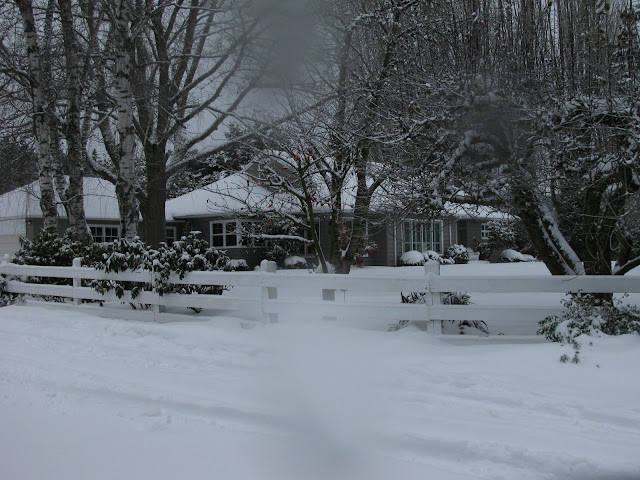 We enjoyed an unusual White Christmas. Some events were postponed because of the snow and the cancellation of school. Our church Christmas program was held on Dec 28. The Westview High School choir concert, always held just before the two-week vacation begins, was held after Christmas. Hundreds of attendees and musicians were all smiles as we sang together, I'm Dreaming of a White Christmas . . .   On January 7th!
Posted by Suzanne Bubnash at 7:00 AM 2 comments:

I wasn't actually done with yesterday's post. It ended abruptly with our move to the house where we have lived for 26 years.

It was a shock at first to come to Portland from little old Meridian Idaho. People here spent money which meant they had boats and trailers and went on vacation to places like Hawaii. During 5+ years in Idaho I never knew anyone to go to Hawaii. There's nothing wrong with that. We were the proverbial country bumpkins that had just rolled in on the turnip truck.


Well, the years have passed quickly. What's so great that we would stay 26 years in the same house?
And many other attractive features of our area! 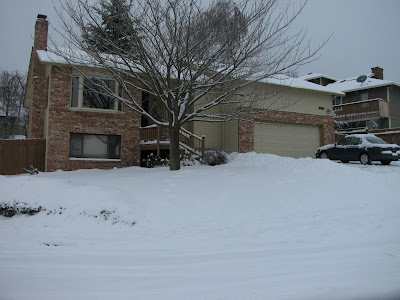