Damascus Syria Through the Eyes of Mark Twain

Damascus, Syria, is my most cherished city, of all the wonderful cities I have visited. In 2005 I spent a month in this desert oasis exploring the fabled old city, riding the servees (sp.), hailing taxis, visiting museums and mosques and Muslim friends, wolfing down fresh-baked flatbread and chilled mint lemonade, strolling the precarious broken sidewalks, and marveling at the treasured antiquities all around.

The Syrians of Damascus and surrounding towns were curious about us, and welcoming. America's war in Iraq was raging, and multiple times we were approached by friendly Syrians who let us know they hated George Bush / our government, but loved Americans, and wanted us to tell our friends to come visit. Some were concerned as to whether we felt safe there, and we did; they emphasized that Syria was a safe country, and it was, then.

I recently re-read Mark Twain's The Innocents Abroad, a chronicle of his travel in Europe and the Middle East, published in 1869. I treasure his description of the ancient-ness of the city. I have included excerpts below giving Twain's impression of Damascus (in blue), along with a few photographs of the city.

There is an honored old tradition that the immense garden in which Damascus stands was the Garden of Eden, and modern writers have gathered up many chapters of evidence tending to show that it really was the Garden of Eden, and that the rivers Pharpar and Abana are the "two rivers" that watered Adam's Paradise. It may be so, but it is not paradise now, and one would be as happy outside of it as he would be likely to be within. It is so crooked and cramped and dirty that one can not realize that he is in the splendid city he saw from the hill-top. The gardens are hidden by high mud-walls, and the paradise is become a very sink of pollution and uncomeliness. Damascus has plenty of clear, pure water in it, though, and this is enough, of itself, to make an Arab think it beautiful and blessed. Water is scarce in blistered Syria. We run railways by our large cities in America; in Syria they curve the roads so as to make them run by the meagre little puddles they call "fountains," and which are not found oftener on a journey than every four hours. But the "rivers" of Pharpar and Abana of Scripture (mere creeks,) run through Damascus, and so every house and every garden have their sparkling fountains and rivulets of water. With her forest of foliage and her abundance of water, Damascus must be a wonder of wonders to the Bedouin from the deserts. Damascus is simply an oasis--that is what it is. For four thousand years its waters have not gone dry or its fertility failed. Now we can understand why the city has existed so long. It could not die. So long as its waters remain to it away out there in the midst of that howling desert, so long will Damascus live to bless the sight of the tired and thirsty wayfarer.


"Though old as history itself, thou art fresh as the breath of spring, blooming as thine own rose-bud, and fragrant as thine own orange flower, O Damascus, pearl of the East!" 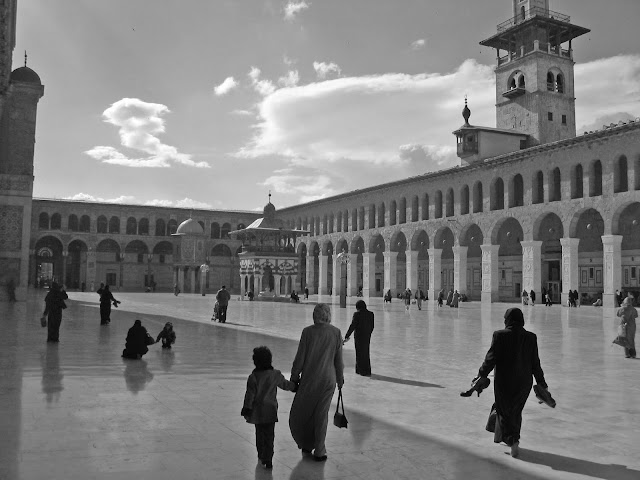 We reached the city gates just at sundown. They do say that one can get into any walled city of Syria, after night, for bucksheesh, except Damascus. But Damascus, with its four thousand years of respectability in the world, has many old fogy notions. There are no street lamps there, and the law compels all who go abroad at night to carry lanterns, just as was the case in old days, when heroes and heroines of the Arabian Nights walked the streets of Damascus, or flew away toward Baghdad on enchanted carpets.

Ah yes, I would not have been surprised to see magic flying carpets in the skies above Damascus.


Posted by Suzanne Bubnash at 1:25 PM No comments: