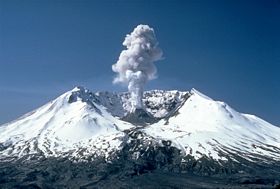 still majestic in a new way

For 30 years now, Pacific Northwest residents have paid special attention to what remains of Mt. St. Helens. Before the May 18, 1980 eruption its conic beauty was likened to Mt. Fuji, but since then it has had a flattish appearance, as if a good portion of the top had been sliced clean-off with a very large butcher knife.

We lived in southwestern Idaho at the time of the eruption, and the ashfall barely skipped us. My friend from Othello, Washington said her family was in church that Sunday morning when word of the surprise 8:32 a.m. eruption arrived, and worshipers went right home. Her photos show a roiling jet-black sky heading straight for them, a catastrophe of alarming proportion. Now farmers revel in their improved soil.

For four years, 2004-2008, the mountain was again in eruption stage. At first it was closed to visitors and climbers, but in 2006 restrictions were lifted during the eruption, and of course we had to get a front-row-seat on that event. Read about that experience right here

Because today is the 30th anniversary of the violent eruption that radically changed the mountain and its surroundings, there have been some major progress reports on the mountain's "recovery." One report included original footage of news reports on that day in 1980. For some days no one could get near enough for a close-up view of the damage, so some of the speculation voiced by reporters now sounds ridiculous: 'we don't know how much damage has been done to the lodge and cabins on Spirit Lake' [answer: they were obliterated and Spirit Lake has basically vanished] and 'perhaps Harry Truman was able to get into his cave and survived' [answer: he was instantly vaporized and buried under hundreds of feet of debris].

For a fascinating report on the mountain's eruption and recovery, click  here

And happy 32nd birthday to Daniel!
Posted by Suzanne Bubnash at 8:04 AM No comments:

I spent a wonderful week in Ithaca, New York with Bridget's family recently. Their apartment complex is full of young families, most of whom are associated in some way with Cornell University. Their building faces the local bird sanctuary so at least once a day Meme and Majd and I walked the network of trails that lace through the area.

The boggy land is pocked with scores of tiny ponds, lots of tall trees, wooden bridges to cross the marshiest areas, and at one end is a very large pond filled with ducks and geese and other water animals. There is a visitor center near the pond.

Some of the more common birds seen in the sanctuary are red-wing blackbirds, goldfinches, jays, robins, chickadees, various ducks and Canada geese, but sometimes scarlet cardinals made an appearance. One day we passed Canada geese parents swimming with their eight goslings! We see great blue herons often here in the Pac NW but not so often sitting on their nests. In the bird sanctuary were two sets of herons  nesting in adjoining tall trees.

Muskrats swim through the pond, raccoons climb the trees, and squirrels and chipmunks are everywhere. The last night of my visit as we walked at dusk, two beaver were splashing near the shore of the pond just yards from us. We crept closer as they came onto the bank to investigate their surroundings. They still hadn't spied us and we got within about 8 feet of them. Then Majd startled them and in a flash they dove back into the pond to head for deeper water. Funny that someone from Beaver-town Oregon would get a better view of beaver in NewYork than I ever do here. 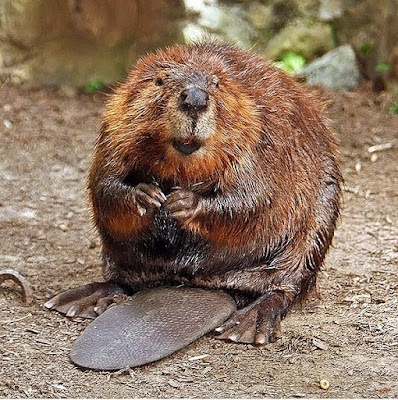 Posted by Suzanne Bubnash at 9:57 PM No comments: