When Teresa got married we gave her a dainty diamond necklace. In the hustle and bustle after the wedding reception the necklace was misplaced. I knew it was in the basement bedroom as that was the only room where wedding clothes were put and that is where all the changing occurred. Yet the necklace remained missing despite several top-to-bottom searches of the room.

Fast forward almost five years. Last week as I was picking up the room in preparation for vacuuming, I stepped on something hard that hurt my foot. La di dah, it was the diamond necklace, lying in the middle of the bedroom floor! Out of the 6 people in the house that morning, not one has any idea how in the heck it suddenly appeared on the bedroom carpet after being MIA for five years. Am grateful to have nearly killed my foot stepping on the almost-invisible piece of jewelry;otherwise it would have been sucked right up the vacuum never to be seen again.


One day my sister, Allie, received a phone call that was a wrong number, yet if you knew my sister you wouldn’t be surprised that she got into a conversation with the stranger and ended up talking for 10 minutes. Before hanging up she introduced herself as Allie, and asked the woman her name, which was Penny. They signed off. An hour later Allie went out to look at some open houses for sale. At one house she got into a friendly conversation with the realtor. At the end of it she asked the realtor her name: Penny. She said, “Penny, I’m Allie.” They both had a laugh over the chance meeting of two strangers, twice in one day.


Teresa once lived in Boise Idaho in a neighborhood north of the airport. She once owned a black 1996 Honda Accord. She now lives in eastern Idaho and the person who bought her Accord has remained friends with her. Recently that friend and her boyfriend stopped by Teresa’s house for a visit, driving the black Accord. Teresa found out the boyfriend lived in Boise and the conversation went something like:

Teresa: What part of Boise do you live in?

Guy: Over near Federal Way.

Teresa: Oh, I used to live in that part of town, near Federal Way. What street do you live on?

Teresa: I used to live near St. Patrick street. Exactly what street do you live on?

Guy: I live on Capistrano street.

Teresa: I lived on Capistrano street for 2 years!  What is your house number?


Weird that the friend drives Teresa’s old car and the boyfriend lives in her old house. . . .
Posted by Suzanne Bubnash at 10:44 PM No comments:

Building Character One Miserable Step at a Time 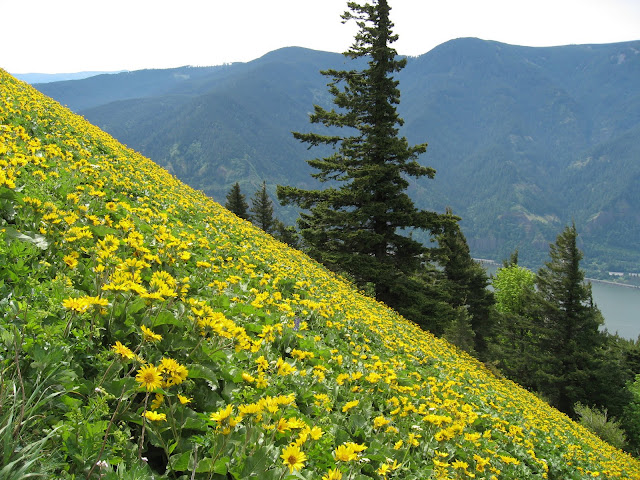 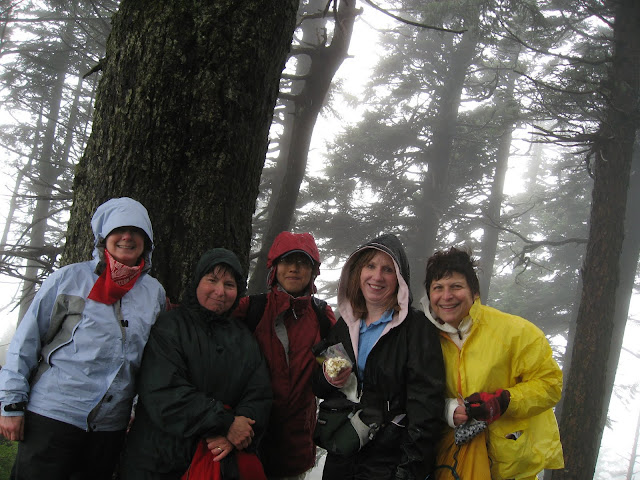 Dog Mountain is famous for its blanket of wildflowers that bloom every May and June. Transformed into a literal Garden of Eden when the balsam root (yellow), Indian paintbrush (red), lupine (purple), phlox (pink), and a dozen other flowers explode on the steep slopes, the color is so intense that an observer across the broad Columbia can see a yellow cast on the mountain.

Located on the Washington side of the Gorge across from Hood River, Dog Mountain is a favorite destination of spring hikers eager to see the display. It’s a tough climb—3000 feet over 3 miles, an average 19% grade. We take the ‘most difficult’ trail up to the top, then loop down the back side which is longer thus a little less steep. From the top a hiker is rewarded with a panoramic view of the Columbia Gorge and the vista of flat-topped Mt. St. Helens to the north.

We delayed our almost-annual climb of Dog Mountain this year because of the endless rain, then scheduled it for June 4, because it couldn’t possibly still be raining by then (wrong). Five of us made the trip. Weather at the trailhead was cool, damp but not watery. All went well until we emerged from the trees, about halfway up the mountain. We were greeted by that stunning spread of wildflowers---accompanied by gale-force winds. The top of the mountain was veiled in thick fog, but we linked hands as we skirted a stretch of trail with a steep drop-off, and pushed forward. It really was blowing strong enough to send someone over the edge.

Higher up we were enveloped by the heavy fog. The wicked wind battered us so hard that droplets of fog peppered my jacket as if it was blowing sand. We felt like we were in one of those Mt. Everest documentaries in which shrouded hulking creatures move upward at a snail’s pace in the face of brutal wind gusts.

At a fork in the trail we paused to wait for two who were behind, and when we were sure they had seen us, we moved on—it was not fun standing there fully exposed to this storm. But they didn’t catch up and I felt sick thinking that in the poor conditions they might have taken the wrong path. The murky fog blocked visibility and the fierce gusts swallowed up all sound. One of us went back for them and eventually we were all together again. At the top we took shelter in a copse of trees that protected us from the wind, but the condensing fog dripped off the trees onto us like steady rain.

Cold and damp (even with waterproof clothing) we scurried down the mountain and how nice it was as the weather grew temperate once again. We passed two trees that had blown down since we passed them on the ascent. Only five other hikers were on Dog Mountain this day. Bagging the hike might have been smarter but I will remember this one better than all the fair-weather treks that blend together. Arduous activities are exhilarating and . . . how would we build character if we did only what was easy and pleasant?!
Posted by Suzanne Bubnash at 11:28 PM 1 comment: 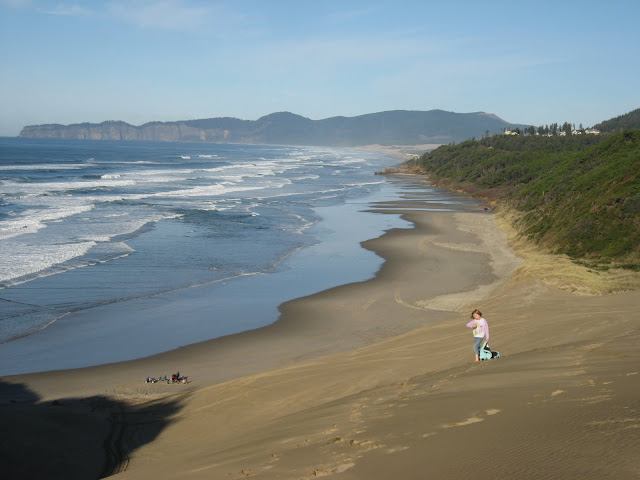 This scenic spot on the Oregon Coast near Tillamook is not well-known. It certainly doesn’t have the draw of Seaside with its attractions for teenagers, or Cannon Beach which is known for restaurants and shopping (ugh). We all have our favorite pleasant beaches and this is mine. Kiwanda's broad soft sand beach mingles beauty and solitude with active tide pools, frolicking whales, squirrely seals and daunting sand dunes, and waves that thunder against the cape at high tide, all set around the remnant of an ancient rich-hued sandstone headland. 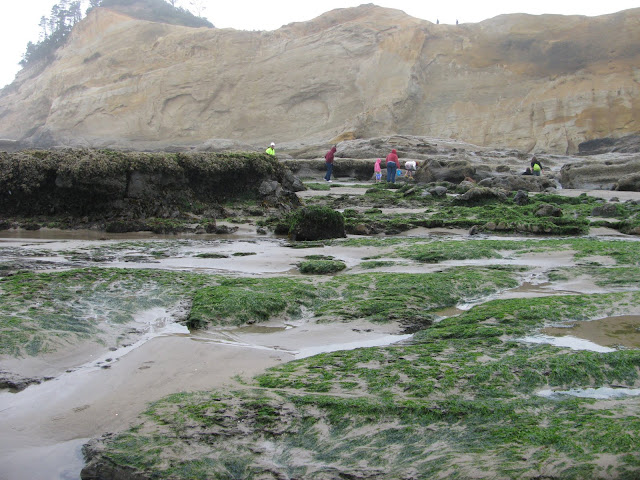 exploring the tidepools below the cape

We spent three days camping at Kiwanda last week. From the camp a short trail leads through a woodsy dune onto the beach. At low tide a walk around a rocky point leads north to the hamlet of Tierra del Mar. Cape Kiwanda itself is a mile south, though it deceptively appears to be short walk away. Along the walk to the cape the steady predictable rhythm of advancing and ebbing waves is serenely soothing. It’s not always peaceful here; enormous land-bound logs lie against the dune, thrown there by fierce winter storms. Occasionally we see hang-glider-ees hauling their load up the dune, then launching, and we watch as they gracefully soar, arc and drift onto the sand below. 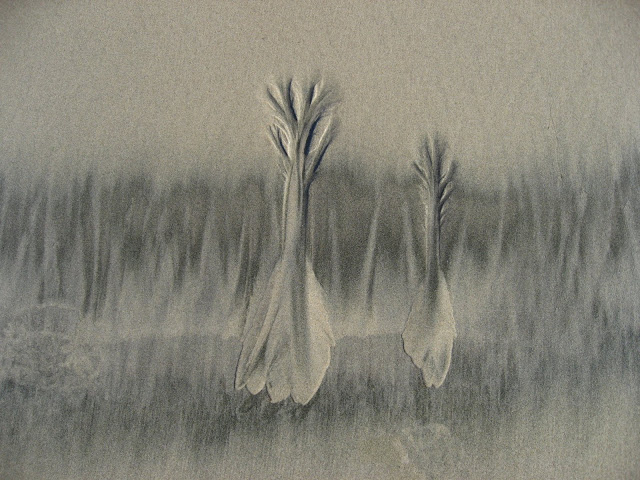 images created in the sand by wave action

Sahara-style dunes give way to the cape itself, parts of which are brushy or grassy. Steep precipices abound and careless people have entered the great cape in the sky from this area. I’ve included photos of the view both north and south from the cape. Pacific City, home to the dory fleet, lies on the south side. Dorys come and go and are fun to watch. Incoming, they skid through the waves at high speed and only cut the engine when they reach shallow water, then glide smoothly to a halt on the beach. Running full-speed down the dunes is a blast, except when we tumble and get a head full of sand. Low tide reveals dozens of different creatures making a living off each other on the rocks and in the pools. Last week a couple of whales were spouting off the cape. 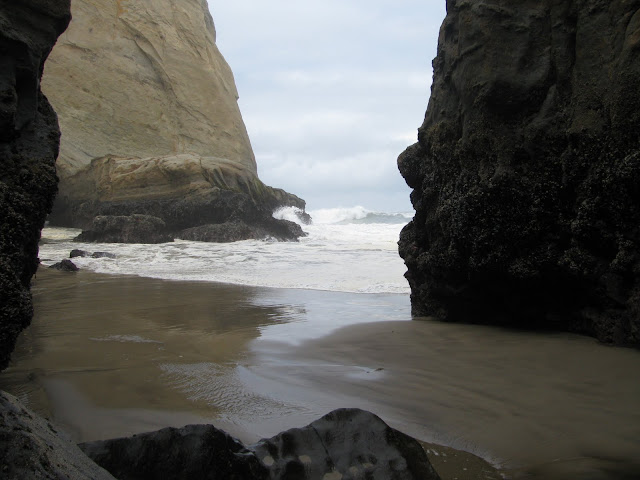 low tide under the arch

We plan to camp here again this summer! 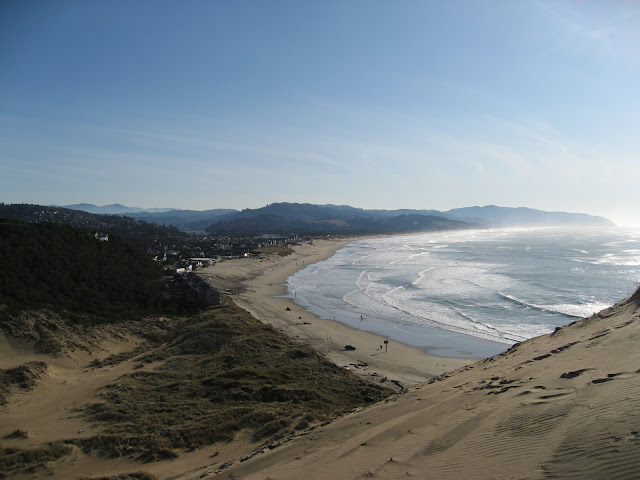 a view of Pacific City from the cape
Posted by Suzanne Bubnash at 2:34 PM No comments:

Three (preventable) Foolish Things That Have Happened to Me

Lessons were learned (by me) following these experiences (which were my own fault due to my poor judgment). They led to some sorry moments. May someone else learn from my mistakes!

Running out of gas on the freeway on a winter night at 10:30 p.m. on my way home from a night class at college. My mistake was not filling up on the way there—in my teenage shortsightedness all I cared about was being on time for my 7 p.m. class. It was dark as pitch on that freeway shoulder as I took off running to the nearest freeway exit to find a phone to call my Dad. Along the way a semi-truck somehow spotted me and pulled over. The driver opened the passenger door and invited me in so he could take me to get gas. I decided to take my chances and continue on the dark spooky freeway. Maybe he was the Happy Face Killer.

Nail in my behind. We were pulling apart the back deck in preparation for remodeling. Blair pulled off each 2x10 and threw it on the grass. I then moved it to a pile in another part of the yard. He got into a routine where he wasn’t looking before he threw, so as I was bending over picking up another 2x10 he threw the next one. It hit my rear end, big fat nail first. On the plus side, I had my first tetanus shot in over 30 years. . . . . .

Late for a funeral. An elderly relative of mine died while I was visiting the family in Slovakia. The funeral was two days later but in the meantime I had to visit Rybniczky relatives in another town about 30 miles away. My time was short there and I knew exactly how many minutes it would take to get to the funeral back in Humenne. It was hard to get away from the Rybniczkys and I drove back to Humenne like Mr. Toad on his wild ride, but was still ten minutes late. Except they held the funeral.  Just for me. I was mortified.

Posted by Suzanne Bubnash at 10:39 AM No comments: