In my first few semesters at BYU the class registration system was positively prehistoric, even by 1973-74 standards. The process was entirely hands-on, so we trudged on down to the Smith Field-house on the west end of lower campus to register on the athletic courts. The procedure went as follows:

Step 1: At home, you (student) studied the current class catalog, picking out classes required for your major, some electives, and then a few options as backups. Each class usually offered a number of sections; popular classes could have dozens of sections available (especially lower division 100s and 200s) but specialized subjects could be restricted to just a few sections. On paper you created a matrix showing how all your chosen class sections fit together time-wise, allowing breaks, and taking care you did not get stuck with any 7 a.m. classes. You took this carefully crafted schedule with you to registration.

Step 2: You trekked to the Field-house but on entering and encountering thousands of other eager students, about-faced and headed for home. No really, that wasn’t a choice. Scores of small tables were set up around the perimeter of the building, each with a sign taped to the front edge announcing which discipline it represented. So if a student wanted History 310 he found the history area, then stood in the line that displayed History 300 classes. If there were a hundred people ahead of you that was tough luck, you twiddled your thumbs for a while.

Step 3: Each table held numerous file boxes holding hundreds of 3x5 cards. Cards were divided up according to the particular course, then within that, the particular section, each card representing one student in that class. If there were 40 spots for one class section, the box held 40 cards for that section, and each time a student requested the class, a card was removed. As you told the monitor what you wanted it seemed that half the time there were no cards left for that section. Right there you had to make a quick decision on whether you could accommodate a different section of the same class, or if you just had to abandon the class altogether. Remember that carefully crafted schedule? It went right out the window. The trouble was, you didn’t know until you went to all the other tables on your list, whether you would get into those class sections, so theoretically you could spend all day going from table to table to construct a decent schedule!

Around my junior year the system changed but I don’t remember exactly how it went, except that  BYU abandoned the Field-house folly and probably switched to a mail-in system, which is still prehistoric in comparison with the sleek online registration of today.
Posted by Suzanne Bubnash at 12:09 PM 1 comment:

Personally I don't care a lot about the car I drive, only that it isn't butt-ugly [think Citron or Studebaker] and doesn't break down on me. And I've been pretty lucky on both those points with a couple of exceptions. Here's the cars that were part of my life before I got married. Will cover the others later.

Chrysler? green. This car [see below] is one of my vague early memories. Perhaps this is the same car Dad called a Plymouth Deluxe which he bought new for $1800 in 1950. Am not sure except that car was green. Looking at this Plymouth Deluxe I saw on the internet, I would say yes, that's the car.  Only not purple and am pretty sure it did not have whitewall tires. 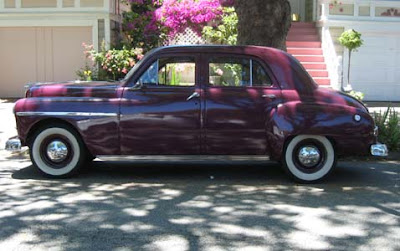 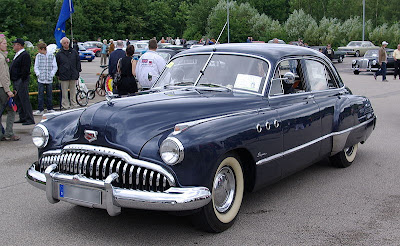 1957 Cadillac, blue. Dad bought it used for $800. It was similar to the above photo but the blue was lighter.


1961 Buick Special station wagon we bought brand new for $2500. It was white with red interior. Dad drove us from California to New York and back again in this car in 1962. No seat-belts!  The kids horsed around in the 'way back' which was cold red metal. I learned to drive in this car in 1970 and later ruined the transmission by putting it in park before it was completely stopped. Picture this in white with all 6 of us squished in it: 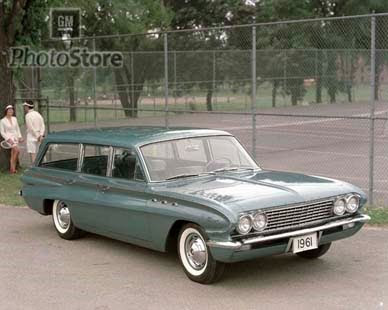 1962 Pontiac Tempest, creamy yellowish; bought from a VP at Lockheed where Dad worked. It was so sluggish which was annoying and possibly unsafe. Dave used to yell to Mom while she was driving, "look out, you're gonna hit that car/ person/ fire hydrant/ curb/ etc.!" [couldn't find good photo]


1964 Chevy Impala, originally gray until we painted it a sicky blue; a sea-worthy land yacht. I got hit in this car about 1971 and it hardly made a dent. To be fair I have to confess that the car was at a standstill at that moment, but was hit by someone going about 40 mph. We bought it from our friend Bob Price. 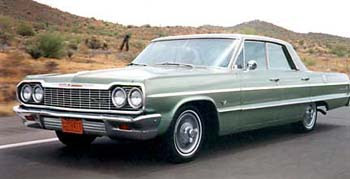 1964 Oldsmobile Ninety-Eight, light blue, bought from our friends the McCollums (Neil and Pat) who always had way nicer cars than we did. The photo below is that car parked at Mt. Pinos with me at the wheel, but don't worry I wasn't driving at age 14. I was recuperating from a nasty toboggan accident that occurred an hour before. 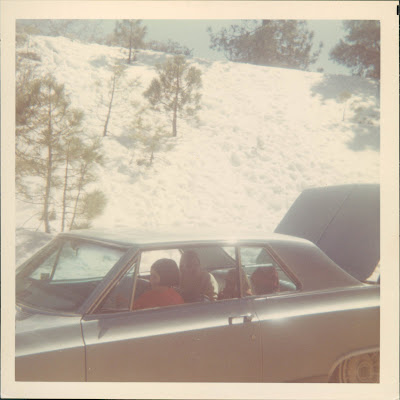 1967 Dodge Dart sedan, dark green. My favorite car because it was the closest to "cool" that we ever owned. It drove well and was responsive. It had a bad habit of getting a stuck choke so I figured out how to remove the lid to the carburetor, stick a pencil in the choke, start the engine, remove pencil, replace lid, close hood, drive away.  It helped to not be in a hurry to go anywhere. Picture this car a deep forest green: 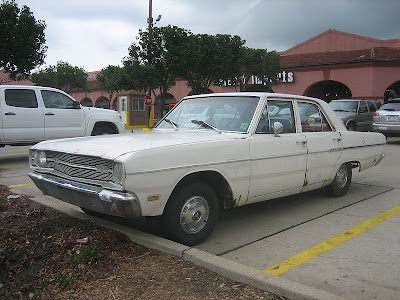 1972 Buick Skylark light creamy tan-yellow. Bought brand new in the San Fernando Valley (from Walter Ruff dealership?) for $3900. Driving home from the dealer it balked going over Newhall Pass and we found it had a crimp in the gas line. We had a devil of a time the next day getting it back up over Newhall Pass so the dealer could repair it. This car was the most "luxurious" we ever owned. 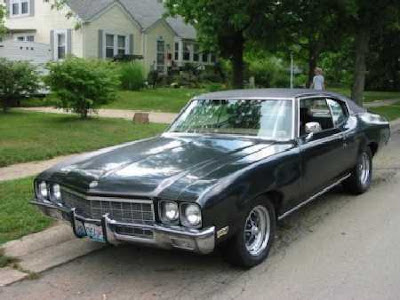 Posted by Suzanne Bubnash at 3:36 PM No comments:

One more post on the local murder case and then I'm done with that topic.

The defendant in the previously mentioned murder case ( here and here and here ) heard the bad news yesterday morning when the jury recommended the death penalty for him. Certainly no one was surprised. The heinous nature of his acts required the worst possible punishment. Only his lawyers know his feelings about the awful prospect of years in prison, then an artificial death. Publicly he has said nothing, even though he was given that opportunity at sentencing.

When he has been escorted in and out of the courtroom the past few weeks his relaxed face has betrayed little  emotion. Yesterday was different. After the sentencing he once again donned the metal restraints, but this time he was quickly, brusquely hustled out of the courtroom by four deputies, rather than the two very casual officers employed in the past. He passed close by me and I read in his dazed face, shock, with a pinch of despair. Perhaps the reality has set in, a reality he chose himself on that November night 3 years ago. 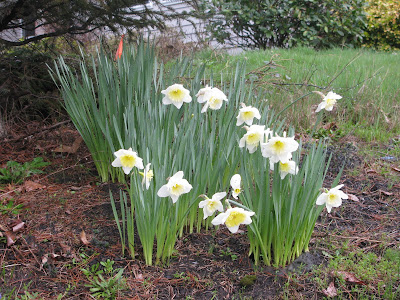 Today I passed by the victims' house. It's a little ratty looking just coming out of the winter months. But there in the front yard a couple of bunches of smiling daffodils were bobbing in the rain and wind. I wondered if Melody had planted them. They seemed to say that hope and happiness and renewal is available for those left behind after that terrible crime.
Posted by Suzanne Bubnash at 5:25 PM No comments: