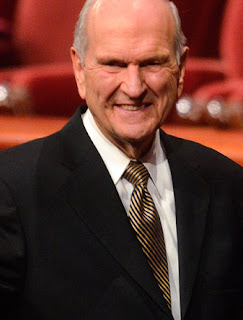 Russell M. Nelson is now the President of The Church of Jesus Christ of Latter-day Saints. The news was announced at a press conference this morning in Salt Lake, headquarters of the Church. President Nelson was a heart surgeon before his commitment to serve the Lord full-time. An optimistic, positive, extremely capable person, he will be a blessing to the Church and the world at large, during the years he is at the helm.

Our dear President Thomas S. Monson passed away two weeks ago. He was my mother-in-law's third cousin, though they never met. Both were descended from a valiant Scottish pioneer family that has a slew of faithful descendants today.

President Monson served for ten years as president of the Church, and had been an Apostle for about 55 years. I just got to thinking that he was the very last of the Apostles who was already in that position when I joined the Church in 1972. All others of the Quorum of the Twelve Apostles have been ordained since I have been a member.

President Nelson chose as his counselors, Dallin H. Oaks and Henry B. Eyring. Oaks, 85 years, has been a lawyer, law professor, judge, author, and university president. Eyring, 84, is an Air Force veteran, author, has a BS in physics, a doctorate in business administration from Harvard, and was an educator at Stanford University.

Besides his life's work as a heart surgeon (he graduated from med school at age 22), President Nelson is a fluent Mandarin speaker, Korean War veteran, and has 57 grandchildren and 116 great-grandchildren! Interesting that during the press conference this morning, he reminded the audience that "Not one of us asked to be here," us meaning those who serve the Church full-time. No one campaigns for these positions. We believe in the Lord's call to the work.

Just as President Monson served with all his heart and strength, so will President Nelson. He said this morning, "I declare my devotion to God our Heavenly Father, and his son Jesus Christ. I pledge to serve them with every remaining breath of my life." This cannot be an easy thing, as he is 93 years old. He has already, and will continue to give his all in service to the Lord and His Church. I have such gratitude to know there is a prophet on the earth today who understands the Lord's will, and can lead in accordance with divine revelation. 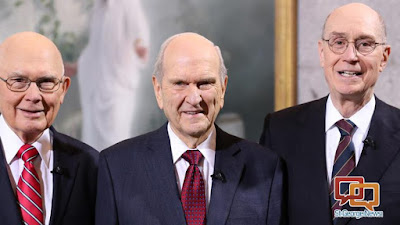