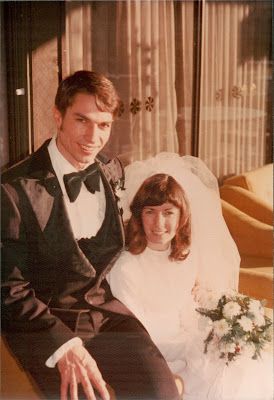 December 19 was our 35th wedding anniversary! Wow, that sounds like a lot of years. I remember when my parents celebrated their 25th and how old they seemed to me at the time. They made it to their 40th before my Mom died and here we are, only a few years away from that. We celebrated by going for an early dinner at the Reedville Cafe. It's a local place, one-of-a-kind that serves delicious meals far superior to the factory-food-popular chains that proliferate our area. We splurged by ordering an appetizer of their delicious homemade onion rings. I don't remember ever ordering an appetizer before at a restaurant. It's not worth the expense and most restaurant meals are enough food for me anyhow. But it was our anniversary . . .

December 19th seems like an odd day to get married. It is close enough to Christmas that most people would avoid it. We had a challenge scheduling our marriage. Because we are Mormons who were being married in the temple, we didn't have the choice of a totally open calendar. Temples were not open over Christmas and New Year break except for one day between the two holidays.

We were BYU students living in Provo and that week before Christmas was finals week, which ended Friday December 20, so getting married before that was not convenient. The last day that temples were open was Saturday the 21st. We wanted to have our reception in Southern California that day, but the drive from Provo was going to be close to 12 hours so we couldn't get married and get to our reception all on the same day. We didn't want to use that one day in between the holidays because we wanted to have our quasi-honeymoon over before Christmas so we could head back to Provo on the 26th.

We decided to get married at 7 PM on the 19th in the Provo Temple, then drive to California on the 20th, have the reception the 21st, go on a two-to-three-day honeymoon, come back Christmas Eve, leave for Provo the 26th. It worked out OK because I moved my final exams to be done on the 18th. Craig had two finals on the 19th. He took the first one, then when he showed up to the second one the teacher excused him because he had earned an A no matter how he did on the final. So he went home and took a nap.

Now that we passed that milestone, we have five years till the next significant one. My dream celebration would be to camp at Cape Kiwanda for a week, if I will still be able to get into a sleeping bag on a pad on the ground in a tent under the stars in my old age!
Posted by Suzanne Bubnash at 11:47 PM