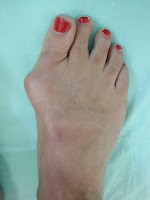 My Mom had her first bunion surgery when I was in about the 6th grade (1966). She had been in misery foot-wise for decades. I remember her struggle with those old-fashioned wooden crutches and the hideousness of her feet with their new set of personal railroad tracks. My strongest memory though is the way she guarded her feet like they were Fort Knox. Whether she was walking or sitting we kids could only get so close before she shooed us away. Apparently the pain was so extreme that she couldn't tolerate the thought of her feet being stepped on by her little darlins, even after a few months had passed.

So, I swore I'd never do bunion surgery, never go under the knife for the sake of painful bunions. Over the years mine enlarged and I discovered new ways to lesson the misery of being on my feet. Sensible nannie shoes, when I could find them, were a lifesaver. Until that didn't work anymore. When my bunions progressed I started stretching the nannie shoes to fit, and then when they got bigger I put layers of cushioned bandaids and moleskin and even foam padding over the bunions.  When that was no longer enough, I looked into the very surgery I once resolved never to have.

And here I am 8 weeks post-radical bunion surgery. It's been a slow, sometimes tough recovery, marked by milestones of relief. After two weeks the pain went from all-consuming to very manageable. On Christmas Eve, the most special gift was taking my first shower in five weeks. Sitting in a camp chair while the hot water ran over me was heavenly.

At the almost seven-week point I hit bottom. My foot was swelling badly from edema so walking without crutches was not even on the radar. Finally the doc recommended physical therapy and I broke down in the PT's office. Then I came home and promptly tumbled down the stairs. Thinking I had broken my healing foot, I laid at the bottom wailing in my own personal pity party.

Diligently employing physical therapy has been the greatest thing though. To know I have the power to help my foot helps me see the end of the road. The PT gave me a pressure sock that fits tightly on my foot and it feels wonderful while holding down the swelling. I have labored diligently in PT even though some of the exercises give me the willies (like massaging the scar tissue--hard). On Thursday I experienced the most wonderful thing--she showed me how to make my right foot take walking steps again. And now I can put weight on that foot and even stand without crutches for a while. My foot looks more normal instead of like an inflated balloon, and on Thursday I was able to put a shoe on it for the first time in two months.

But you know the biggest plus of all?  That ugly knobby painful bunion is gone forever!
Posted by Suzanne Bubnash at 7:55 AM