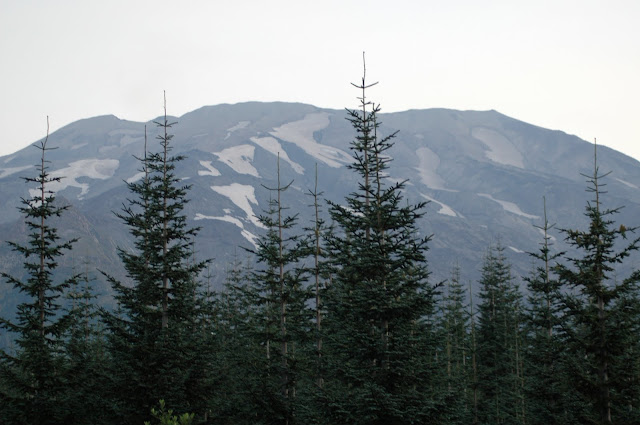 About 1996 I accompanied Bridget’s X-C team on a field trip to climb Mt. St. Helens. You would think in mid-August the weather for such a feat would be ideal, but as we gained elevation cold and low clouds settled in, the wind whipped around us, and the circumstances were so unpleasant that the group eventually gave up.

A few years later our family and some friends made the attempt. The mountain had lost about 2000 feet in the 1980 eruption, and is now @ 8400’ high. We overnighted at Climber’s Bivouac at the 4200 foot level and enjoyed a roaring campfire. At 7 a.m. we set out through the forest and ascended steadily upward for a couple of miles until the trees parted and the blast zone unfolded before us. By this time 10 of the party had pulled way ahead leaving Carolyn and I to bring up the rear--we were ok with climbing at our own snail's pace.

From there the trail crosses an open ashy plain, and then the arduous, taxing part of the climb begins. For about three hours we navigated the rock field, pulling and heaving ourselves up over boulders, some the size of small cars, getting scraped and bruised and depleted in the process. 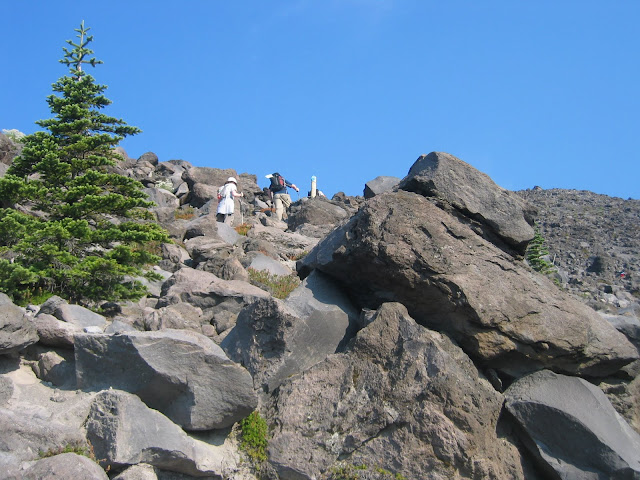 After that exhausting ordeal came a steep, steep haul up the ash cone to the summit. The loose ash and pumice made us slide back most of every step forward; as a result we might have climbed that part three or four times over. Partway up I sat down thinking there was no way I could endure the last 500 feet. My blood sugar had plummeted leaving me with zero energy. Blair skipped down from the summit to carry my gear and give me some zappers for last-minute pep. 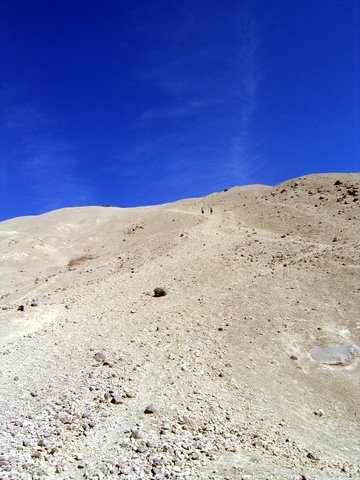 After 5 ½ hours I joined the group at the summit and oh my, how worth every excruciating step it was. Peeking over the lip of the crater we viewed the lava dome 2000 feet below, and all around was a bird’s-eye vista of the eruption’s mighty power. Within our view were the other Cascade volcanoes--Rainer,  Adams,  Hood,  Jefferson, Washington, and the Three Sisters near Bend.  Exhilaration is the only word . . .

In 2006 we did it again. Only this time the mountain was in active eruption! The view from the top into the crater included a rare vista of brand new rock being created. It tumbled right out of the throat of the steaming lava dome to plunge hundreds of feet down to a pile at the base. What a mesmerizing view—it was impossible to look away.

This second time the climb took me only five hours to reach the summit. I strongly recommend this non-technical climb for anyone fit enough to do it. And if I’m able to summit, you could certainly do it too. 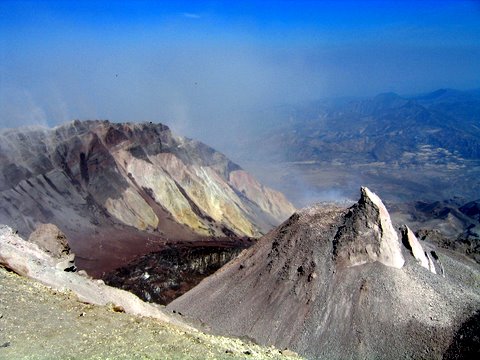