If You Are What You Ate in Childhood, Then I'm in Big Trouble 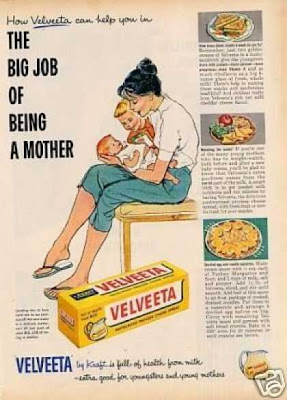 A distinct vision of my pre-school years sees me sitting at the kitchen table eating lunch with my Mom.    The colors of my lunch were yellow and white.  Can you guess what it was?    A banana with milk, or lemon yogurt with a slice of bread?    Sadly it was not anything that nutritious.  My daily lunch staple was a butter sandwich.  And golly it was delicious.  Mom sliced square slabs off the butter stick and arranged them on airy Weber's white bread, fresh from its blue and white checked wrapper.  The butter slabs were thick and cold and melted in my mouth.

It isn't that Mom didn't feed us well.   Junk food was limited and we ate plenty of fruits and some vegetables.  There was just so much that people didn't realize about food.  We sometimes ate twinkies and snowballs.  My kids never have.  We ate bologna sandwiches.  My kids never have.   When Mom or Dad was in a "gourmet" mood, they made us fried bologna sandwiches, one of the tastiest really bad foods ever.   We kids were mesmerized by the sight of the flat pink bologna frying in butter in the cast-iron skillet.   As it cooked the meat puffed up in the middle like a Mexican sombrero.  My sister Alice confessed that she recently made herself a fried bologna sandwich.  Wish she had invited me to join her! 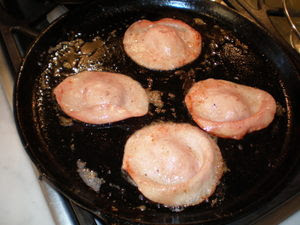 Weber's white bread was served at our table every night and so was meat--we ate way too much beef.  Except we Catholics ate fish on Friday (usually frozen fillet of sole).  My Dad ate kielbasa supplemented with icky stuff like pickled pig's feet and other weird Hunkie food that I wouldn't touch.  Most vegetables served at dinner came out of the freezer section of Hughes market, or were courtesy of Del Monte cans.  Velveeta was the only "cheese" I knew.

On the humorous side, there is a portion of a butchered pig called the butt that is always served smoked.  It's very juicy, meaning it oozes fat.   On those twice a year days when our folks announced that dinner was smoked butt, we kids fell into paroxysms of wet-our-pants laughter.   My smart aleck brother once retorted, "no way you're gonna smoke my butt."

You can probably guess what we ate for breakfast.  We made extra sure to exclude any cereal with a shred of protein or fiber.  Top of my list were rice krispies and cocoa krispies.  Zero food value except for the milk.   I shudder thinking of all the worthless food I ate.   That includes (true confession alert!!) my favorite snack: dog biscuits.  Yup.   I would wait till Mom was busy, sneak into the small walk-in pantry and shut the door, then eat doggie treats right out of the box to my stomach's content.  It was a spanking offense and worth every bite.

As I said, if we are what we eat, or what we ate in childhood, I am in big trouble.  I have  hope that the last 4 decades of nutritious eating have reversed the ill effects of my childhood diet.


Posted by Suzanne Bubnash at 7:00 AM