Last May we began a summer-long project transforming our backyard from a dark mossy jungle to a light, open, more usable space. Part 1 was to remove some too-large shade trees. The largest of those trees, "the lone fir," was not even in our yard. In 1984 an adjacent home owner planted a cute, dainty two-foot-tall Douglas Fir in the corner of his yard, six inches from our property line.  We mentioned the folly of that to him (the probability of a someday 150-tall fir falling on someone's house) and he promised that at he would cut it down to use for a Christmas tree. Never happened. Craig and I discussed sneaking over in the dark to slice it off, but we didn't want to break our record of never seeing the inside of the county jail. 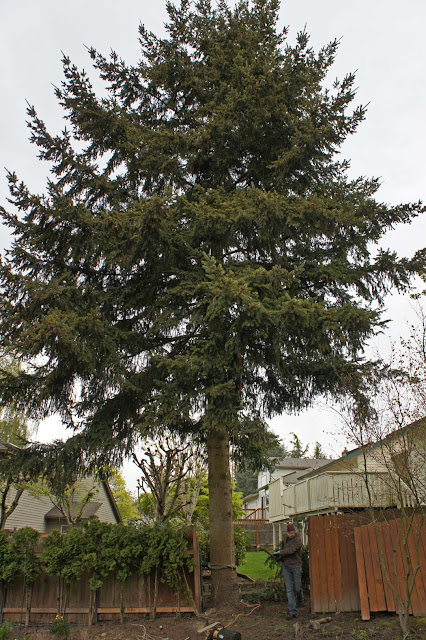 the lone fir
Fast forward to a new homeowner and a much taller, heftier tree--the fir grew at least two feet per year. We regularly asked B and G to take it down. They didn't want to give up the privacy and shade it provided.  During every windstorm I lost sleep waiting for the crash.

In early May I approached B and G again, this time with a professional arborist in tow to explain the wisdom of removing the lone fir. They finally agreed. Could it be that my offer of paying 50% of the cost convinced them it was time to act?

In the end, another adjacent neighbor chipped in so the cost was split three ways (total was $500), as were the fir rounds. 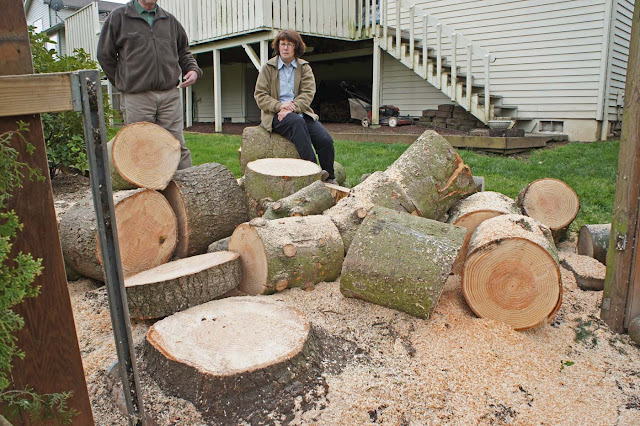 A winter's supply of firewood

All summer we enjoyed a clear sunny backyard. No more picking up a million fir-cones a year, or hacking enormous branches off the fir (at the peril of grave injury), or sinking into the soggy morass at the south end of my sunless yard. The bonus benefit is the flowering plants that languished for decades under the shade of the lone fir suddenly came to life!  Some quadrupled in size and they all bloomed like they never had before. A couple of plants popped up that I thought had died years ago.  Check off step 1 on our way to a beautiful backyard.