A favorite childhood memory of mine was listening to the faint sound of a distant train whistle winging through the night and in through my bedroom window, landing on me, who was usually lying sleepless in my bed. The Southern Pacific lines ran in every direction through our San Fernando Valley. One line traveled northwest through San Fernando, over near the old Sunkist orange juice plant.  Another snaked west and north through Van Nuys on its way to Central Valley. And the Coast Line ran a few miles south of our house through the mountains, toward the Pacific Ocean. The whistle, borne to me in the quiet of the evening, piqued my curiosity about what was at the other end of those rails. 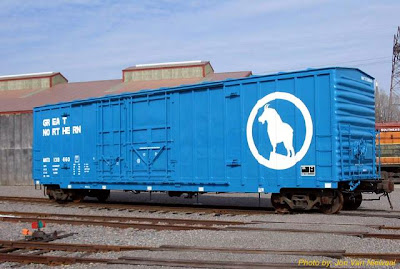 Along with listening in the dark for a lonesome whistle was the thrill of being stopped at a railroad crossing. Boxcars from all over the country whizzed past the windshield of our car, our front row seat on the world. Each picturesque boxcar seemed to be throwing out a story of its travels, and of what it had seen. Santa Fe, Southern Pacific, Cotton Belt, Pittsburgh and Lake Erie, Baltimore and Ohio, Soo, Norfolk and Western, Wabash, Canadian Pacific, Denver and Rio Grand, and a score of others were as magic carpets, leading me to imaginary places my little brain couldn't even fathom. 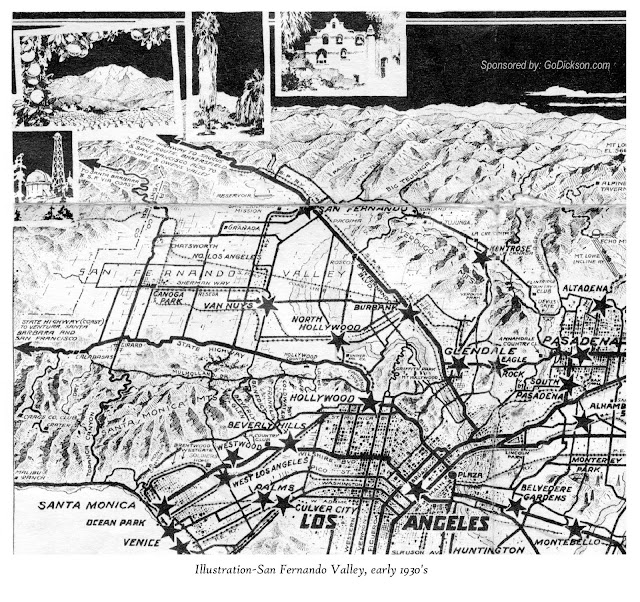 My number one favorite boxcar to watch for was Great Northern Railway. That mountain goat perched on a cliff just looks cool, that's all. Not  until decades later did I discover that my great-grandfather's brothers all worked for Great Northern. And, three generations of my Mom's ancestors had worked for the Boston and Maine Railroad in the 1800s. Railroading runs in the blood. 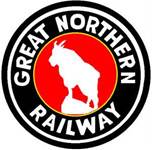 My normal childhood activities incorporated railroading. We jumped rope to "Engine engine number 9, rolling down the Chicago line. If the train jumps off the track, do you want your money back?!"  My favorite song in my Dad's repertoire was "I've Been Working on the Railroad." We lined up empty cardboard boxes to form a choo-choo train through the living room. TV westerns were full of stirring railroad scenes. Old railroad stations fascinated me and still do. Visiting Union Station in Portland sends me back to a simpler time. Harry Bailey (Jimmy Stewart) once said the most thrilling words ever are "anchor chains, plane motors and train whistles." Yessiree.

In 1976 Craig and I traveled through the British Isles via rail. In 1981 I took my first ride on an American passenger train, a night ride from Boise to Salt Lake. What a thrill to be ON the train that was blowing the whistle, and passing through scenery where cars couldn't follow. About 5:30 a.m. the conductor softly woke up the passengers to alert each one that the train was passing through Logan Canyon, and we might want to take a look. We looked. Out one window of the train was the flank of a mountain and on the other was . . . nothing.  Just air, as we peered down into the canyon far below.

We have a half dozen of these not far from our house: 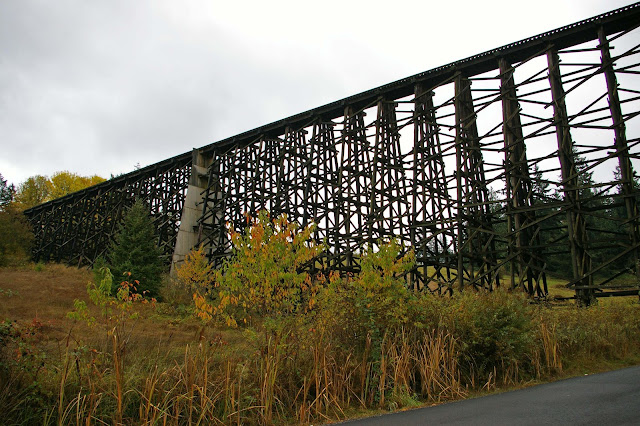 I've hiked over a few of these old trestles. Can't help it--I must see what's on the other end. A few of them are still occasionally used by logging trains. One day Steven and I hiked through the mile-long tunnel that runs between Helvetia and Burlington. My sister and I once had to claw our way up a hill to escape from a train that burst out of the mile-long San Fernando tunnel. And in high school my friends and I leaped off the railroad bern behind Bonelli's house when a train suddenly rushed around the bend.

Well, the heydey of railroading is long gone, but I have my treasured memories. Arlo Guthrie sings in his ballad The City of New Orleans, about a doomed railroad system:

And all the towns and people seem
To fade into a bad dream
And the steel rail still ain't heard the news.
The conductor sings his song again,
Passengers will please refrain:
This train's got the disappearin' railroad blues.

This train fan's got the disappearin' railroad blues.


Bonus: View this cute little train-related safety clip is posted on YouTube.
Posted by Suzanne Bubnash at 9:36 AM