Voting Methods Then and Now

Depending on where you live, the above photo may or may not be familiar to you. These polling booths are exactly like the ones my folks used to take me to when I was a child. Yes, they took me as part of their civic duty to emphasize the importance of voting. And I never lost sight of that.

I did the same for my children until one day, when Oregonians voted to vote by mail. That was a disappointment to me for several reasons.

First, a community gathering at the local school or firehouse has deep value. You mingle with your neighbors, you witness people doing what in some other countries either doesn't happen, or happens at the peril of one's life. It is a public way to demonstrate your patriotism and your concern for civic affairs. 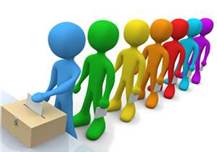 Second, as I mentioned above, voting in a way that takes a degree of effort sends a message to the younger generation.

So when we went to by-mail voting I realized we had to create a way to make an impression on our children (and now grandchildren). It has worked best to sit down a night or two before election day with the family and spread out our ballots with the voters' pamphlet open and Oregonian summaries available. Sometimes I let one of our kids pencil in the bubbles for me (so arrest me).

Then it's time to deliver them to the ballot box (you can mail them in if you vote early enough). Our local library is the closest place with a drop. And doing it on election day requires patience and careful driving. The scene is not unlike what happens when the latest gadget is released and people clamor to be one of the lucky to buy it first. There's no place to park and people are frantic to get inside before 8:00 p.m. Our library got smart and now on election day volunteers meet your car to take your ballots and drop them in the box.

We delivered our ballots last night with our grandchildren slipping them into the slot in the ballot box. We want them to remember "participating" in voting.

Reminiscing a bit, the first presidential election I remember was Kennedy vs. Nixon in 1960. I was barely six and in first grade. The kids on the school bus  would chant loudly, "Kennedy Kennedy is our man, Nixon goes in the garbage can!!" And then vice versa for the other side. Mom was Republican and Dad a Democrat. I used to eavesdrop on their political discussions.

My first voting election was in 1972, barely at age 18. The voting age  had just been lowered from 21. I honestly can't remember who I voted for that year.

NOTE: Oregon's percentage of people who vote in elections is hardly higher than it was when we had to hoof it to the polling place. Why would that be?