There's Nothing Like [the View of] the Cheap Seats

No, I did not misquote Alabama in the title of this post.  Love their song though, especially the line, "there's nothing like the view from the cheap seats!"   Reminds me of some of the Dodger baseball games I attended a very long time ago.

This post concerns not the view FROM the cheap seats, but the view OF the cheap seats.  Cheap in this case means free.  And though they were singing about baseball, this is about football.   And we had to work for these free seats by doing card stunts.

Back in the day BYU passes for the card stunt section at football games were free, the original cheap seats.  And they were on the 50-yard-line.  Yeah we sat on hard wooden benches but the vantage point was as good as it gets.

To get the passes we had to show up to the Wilk Ballroom at 7 a.m. on a given Saturday to sign up.   The passes were good for for the entire football season.  We were given basic instruction on how the card-stunts work.   In a typical game we might do 5 or 6 stunts by following directions written on big poster paper and held up for us to see.  The poster had a picture of what we were creating with our cards.  Our stack of 5 or 6 colored cards stayed under our benches until needed.  Of course, we could never see the stunts ourselves.  I trust they were colorful and dynamic when viewed from the paying seats across the field.  Most of them were words or short phrases pertaining to football, but I remember one that was a marriage proposal orchestrated by a guy who sat with his girlfriend on the opposing side of the field.  We didn't know until after the game that we had just asked an unsuspecting gal if she would marry the guy sitting next to her.

I couldn't find a photo of a BYU stunt, but here's one from UCLA: 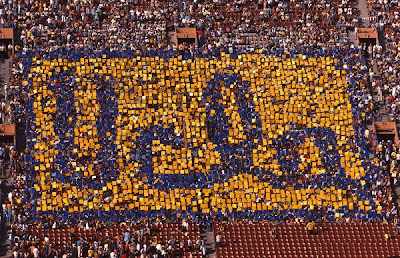 I'm pretty sure we never did anything close to this intricate American flag stunt: 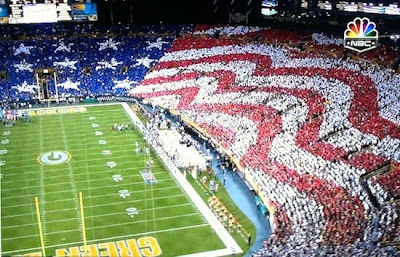 Here's the link to that nostalgic song,
The Cheap Seats
Posted by Suzanne Bubnash at 4:30 AM