Portland Oregon is a busy river city spanned by many bridges.  They cross the Willamette River through downtown and a little beyond.   Some are stunningly beautiful, others not so much.  A few carry interstate freeways.  The rest are local, and the newest one carries NO CARS!

Spanning the Willamette, beginning at the north end:


The Gothic-style St. John's Bridge is the loveliest of them all.   Opened in 1931, it links the community of St. John's with the West Hills.   I love the east bridge approach that winds through the neighborhoods; you earn the right to drive across this bridge. 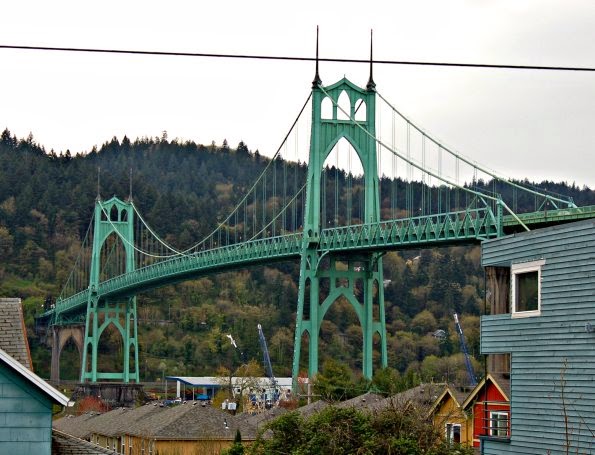 The Fremont Bridge, opened in 1973; it carries Interstate 405.  This one is the grandest and most fun to drive on.  It's huge, it's majestic, and you feel like you're in space, looking down at the city.  Locally  it is known as the "flag bridge." 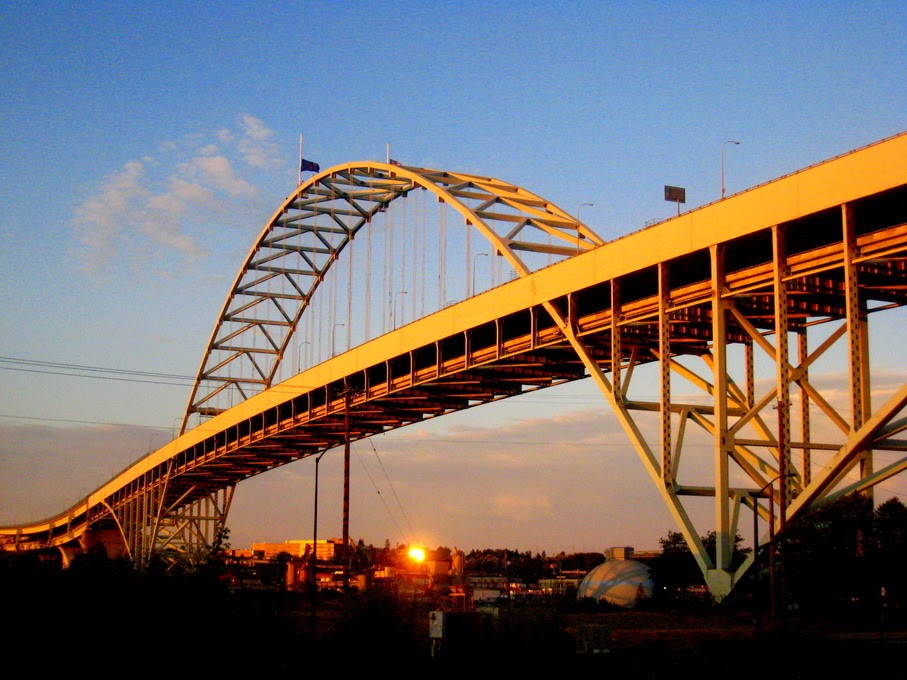 The Broadway Bridge, painted "Golden Gate red."   It was built in 1913, and opens vertically for tall river traffic. 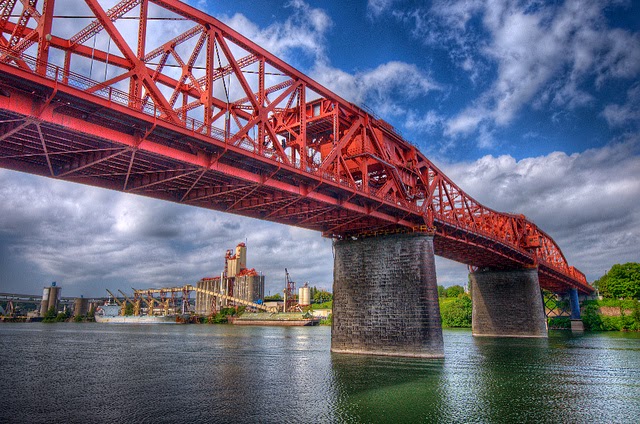 The Steel Bridge carries bicycles, peds and railroad on the lower level, and cars and light-rail (MAX) on the upper.  A lift bridge, it opened 1912. 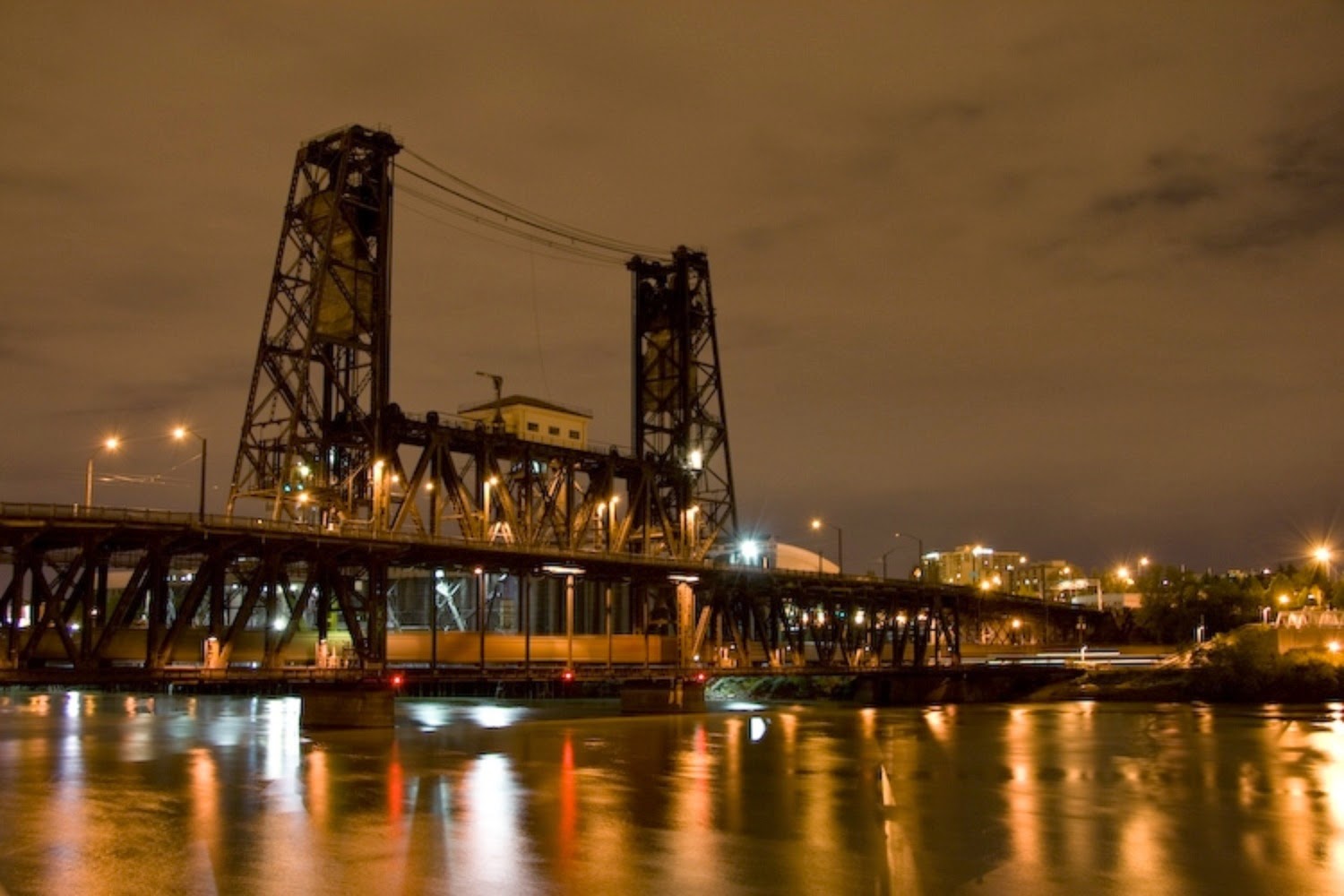 The Burnside Bridge is the most well-known and used in downtown and has been operating since 1926. Sometimes Burnside Street is used in a derogatory manner given the number of homeless and drunks who congregate in the area.  But for decades Saturday Market was held under the west end of the bridge, and that was a lot of fun. 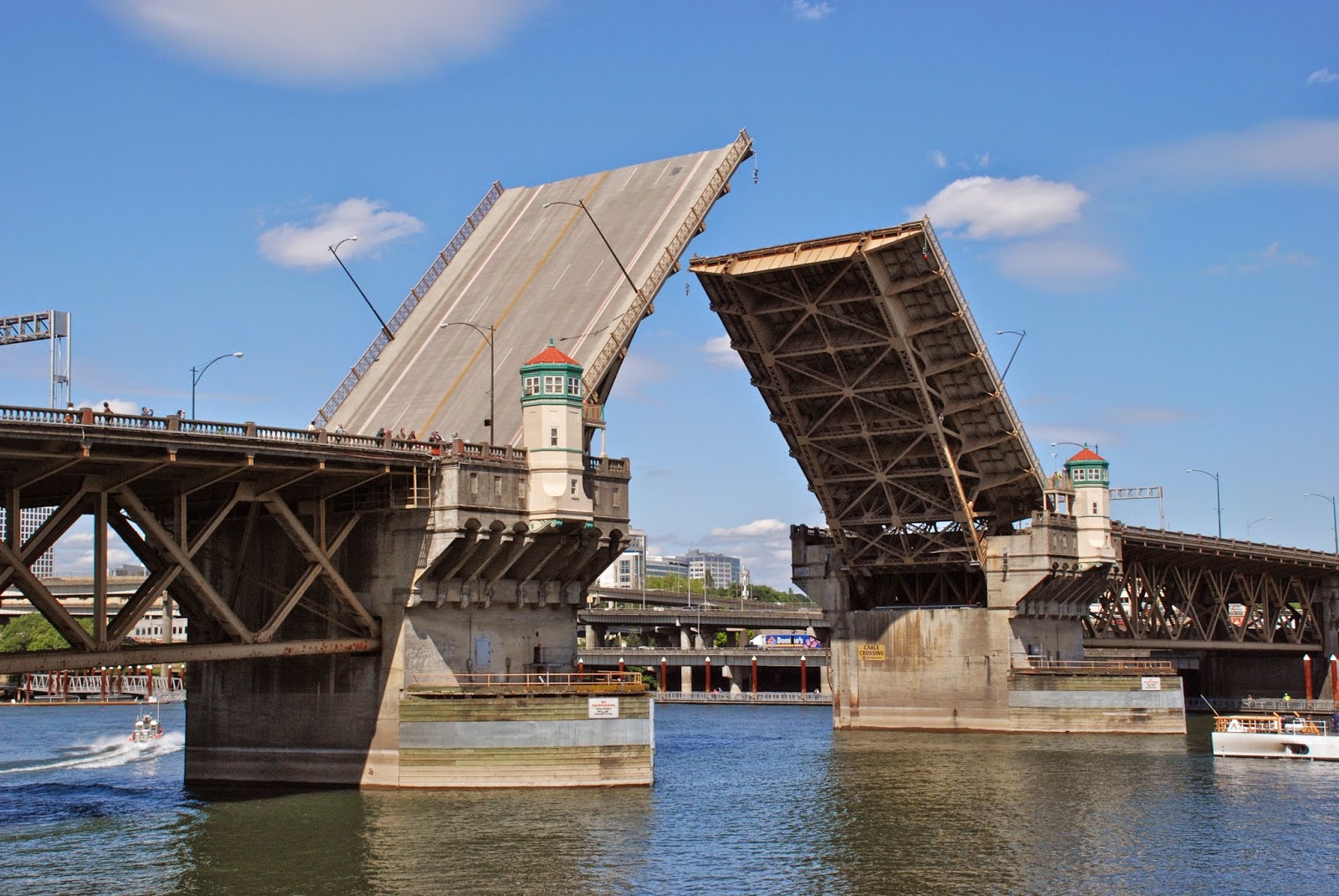 Morrison Bridge.  Completed 1958.  This one swings open like the Burnside Bridge above.  You can see the two operator stations there on the deck. 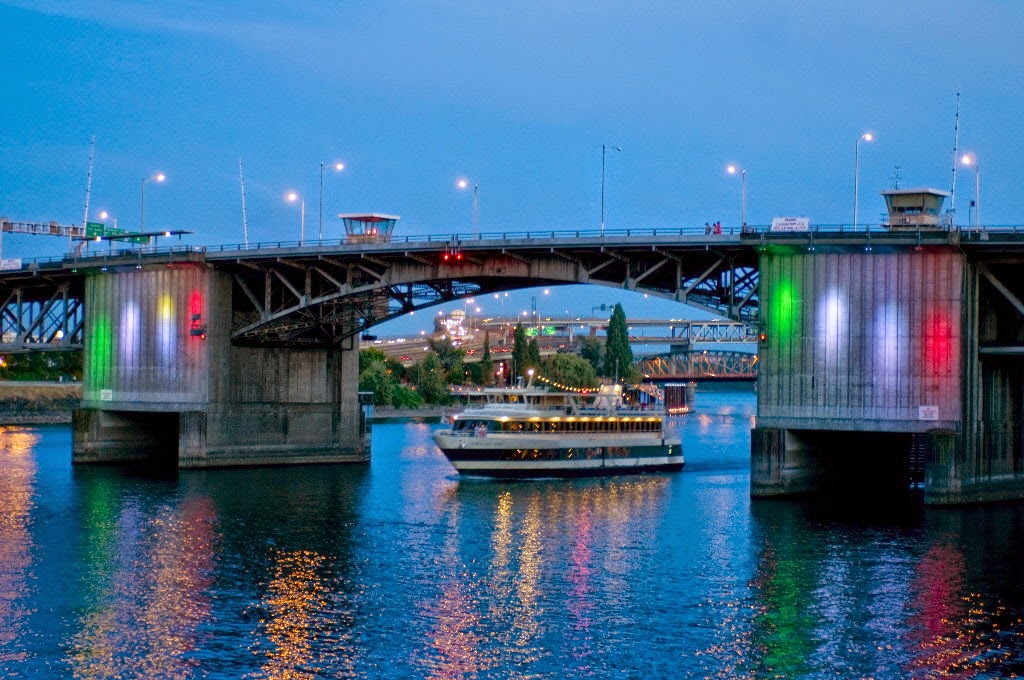 The Hawthorne Bridge, which lifts, opened in 1910.  The red things are the 800,000 pound counterweights that lift the bridge.   It carries about 8000 cyclists a day in addition to road traffic.  At the end of the bridge is an electronic sign saying how many bikes have crossed that day. 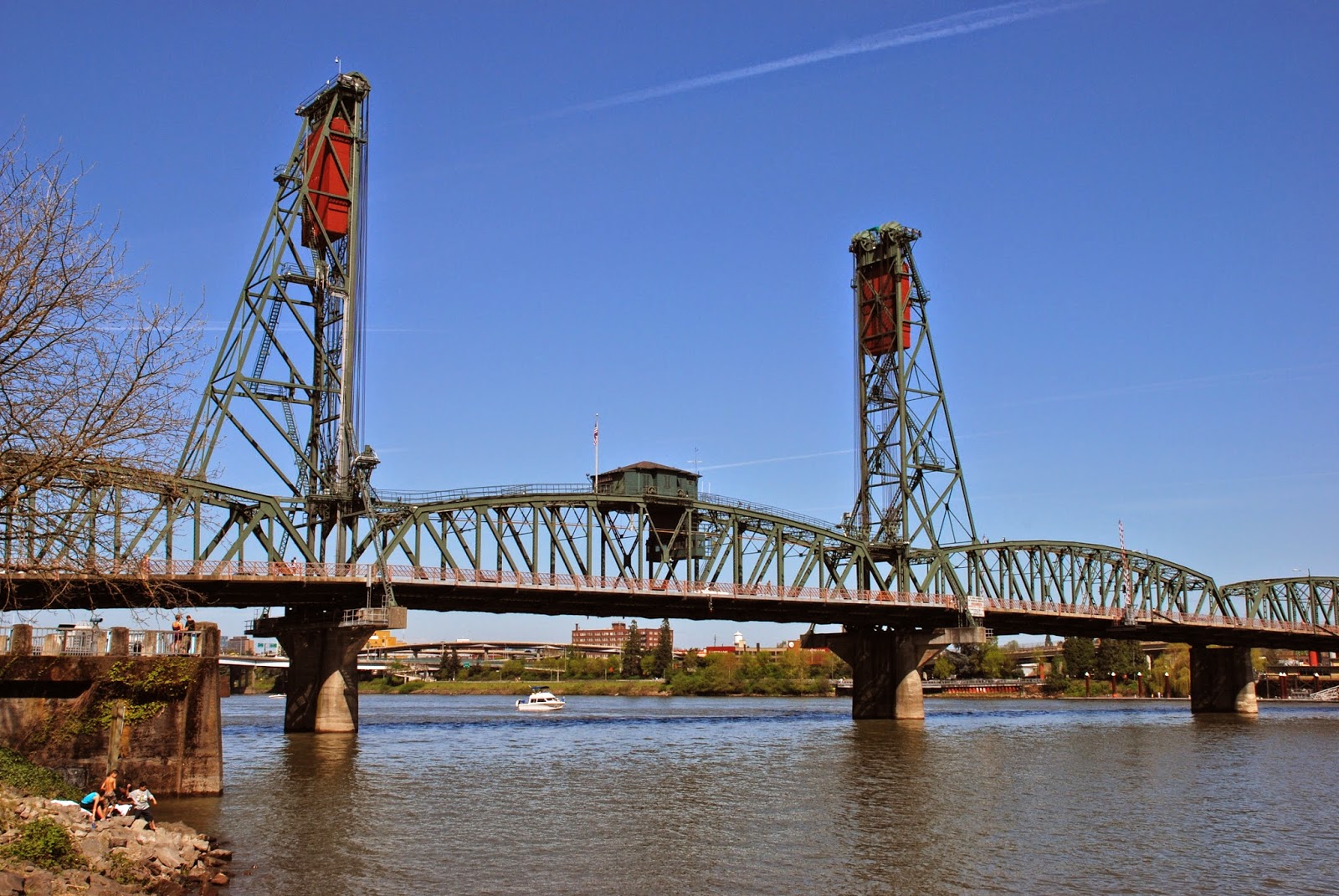 Marquam Bridge built 1966 and carries Intersate 5.  Was there a design contest that called for the ugliest, most utilitarian structure imaginable, one without beauty, style, or class?   Actually yes.  It was designed by ODOT, and there was such an outcry about its design that public input was encouraged when the Fremont Bridge was in the planning stage (and what a difference!).  Sadly, this bridge is here to stay for a very long time. 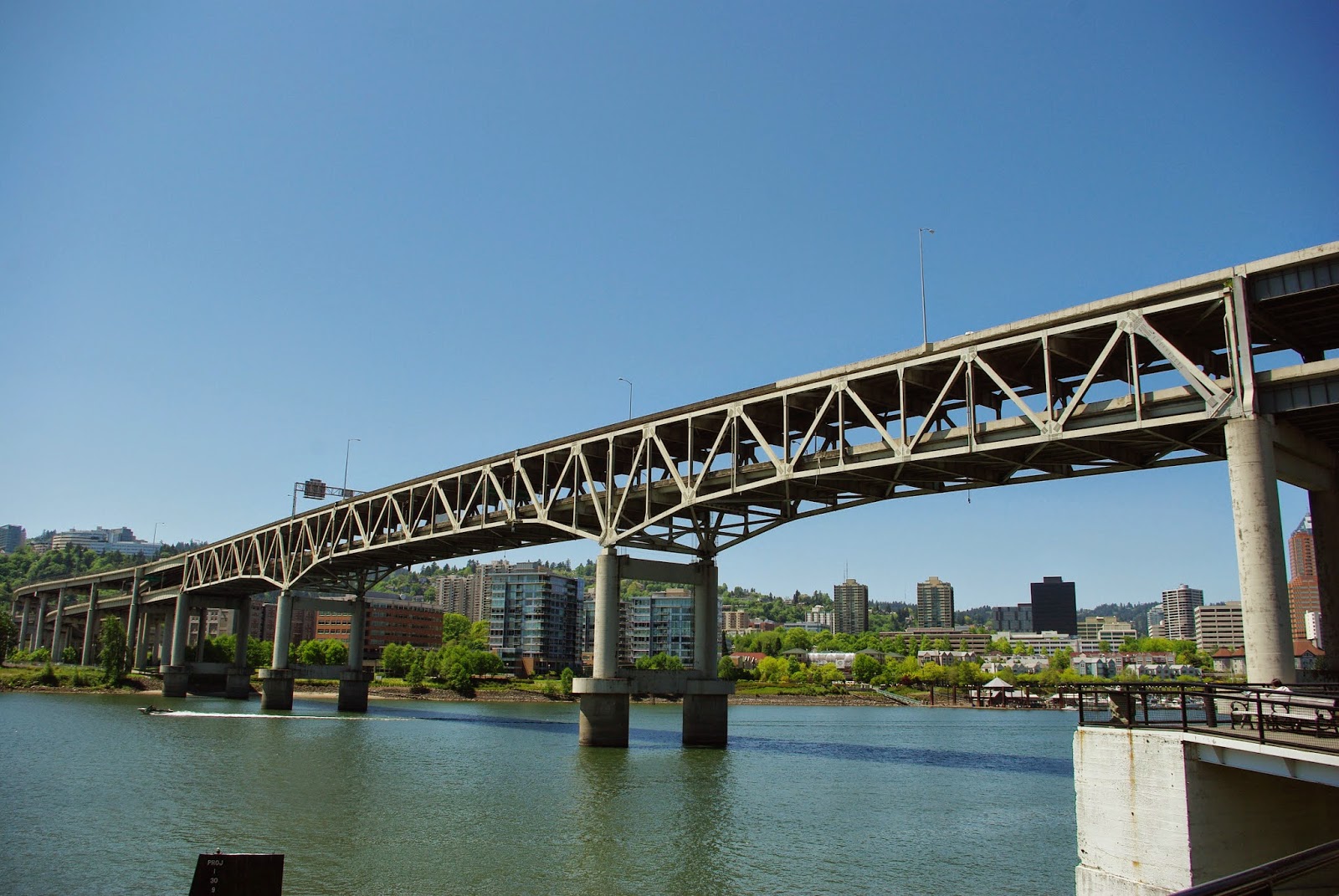 Tilikum Crossing.  The newest bridge on the Willamette, it's not open for business yet.  It has been interesting to see the building stages--it has been built from each side of the river, and the two parts met in the center a few months ago.  It is unique in that it will carry light rail, streetcar, buses, bikes and pedestrians.  NO CARS.  Completion 2015. 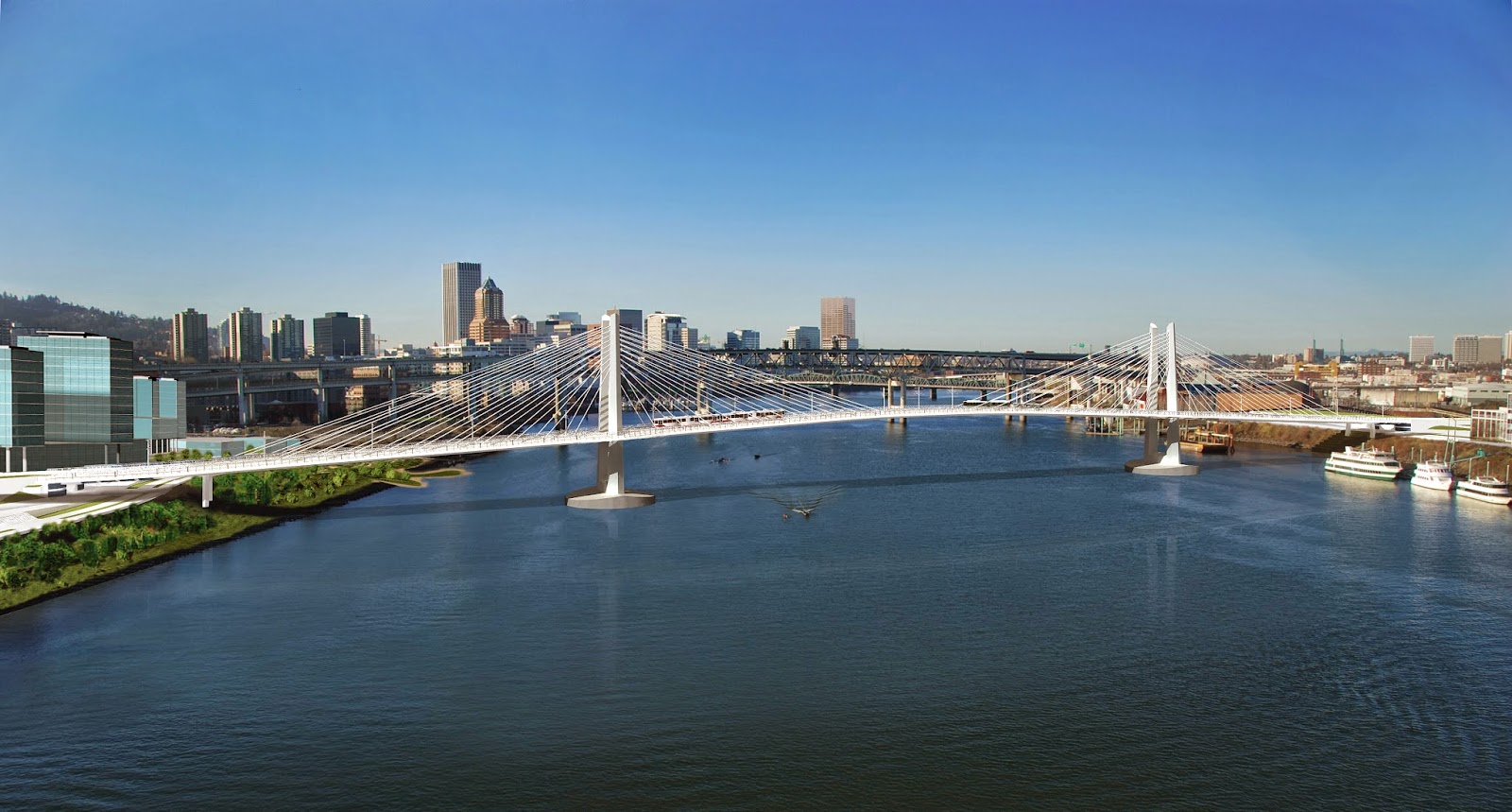 The Ross Island Bridge, built 1926.  This one has the craziest west bridge approach ever.  The first 10 years I lived here it was a white-knuckle sweaty experience learning my way on the approach. Signs are yelling at you "Turn here!!"   "Turn there!!"  "Get in this lane right now!!"  "Move to this other lane but only for 42 feet!!"  They should put up a sign that says, "Good luck folks." 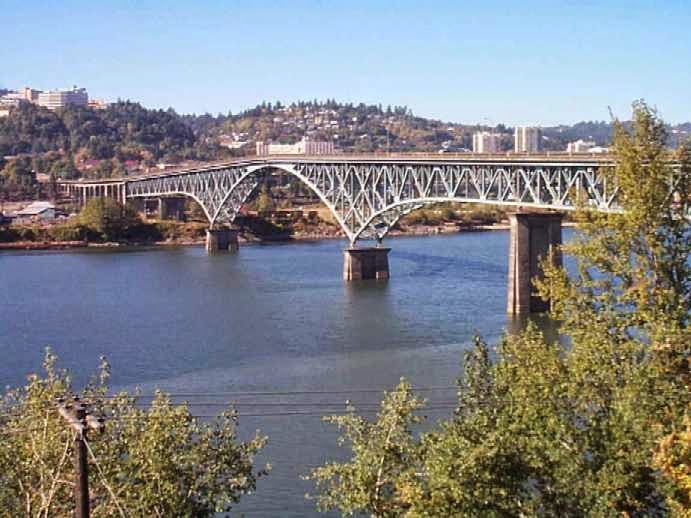 The current Sellwood Bridge, the furthest south of the Portland-area bridges.  Notice it does not lift nor does it allow large ships underneath, because that kind of river traffic stops at the Port of Portland further upstream.  Built in 1925, it is being replaced as we speak by the bridge in the photo further down.  The two-lane bridge carries way too much traffic and has been in a deteriorating condition for 30 years or more.  And, it has a little 3-foot sidewalk for bikes and peds, which on a busy span like this, makes you feel like you're Nik Wallenda on a tightrope. 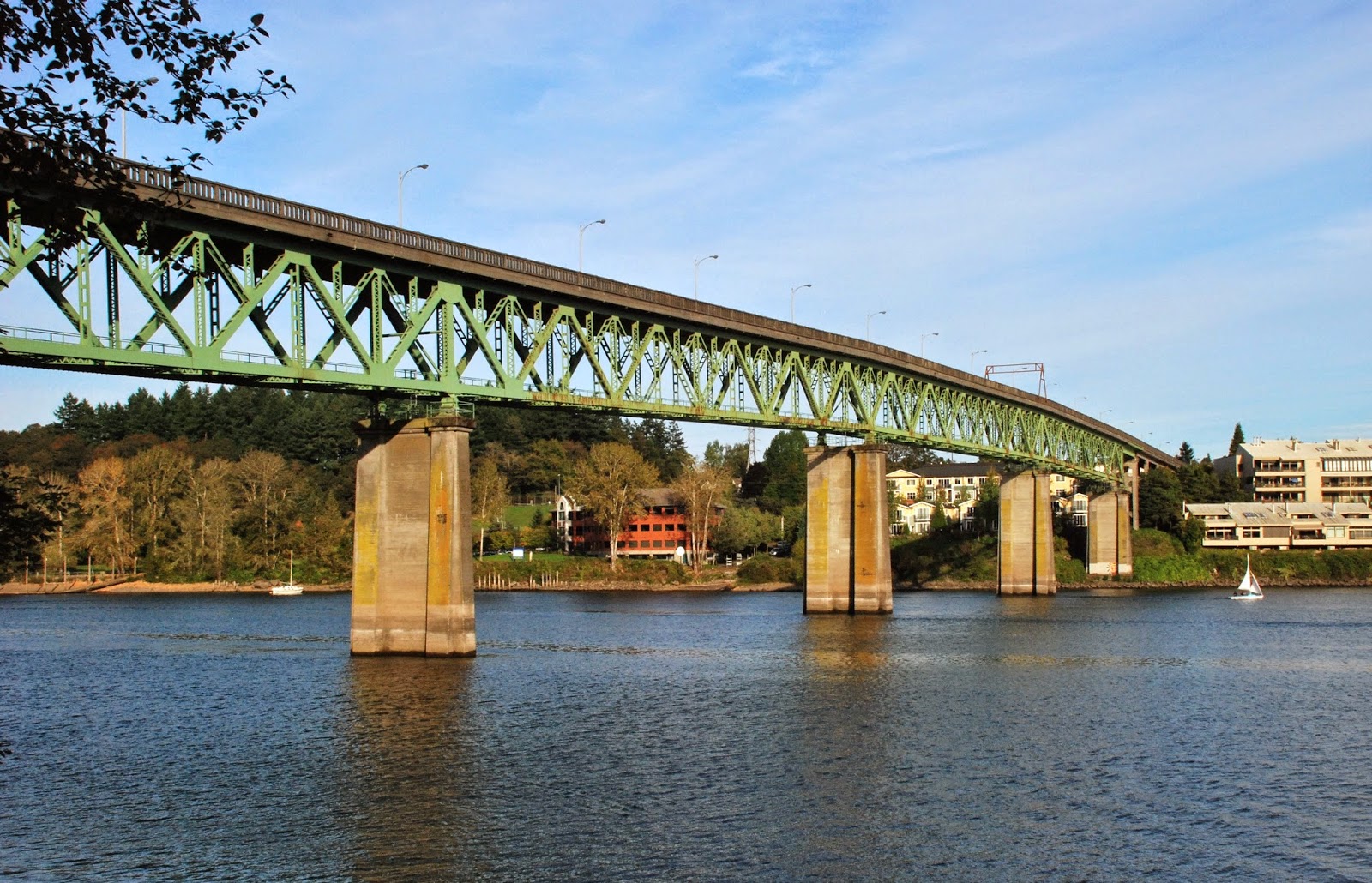 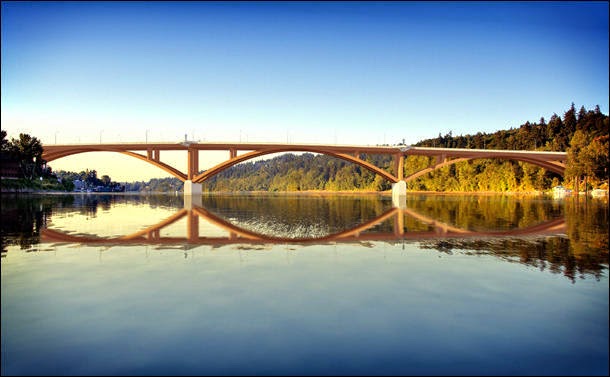 The Interstate Bridge spans the Columbia River between Portland Oregon and Vancouver Washington.  I believe it is the ONLY lift-bridge left in whole United States that carries an Interstate Highway--I-5.  Beware of getting caught near here during a lift; it will add an hour to your trip.  A multi-state/multi-agency commission recently studied the issue of this bridge replacement.  The question was, what to replace this aging bridge with, what would be the cost, and who would pay?   The commission went down in flames because nobody could answer any of those questions.  So we're stuck.  Even if I live to be a hundred, that won't be long enough for my mortal eyes to behold a replacement bridge here. 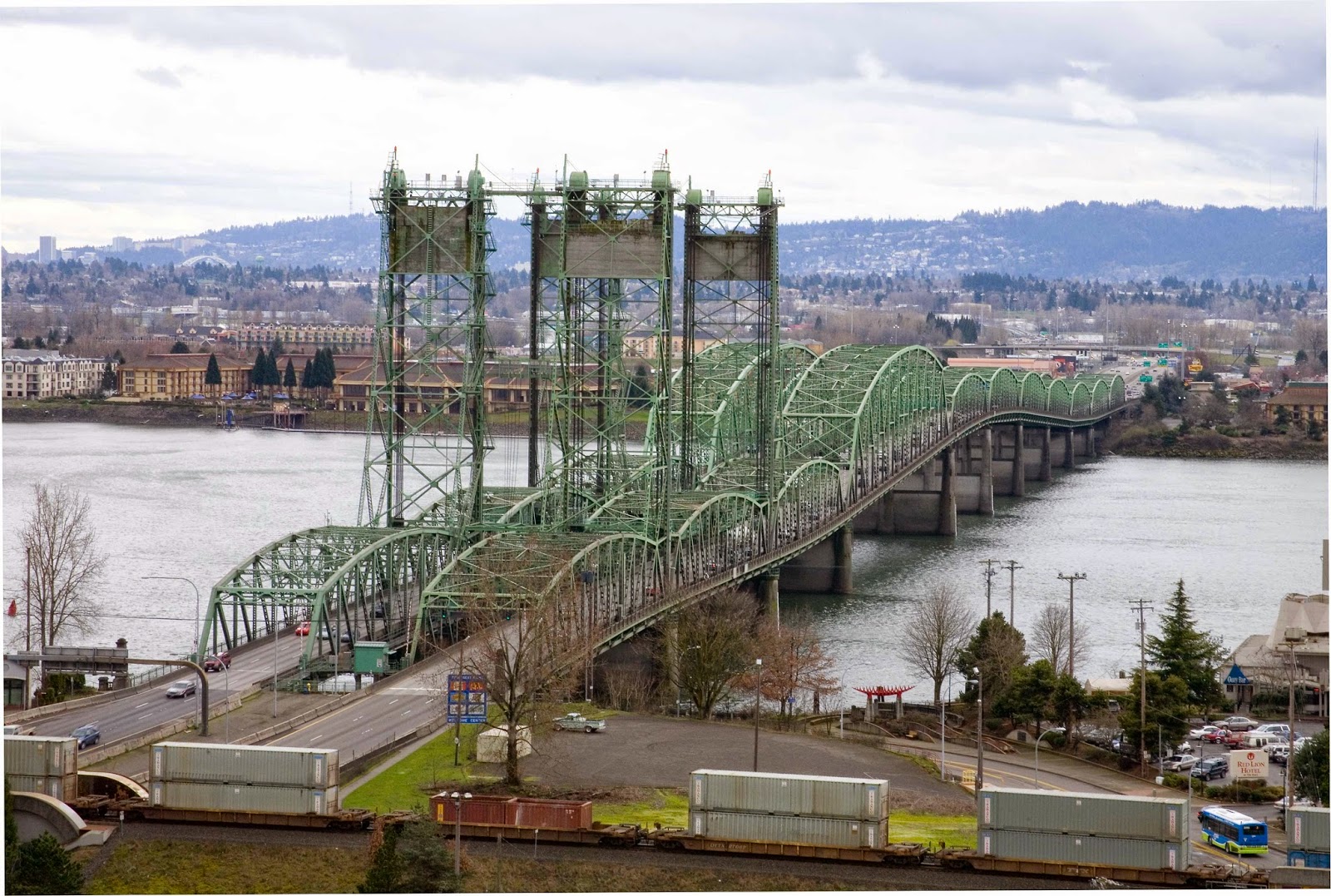