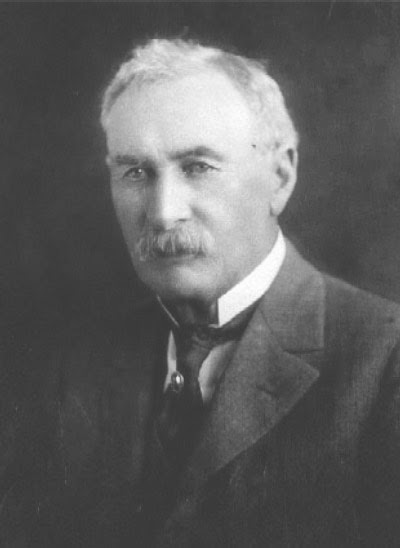 William Mulholland is memorialized in the name of the swanky, serpentine mountain road called Mulholland Drive that skirts the mountains north of downtown Los Angeles.  An Irishman, seaman, zanjero (ditch keeper), and brilliant self-taught engineer, he eventually rose to the position of superintendent of the Los Angeles Water Department.   When you know how important the management of water was in arid dusty burgeoning Los Angeles, you know that Mulholland rose to that post because he knew what he was doing.

Except when he didn't.  I'll get to that in tomorrow's post.

From the 1880s on, Los Angeles and the rest of Southern California was promoted to Easterners as a healthful agreeable place to settle, and the people came in droves.  They raised stock, cultivated farms, and before long the sweet aroma of tens of millions of lemon and orange blossoms wafted across the land.  The Mexican system of irrigation--ditches diverting the meager Los Angeles River--shortly became inadequate. 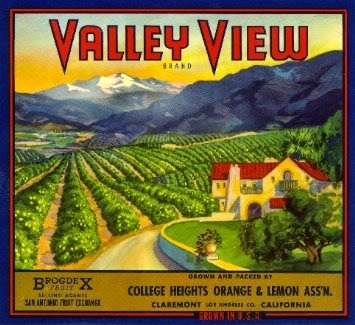 a Los Angeles-area scene, early 1900s; wouldn't you want to live here too?


Enter William Mulholland.  By 1887 he was in charge of water in Los Angeles.  Population boomed, growing from 50,000 in 1890 to 320,000 in 1910.  Los Angeles was and is a desert.  The Los Angeles River swelled only when rain or snow fell in the mountains.  Water would have to be brought in from somewhere else.  Somewhere else was the key to LA growth.  Somewhere else turned out to be the verdant, cultivated Owens Valley, 230 miles to the north.  Through a series of shady deceitful dealings by multiple people (including Mulholland), Owens Valley was drained of it's lake and river.  The water was channeled through a brand new massive aqueduct system to supply Los Angeles with liquid gold.  100 years later, that aqueduct is still imperative to the survival of that city.  A second system was added in 1970.

The terminus of the aqueduct was called the Cascades.  The pipe came from the north through a mountain at the northern most point of Los Angeles, and spilled through flood gates to the south.  Water, this expensive purloined water, tumbled down a channel into San Fernando Reservoir, a series of lakes that cradled the liquid gold Los Angeles craved. 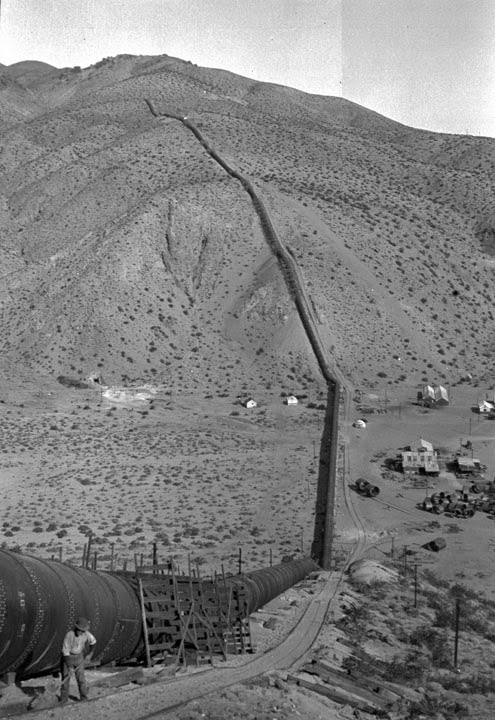 a portion of the Los Angeles Aqueduct under construction, 1913

I grew up in the shadow of the aqueduct.  I have passed the Cascades thousands of times.  I have seen the barren Owens Valley.  I have tried to visualize it as it once was: a place of verdant growth and abundant agriculture before Los Angeles got hold of it.  Hardly a year in the last hundred has passed without some aspect of Los Angeles's water-related transgressions tied up in the courts.

On November 5, 1913, a triumphant Mulholland stood at the steel wheel that would release the water taken from the few, for the benefit of many.  As he turned the wheel, Mulholland said, "There it is.  Take it."   And it was done.  Los Angeles got what it wanted, thanks to William Mulholland. 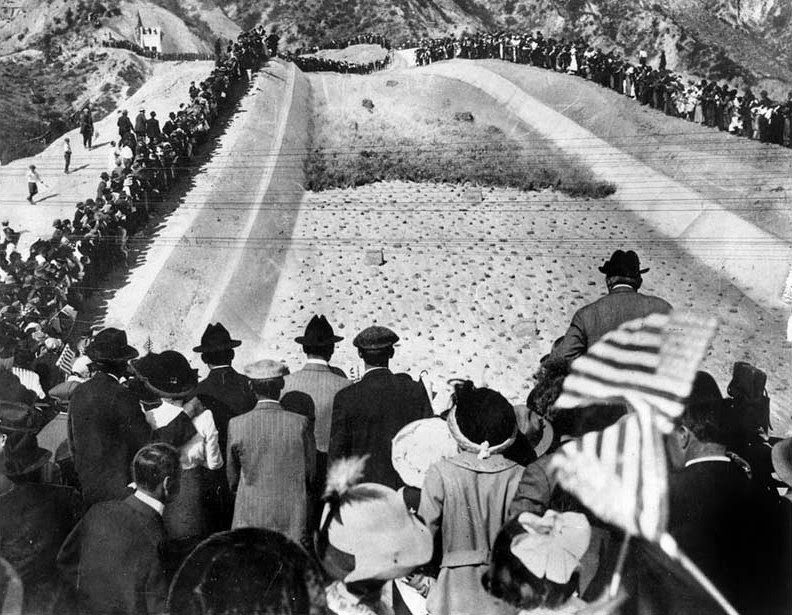 the first drops of Owens Valley water arrive at the Cascades to slake thirst in Los Angeles, November 5, 1913 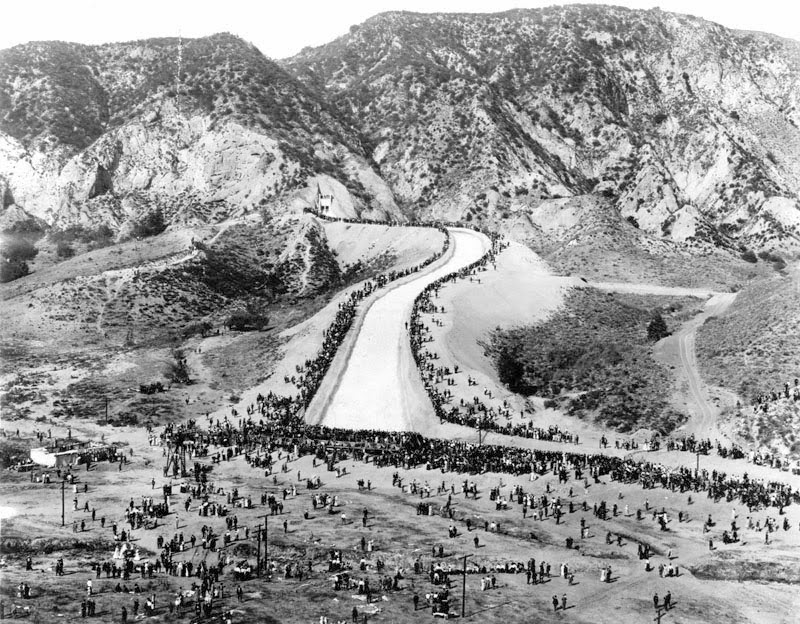 November 5, 1913: opening day at the Cascades, the southern terminus of the Los Angeles Aqueduct; Owens Valley water filled San Fernando Reservoir (not shown in photo), supplying LA with the water that further fueled its growth
(an interesting side note: Interstate 5 now runs horizontally where the long crowd of people is standing)


TOMORROW: "I Envy the Dead"