The Strange Disposition of Willie Keel 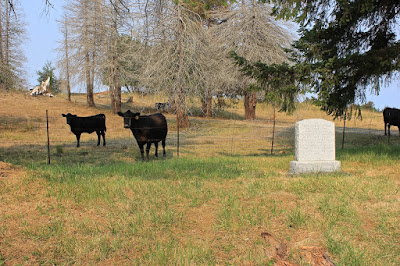 the resting place of Willie Keil in Cowlitz County, Washington

Willie was born in Missouri about 1836 to a father who was leader of a religious sect.  The Bethelites, as they were called, decided to head West in 1855 in search of their own personal promised land.  Practically on the even of departure Willie contracted malaria.  He insisted on a promise from his father to not leave him behind, no matter what happened.

Willie's father kept his promise.  On Willie's death a special coffin was built to transport him to the promised land with the rest of the Bethelites.  The coffin was lined with lead and Willie was laid inside.  Jugs and jugs of whiskey were poured into the box until Willie was immersed in alcohol.  The lid was nailed on, the coffin loaded onto a hefty wagon, and the party headed west with the young man saturated in 100 proof.

Six months later the party arrived on the Washington Coast and Willie was interred.  Sadly, the gloomy sodden land was not what the pioneer group was looking for.  They packed up and moved south to Oregon, leaving Willie's stone-marked grave behind.  The colony they founded in Aurora is in a lovely fertile place where even now, hops and berries and flowers are commercially cultivated.  Schoolchildren take field trips to Aurora and are told the curious tale of Willie Keil.