I'm Lucky To Be Alive 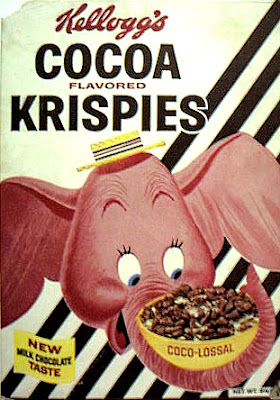 I ate bushels of Cocoa Krispies, yuck
Twenty-first century-ers are gaga over health-food, or, should I say, food that is touted by somebody, somewhere, to be healthy for you. Hardly a week goes by without media fanfare highlighting some miraculous new food that will  a) boost energy,  b) improve sex-life, c) detoxify (whatever that means),  d) make us sleep better, e) make us live to be 100, f) prevent a host of diseases including the big C, or g) all of the above. Celebrities are often proponents of one miracle food or another, and folks follow like sheep.

Trendy foods need not be pleasing to the palate--kale or fermented mushroom yuck come to mind. Proponents emphasize that the worse it tastes, the better it must be for you. These are the foods that become an overnight sensation with a rock-star following. Not that certain foods didn't become a health holy-grail in past generations--some did. But without the far-reaching tentacles of modern media, not to mention social media, food movements were a local flash-in-the-pan. An exception was the practically national about-face from butter to margarine around 1960. Butter==bad. Margarine ==good.  I remember this one because my Dad's high cholesterol forced our switch to margarine. We drank the kool-aid and stayed with margarine until about 20 years ago, when new information showed margarine's healthier hype to be a big fat lie.

Well, the purpose of this post is really to talk about a few super unhealthy foods I consumed in childhood. Most I wouldn't touch now with a ten-foot pole, but I still dream of fried bologna, the original 'heart attack on a plate.' Get a cast-iron skillet, sizzle a stick of butter, throw in the bologna until the center puffs up and the edges are crisp, and you have a meal fit for a king. My sister fried me some a few years ago and I tasted all the good memories of my childhood in every bite. 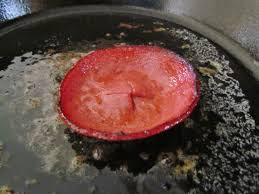 fried bologna, one of the most heavenly foods ever 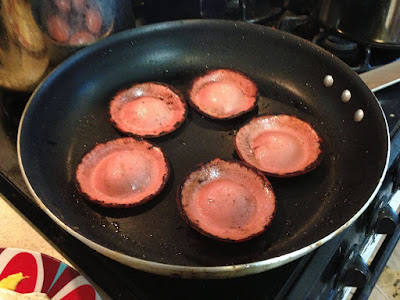 you know you're doing it right when they resemble little sombreros 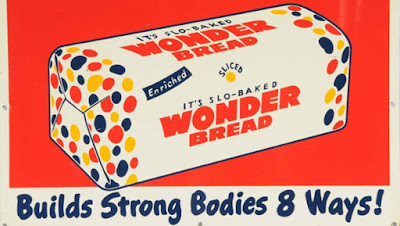 Butter sandwiches. Mmm, my daily lunch during my pre-school years. Mom placed square slices of cold butter on the nutritionless white Wonder bread--no spreading the butter--it was delish. One small confession--we ate the generic version of Wonder bread, which was cheaper.

Cocoa Krispies. There isn't a food on the planet with less stick-to-your-ribs. Or nutrition. But I ate bushels of it.

Raw bread balls with a side of crusty pinwheel--these kept me alive from elementary through high school. Step 1) take a slice of white bread; 2) carefully peel the crust off into one long-strip; beware, if it breaks, then you can't make a proper crust pinwheel; 3) roll the crust up tight into a pinwheel; 4) squeeze the white part of the bread in a closed fist until the air is gone and all you have is a blob of dough; 5) eat the dough ball first; 6) hold the crusty pinwheel vertical and bite into it--if you see the many striped layers of crust in front of you, you'll know you're doing it right. 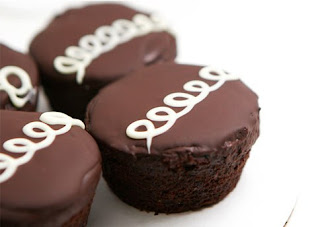 Twinkies--do they still make these? Now they sound pretty gross to me but we didn't get a lot of treats back in the day, so. Maybe these aren't actually Twinkies, but were called cupcakes. Anything chocolate tasted good to me. Still love chocolate but my tastes are more refined now. Even though the bar was lower then, I can't believe I ever thought these were tasty:

Another version of Twinkie cupcakes, but with pink coconut all over it. Yikes.