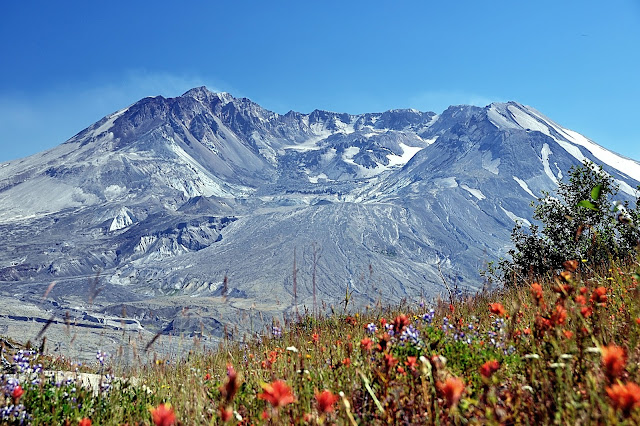 St. Helens from the north; we climb from the south and stand on the rim at the center top; the bulge in the crater center is the lava dome

After summiting Mt. St. Helens some years ago my friend and I decided we should do it about every five years or so, just to see if we still could. It's a brutally hard climb for me. Others who have strong constitutions and fabulous lung capacity breeze up the slopes easy as I climb a flight of stairs. But that is not my gift, and really isn't even within the realm of my capability. I do it anyway, in my own snail-ish plodding way, because: active volcano plus geology freak = must experience.

I climbed successfully for the first time about 1997, then 2006 and 2011. Back in 1994 I got maybe halfway when climbing with a group of high school students. The wind was terrible that day and when snow began to fall we aborted the attempt.

In 2016 it was time to try again, but my knee was giving me trouble so we put it off. This year I was not excited about making another effort, and didn't think it was possible for me to summit. But what the heck, why not give it a go.

My friend and I camped overnight at Climbers Bivouac, same as we have done previously. We hit the trail at 5:30 a.m. and watched the forest gradually grow light as the sun rose. The weather was biting--probably in the 30s, and crazy windy. Never fear, I wore a thin wool long-sleeve base layer over my shirt, base layer leggings under hiking pants, a thin wind-proof shell, wool socks, hiking boots, gloves and head cover. 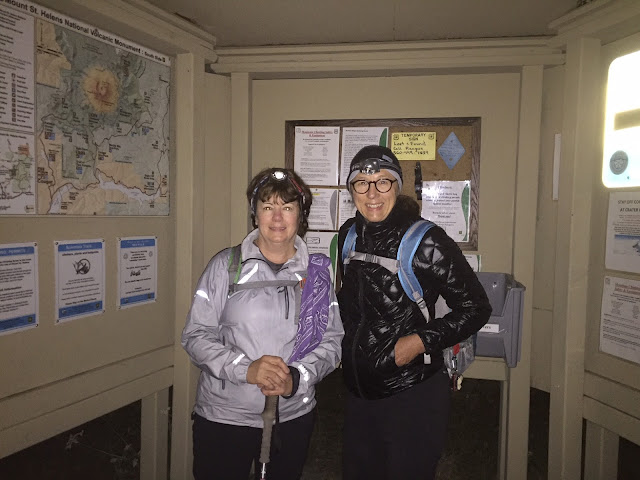 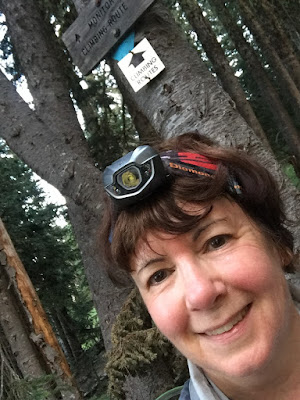 After about 2.5 miles on the upward forest trail we began the climb through the rocks.  Out in the open the wind shoved us around. My sunglasses kept the blowing ash and cinders out of my eyes. The huge rocks take a ton of energy to navigate. My short legs keep me from leaping gracefully from rock to rock like a mountain goat. I'm more of a lumbering groundhog straining to heave my bulk up to the next level.

Out of the rocks and about a thousand feet from the summit, I bonked. My blood sugar hit the basement which startled me, because I had been eating the right foods at regular intervals all the way up. My progress was halted within sight of the goal. Elated climbers were lined up on the rim above. So close and yet so far.

After a rest I resumed the climb with a sensible tried-and-true strategy. If I put one foot in front of the other and counted out 100 steps between rests, and didn't think about how far it still was to the summit, then it could be done. And the strategy was successful! It seemed like an eternity, but there I was on the rim gazing down into the smoking crater. Forest-fire haze closed the curtain on the usual views of Mounts Adams, Hood and Rainier. But still, what a glorious place to be. 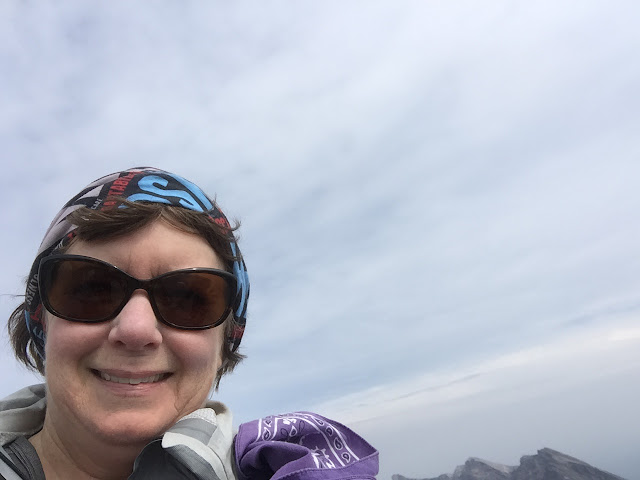 On the descent we slid quickly down the ash slope, then came face to face with the rocks. It's even less fun going down through them than coming up. This time we skirted below them on the west side until the forest trail picked up to the east. The climb up took 6.5 hours, an hour longer than my longest previous climb, and 1.5 hours longer than my personal best. The descent? Probably 4-5 hours.

As usual we celebrated our success at Burgerville USA in Woodland, Washington. When the server asked if I wanted whipped cream on my hot fudge sundae, I thought: "Heck yeah! I just expended a zillion calories climbing MSH!"

Will I do this again? C has his instructions: if I ever talk about climbing MSH again, he is to take me out to the back 40 and put me out of my misery. 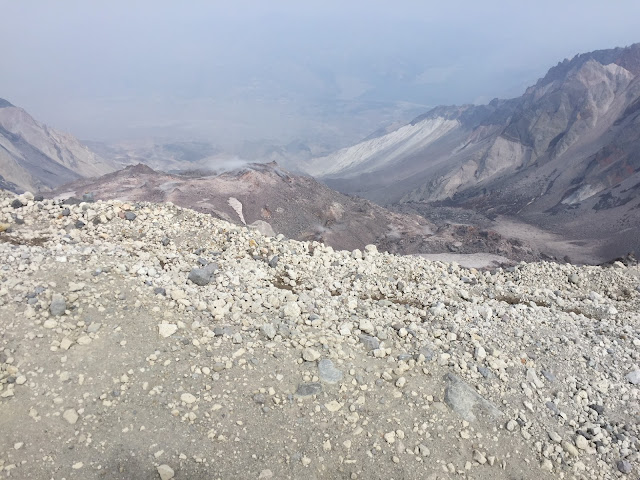 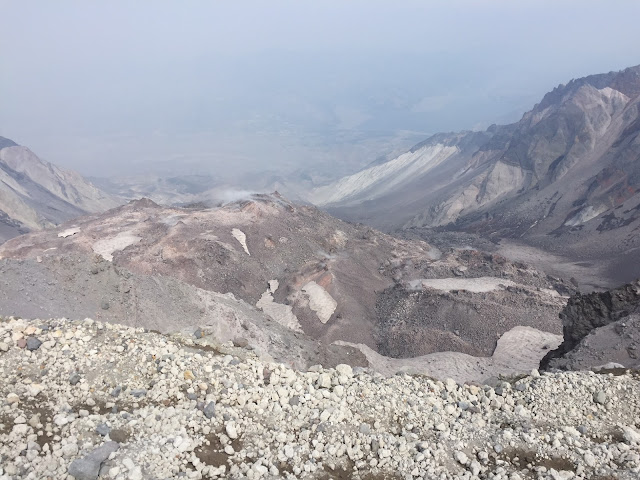 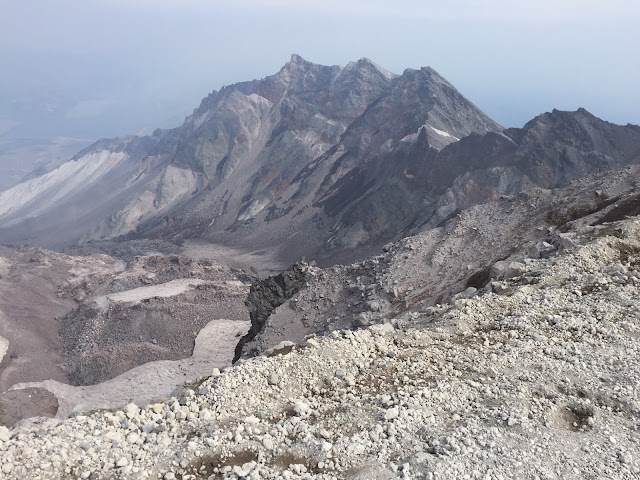 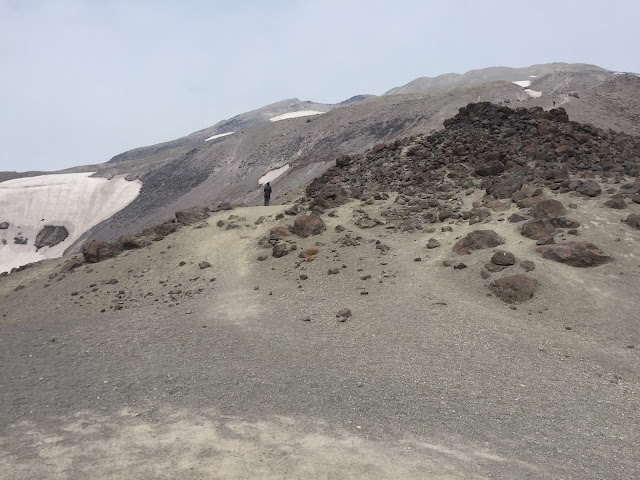 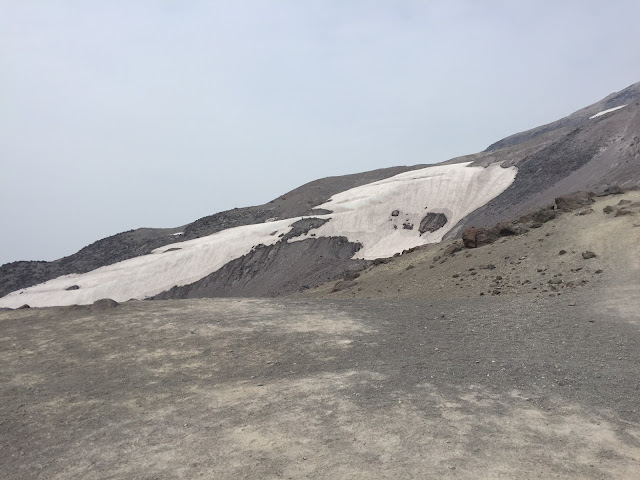 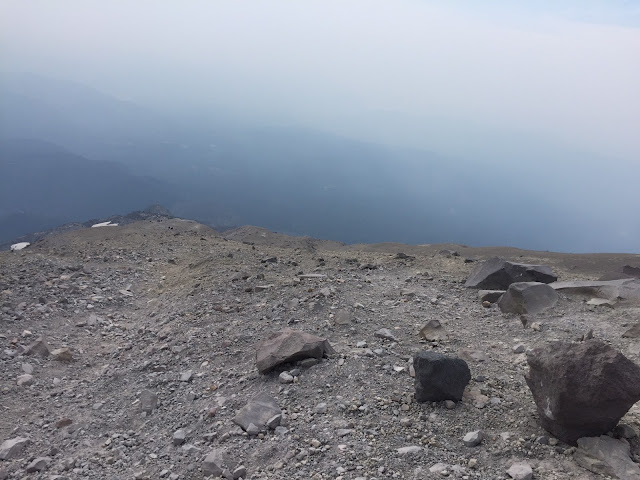 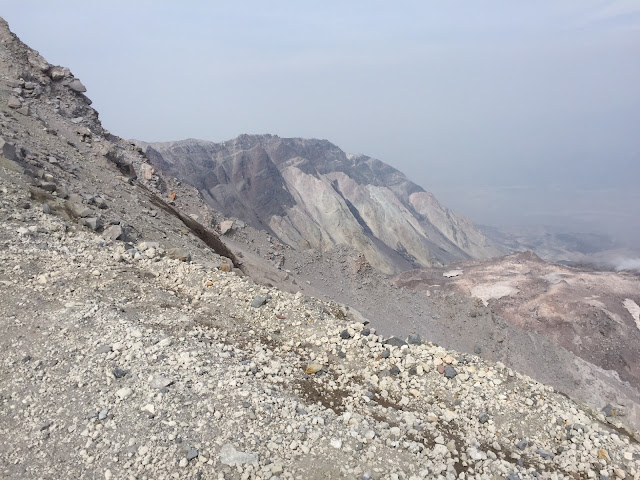