Once in a while Mom headed out from our Valencia home to Saugus or Solemint area to do errands. The only way out there was along narrow Soledad Canyon Road, whose gentle curves followed the south bank of the Santa Clara River.

What a treat it was to skirt the broad river channel. It was a dry bed until we had rain; then it could writhe and rage like the banshee in a sour mood. But on the plenty dry days we kept a sharp lookout for the telltale dust cloud that belied the presence of the Basque sheepherder and his flock.

As our car sped east along the channel, the gritty cloud hid its load until the shapes of scampering sheep emerged. They looked like drab dust-bunnies with legs. On and on they came. Behind them the cloud parted and the sheepherder himself appeared. He wore dark pants that matched his dark hair, with some kind of throw over his shoulders. I'm pretty sure he carried a straight staff as he strode with his canine companion. 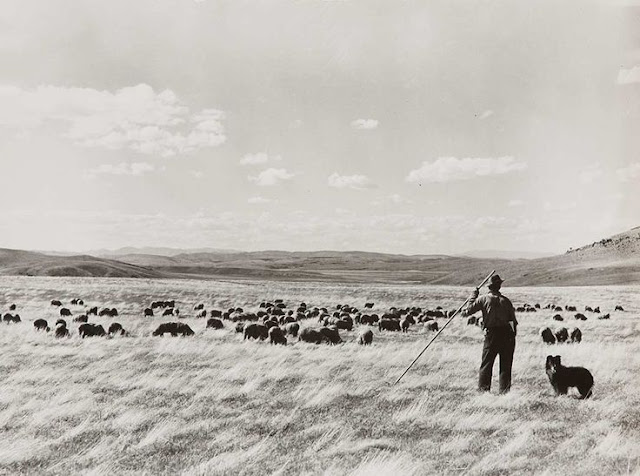 a similar view to what we used to see in the dry Santa Clara River
photo from shorthairstyle2013.net

I marveled that one man exercised perfect control over hundreds of animals. I suppose the sheepherder moved his flock up and down the riverbed to gain fresh forage. Where he came from and how far downriver he went, I don't know for sure. A few towns a ways north of us had Basque settlements so one of them was probably home. The riverbed was the ideal highway for driving the flock, at least in the dry months.

Basques settled the American West in the past century, largely in California's Central Valley, eastern Oregon, northern Nevada and southwest Idaho. Sheep was and is their business. I never actually met a Basque until we lived in Idaho in the late 70s and early 80s. Her name was Ruth Arrizabalaza. I have eaten in a Basque restaurant and found the food delicious, and not unlike the meals my Baba used to cook--cabbage and potatoes, lamb and beef, and always bread.

In southern Idaho the Basque sheep camps look like this photo below. On cold winter days smoke curls out of the stack and it's not easy to see the sheep. They're the same color as their surroundings. I've seen pictures of Basque Country in northern Spain. Its lush green mountains are nothing like the desolate areas they have settled in the US. Next time I meet a Basque I will ask about this, why they have flocked (!) to areas so unlike their homeland. 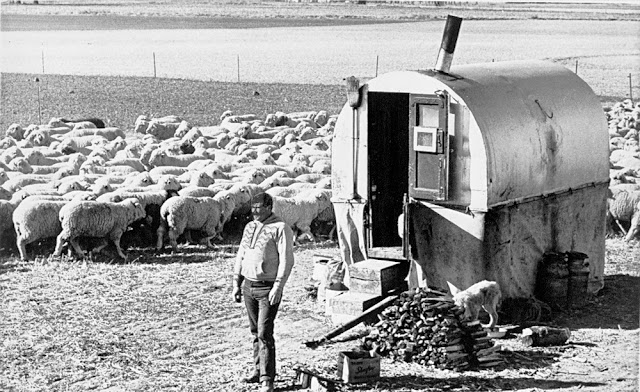 a similar view to Basque sheep camps in southwest Idaho
photo from wonnellvisit2014.blogspot.com