No Green Cheese in Sight! 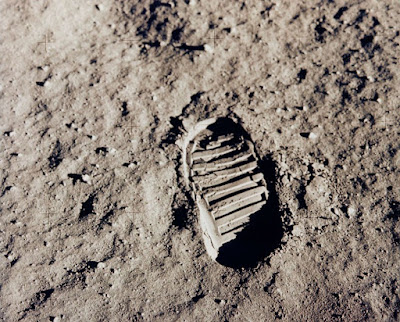 I can't let this day go by without mentioning the moon landing, the greatest single event of my childhood. What a vivid memory I have of sitting in front a color TV in the living room of our close friends, the Price family of North Hollywood CA, and watching together both the landing and the first walk on the moon. I was 14 years old and it was my father's 48th birthday, July 20 1969.

The room was full of mile-wide smiles, hearts thumping in chests, and tears in eyes. We marveled at the stupendous accomplishment by the American space program. For all we knew, the moon was made of green cheese. During my childhood this was a common phrase, not that people believed it, but it was symbolic of the mystery of Earth's moon and outer space in general.

When I was six or seven, my father told me that men would land on the moon when I was 14. The event occurred as he said, and I marveled at his prescience. Some years later I learned of President Kennedy's speech declaring that a moon landing would occur before the decade ended, and then I knew how Dad got so smart. My growing years were punctuated with the thrill of rockets defying gravity, space ships escaping earth's orbit, and brave men gladly enduring discomfort and even misery, while knowing they might not return. I still get teary watching a film of an Apollo rocket lifting from the launch pad awash in a blast of fire and smoke.

We have watched Apollo 11 several times this month, along with a documentary detailing the race to the moon. And it was a race, a space race, a war of ideology. America won, but in actuality, humanity won. The accomplishment was a source of wonder and pride for individuals in every country, and indeed, a large portion of the Earth's population viewed the landing live. Huge TV screens were set up in metropolises around the world where fascinated crowds gathered to participate in an event that seemed impossible even a year before. Armstrong expressed it perfectly, "That's one small step for man, one giant leap for mankind," the first words ever uttered from the surface of the moon.

Early this morning our newest grandson was born, and several of us helpfully suggested names for him: Apollo, Buzz, Neil Armstrong, and other lunar-related names. The parents won't take us up on those, of course. In the future we can tell this little guy where we were and what we were doing exactly 50 years before he came to the Earth.

This one is a narration by Walter Cronkite about the moon landing
Posted by Suzanne Bubnash at 11:49 AM