Hope I Look This Good At 97

Today I'm purloining an article from the LDS Church News. It's not an earthshaking announcement of new doctrine, or a synopsis of a really good talk. It's notable because these people, who don't look a day over 75, have been married 80 years! 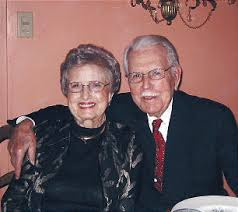 "Don't take marriage lightly," counsels Laver Robinson. "You have to have a strong determination to make your marriage a success."


Any wise marriage advice from Max Robinson and his wife is backed by 80 years of experience. The couple, members of the Sierra Ward, Fresno California West Stake, will celebrate their 80th wedding anniversary Nov. 1.
With both of their fathers out of work, they felt fortunate to have jobs and decided they could do better on their own. On Nov. 1, 1929, at the age of 17, the two traveled to San Jose where they were married by a judge. "Needless to say, when our parents found out they weren't too happy with us," Sister Robinson said. "My father said it would never last."

Those words, however, served as further determination for the couple. They made a decision to prove him wrong, Sister Robinson said, and they did. A strong sense of commitment is one thing that has assisted their long marriage. "There are times where you think, 'This isn't worth it.' But then you work it out."

"People say, 'You can't be 97,'" Sister Robinson said. She insists that their youthfulness can be attributed to living a clean life in accordance with the Word of Wisdom, not giving in to despondency or depression, and keeping active. Brother Robinson, who turns 98 on Nov. 14, still works twice a week doing public relations. work for one of his grandsons. "I'm too young to retire," he insists. "We've had a beautiful time [celebrating our anniversary] but now we'll buckle down and get back to work," Sister Robinson said.
Posted by Suzanne Bubnash at 7:25 AM