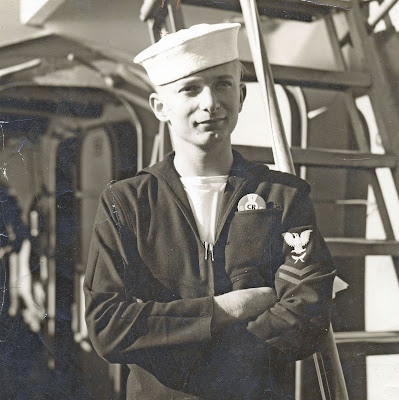 My father, George Bubnash, was born and raised in a little Pennsylvania coal town during a time when the coal mines were going full bore, coke ovens were stoked and glowing, and steel mills were blazing away. The Depression changed all that, slowing down work and leaving some miners destitute. Dad once said that FDR was the working man’s hero because of the social programs put in place to help the downtrodden. His mother hung a photo of Roosevelt in the living room.

Dad graduated from high school in 1939 and went straight to work in a New York restaurant--no coal mining for him. Two years later the Japanese bombed Pearl Harbor and when Dad’s draft notice arrived in 1942 he marched right down to the Navy enlistment office and signed up.

For the next two years he worked at the Naval Education Center at 90 Church St. in Manhattan. In 1944 he went to sea on a brand new battleship—BB63--the Mighty Mo--the USS Missouri. He was a Yeoman Second Class. He sat high in the conning tower relaying messages for the Captain. Going through the Panama Canal to the Pacific, he recalled that the Missouri was so large that there were just inches between her hulk and the concrete edge of the locks. The ship arrived at Pearl Harbor on Christmas Eve, 1944. Dad went ashore and was treated to a hot dog for Christmas dinner.

In 1944 and 1945 war escalated in the Pacific. The Missouri fired her 16-inch guns at the Japanese Mainland, Iwo Jima, and Okinawa and Dad was surprised he didn’t lose his hearing in all that din. In April 1945 a kamikaze hit did minor damage to the ship. The captain ordered a full military funeral for the pilot, including burial at sea under a makeshift Japanese flag and a 21-gun salute, because as he said, even the enemy pilot was a human being doing his duty the best he knew. Dad shed tears when he told this story, as did I listening his moving account of respect shown an enemy who was out to kill them.

The Missouri sailed to Leyte Gulf, Guam, and an atoll named Ulithi. Near the close of the war she served as Admiral Halsey’s flagship for the Pacific Third Fleet. The formal ceremony to accept the Japanese surrender was held on the Missouri, but Dad wasn’t present. His duty that day was on shore guarding officers on the Japanese Naval Base.

After the war Dad spent a few more years in the Navy and Navy Reserve. The GI Bill paid for the impossible dream of a coal miner’s son—college tuition to Carnegie Tech (now Carnegie Mellon). As his children were growing Dad quietly made us aware of his service during the war both on and off the Missouri. Those years spent doing his duty never faded in importance to him or to us.

In May 2004 I was visiting Dad at his home in Pennsylvania. The World War II Memorial was  opening that week in Washington DC. I prevailed on him to take a trip down to visit it—it took a lot of convincing on my part to get him there as he wasn’t feeling well. The area was a buzz of activity preparing for the tens of thousands who would be arriving in two days for the dedication.

The memorial is divided into two areas, the Pacific Theater and the Atlantic Theater, and each US state is represented. We saw elderly men with their children and grandchildren, doing the same thing we were. The photo below was taken in front of the Pacific Theater area where some of the battles he participated in are inscribed in stone.

As we were leaving a volunteer took our picture together. Then she put her hand on Dad’s arm and said, “It’s a little late, but thank you . . . thank you for your service.” We couldn’t speak for a good 10 minutes after that. Later I asked Dad if anyone had ever thanked him for his service and he said, “No.  No, I don’t think so.” But of course, he never looked for thanks. He was just doing his duty.  And when he passed away a few months later, an etching of the Mighty Mo was inscribed on his gravestone. 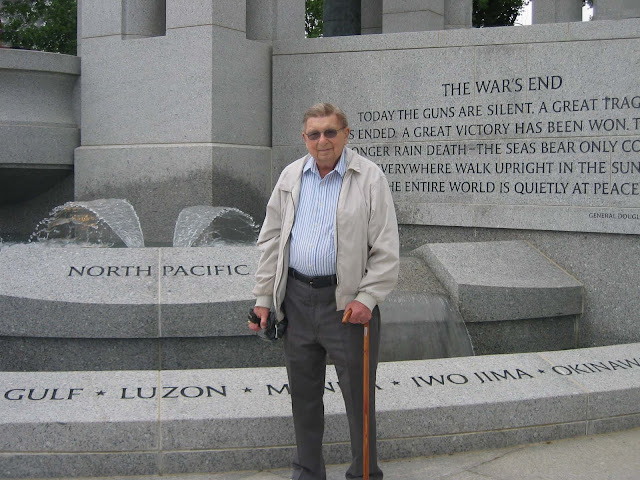 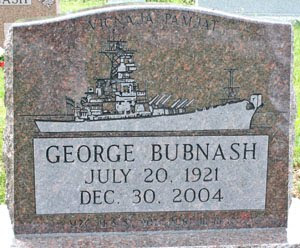