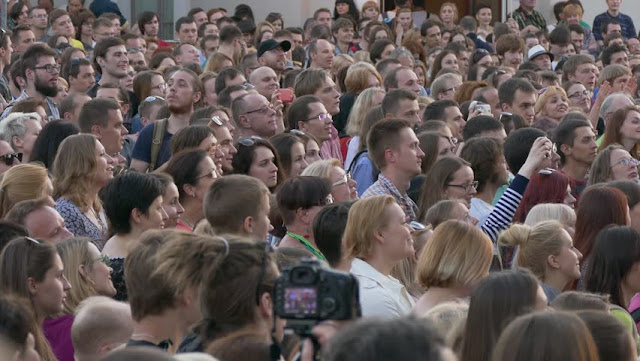 Steven had a voice lesson at Liberty High School on Tuesday. We rounded the corner by the high school and were greeted by the chaos of hundreds of people milling about in the street and jockeying for position in a line that appeared to wrap around the campus. There were police cars with lights flashing parked on the street and in the parking lot and officers were keeping order the best they could by directing the heavy traffic away from the school.

My first thought was that some rock star was making an appearance or something. Why else would there be such madness at an obscure Hillsboro high school? But what would a rock star be doing at said obscure campus? We only wanted to park in the lot to make it to the voice lesson on time. The lot entrances were blocked by orange cones or police vehicles and cops were directing cars to bypass the school and keep going down the road. At one point I was able to tell a cop we had a voice lesson. He directed us to the furthest lot entrance and gave us permission to enter there.

Then we came upon Mr. Grouchy Deputy who was adamant that no one was going to get into that lot, even to save their lives. He violently gestured at to me to do something--he kept yelling while pointing at the ground in front of him, and I didn't know what that meant, so through the open passenger window I told him what was up. He wasn’t pleased. In fact, he looked downright scary and maybe he was going to impound my car or something. He hollered, "Are you here for the clinic?" Ah-ha, could it be that we had stumbled unknowingly onto an H1N1 clinic? No wonder the “rock star” vibes. He let us in, we went our way, and we confirmed with the voice teacher that there was an H1N1 clinic. By the time we left the line had no end. Hundreds must have been turned away. Oh well, there’s another 'rock star appearance' coming up on Saturday at our very own Westview High School.
Posted by Suzanne Bubnash at 6:00 AM