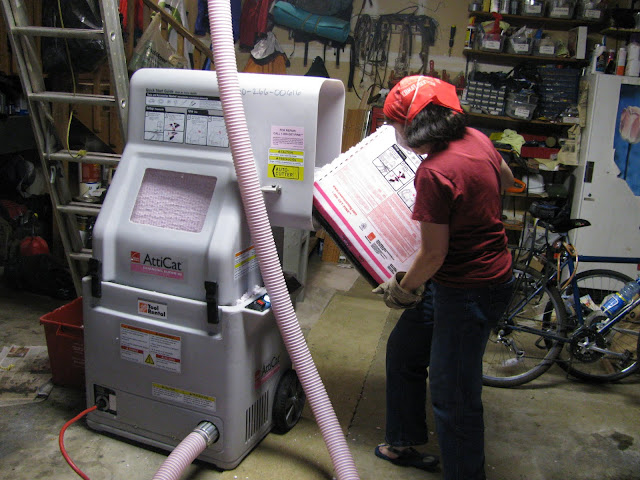 In May we remodeled our kitchen. Part of the project included raising the ceiling and we knew we would have a colossal mess pulling down the old drop ceiling. To minimize the disorder I corraled the attic insulation that sits above the kitchen by packing it into giant hefty bags and then storing them in another part of the attic. That took about 8 or 9 hours of work in the attic using a giant BBQ tongs to grab gobs of cellulose, stuff it into a bag, and drag the full bag over the living room portion of the attic. In areas of the attic roomy enough to stand up I just shoveled the insulation out of the way. When the target area was all clear I used a shop vac to suck up the remainder of the fibers—we didn’t want to be breathing that stuff in our house.

After the remodel we scattered the insulation back into its proper place but over 25 years it had compacted and lost much of its effectiveness. So, two weeks ago we blew in enough new insulation to create an R-38 effect, far superior to the original R-19. We like to save $$ by doing work ourselves so Craig checked out that possibility for beefing up the attic R-factor. We could do the entire thing for $475: $400 for the pink stuff and blower machine (free use w/ purchase of insulation), $20 to rent a Home Depot van to transport the stuff in one trip, and $55 to a friend for installing vent panels in the attic first.

This project was a blast! Craig did the attic duty and Daniel and I kept the machine full. Here’s how it works. The machine is about the size of a small refrigerator with a very long hose that goes up into the attic. The huge bales of pink insulation are wrapped in tight pink-panther plastic, and with a ripper we cut each one in half. We took the half-bale and pushed it into the machine, cut side first, plastic still on. A blade of sorts mounted on the machine cuts the plastic off and we yanked that back out. The insulation instantly expands to 16 times its volume. A beater separates and fluffs it up, then it flies up the hose and all Craig had to do was aim. The actual blowing part of the job took only 2 hours.

Bonus: Energy Trust of Oregon is rebating 25 cents per square foot of ceiling which amounts to $325. That leaves a $150 cost out of our wallet. But we’re very conservative with our utility use, never turning on heat until Nov. 1, which just passed. However, 5 days into November we still haven’t turned on the heat. It has gotten down as low as 62 in the house, which isn’t bad considering we had two nights this week of 35 degree temps. Could it be the new insulation that’s keeping the house livable? If it's that effective then with what we save on our heat bill, we’ll pay for the rest of the insulation job in just one winter!
Posted by Suzanne Bubnash at 6:00 AM