Childhood Used to Be Dangerous (But More Fun) 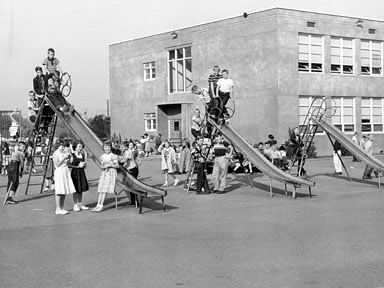 On Bridget's blog is a video of Magda going down a slide. She scooted her little self forward on the dull plastic ramp until she was able to glide a few feet to the bottom. At that point the slide levels out so that she didn't go flying off into oblivion. Perfect for a 15-month-old.

Unfortunately, slides and other equipment made for kids now days is across-the-board dull. Slides that don't slide, monkey bars too close to the ground, and I rarely see teeter-totters (see-saws) or merry-go-rounds anymore. Kids are safer but they sure miss out on fun.

Teeter-totters were the best. It was a balancing act to get onto them--someone had to hold your seat in mid-air when you climbed on but once you had a roughly equal weight on the other end, how fun it was to push up to the sky, then feel your stomach flop as you hit the ground. On the negative side, a careless or hateful partner on the other end could leap off unexpectedly, slamming you to the ground with enough force to knock your breath out. But that rare misery was worth it for the excitement.

Slides were great. They were made of metal and could be sky-high. Metal slides zoomed you down at top speed and sent you flying off the end onto the asphalt or dirt. On a burning summer day you could increase the thrill of the ride by using a sheet of Mom's wax paper to polish the slide. Then you hurtled down at freeway speed  and shot off the edge, getting scorched by hot metal all the way down.

A favorite childhood experience was when a neighborhood mom took a group of kids over to a nearby empty hill, with cardboard boxes, and let us hop in and slide down willy-nilly. I guess sometimes we got overturned and ended up with a mouthful of dirt.

I don't doubt that kids got hurt on toys before safety measures were in place. My brother slashed his chest on a rideable fire engine with sharp metal edges. A friend broke her arm when she fell off a skate board in the day when the wheels were inadequately small.  Probably worse than that happened  to kids. But we survived the fun, eventually healed and learned to be tough.
Posted by Suzanne Bubnash at 10:54 AM