She Never Forgot a Face 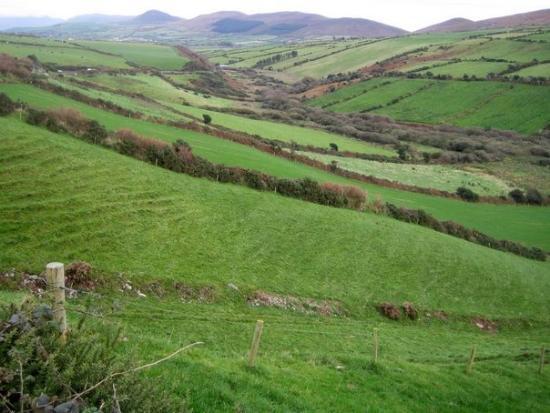 land near Kinard east of Dingle

On our first visit to Ireland in 1976 we were poor college students. We took a Friday train from Dublin to Dingle, the home of most of my Irish ancestors, and spent three days coming to know the town, visiting with the parish clerk, and looking up relatives in the parish books. My only living native Irish relative--Katie Brosnahan Griffin--lived in Massachusetts, and told me before our trip that all our family was gone from Ireland, or had died. So I didn’t go knocking on doors, and with no transportation, didn’t get out into the countryside at all.

In 1990 we returned to Dingle Parish, this time with more knowledge, and a vehicle. My first stop was to visit the same parish clerk. He asked if I had yet visited my cousin Peggy Flahive who runs Flahive Pub down on the Quay. “Who is she?” I asked. He looked incredulous that I hadn’t heard of my own cousin. Off I went to the pub and found that Peggy was a distant cousin on my Ashe side.   She had written down some of our genealogy years before, details that an elderly Ashe relative used to spout off when he was comfortably primed with grog.

Then Peggy asked if I had been to see my cousin Mary Ashe Griffin out at Kinard. No, I had never heard of her either. She gave me directions and off I went. Kinard is the historical domicile of the Ashe clan. My 5th great-grandfather once owned it all until the English stole it fair and square. He repaid them by running a smuggling business right under their noses. I followed Peggy's directions to Kinard, a few miles out into the country and knocked at Mary Griffin’s, one of three houses there. We talked awhile, I met her son, then I asked her a silly question. “My cousin Katie remembers the Ashe family—James, Greg, and Frank—living together in the old family house at Kinard. Where was the house located?” She looked at me dumbfounded and said, “This is the house.”  I was sitting in  my great-great grandfather's small house with its three-foot thick whitewashed walls.  Mary explained that a hundred years before, when the house was very full of Ashes, straws were drawn to determine who had to find a new place to live.  The family that drew the short straw--John Ashe and Catherine Prendiville and their 14 children--sent some children to Australia, the rest to the US.  A descendant of this clan is the actor, Gregory Peck.

Mary Griffin asked if I had visited my cousin Hannah Farrell out at Ardamore. I had never heard of her (surprise). Mary gave me directions to the Farrell’s dairy farm. Once at the property I drove past an old rock shed, a barn, and then up to the house. Hannah answered the door. I told her my name and that I was a relative from America. She warmly invited me in and began to talk, and then briefly whispered something to her daughter Anne. Anne disappeared into the cellar, then returned carrying a large box. Hannah never paused in the conversation and simultaneously fished through the box, whose contents I couldn’t see. After a couple of minutes she handed me something from the box. It was an old black and white photo. The photo was of a group of children posing with a very old woman. And, drum-roll please—the two-year-old girl in the photo was me! What the heck? I had seen this photo in my mom’s collection, taken in 1957 at 27 Taylor St. in Holyoke, Mass. It was probably sent to Hannah Farrell by her Aunt Katie who was present that day at 27 Taylor. I remember the day the picture was taken because I had fallen down the wooden staircase, and the old ladies had given me some chocolate to get me to quit wailing.

Craig’s comment about my visit with Hannah was, “Imagine making a visit to a foreign country--a remote area in that country--to a farm way off the beaten track--to visit a person you had never heard of until a half hour before, and not only do they know right off where you fit in, but they pull out a photograph of you!" 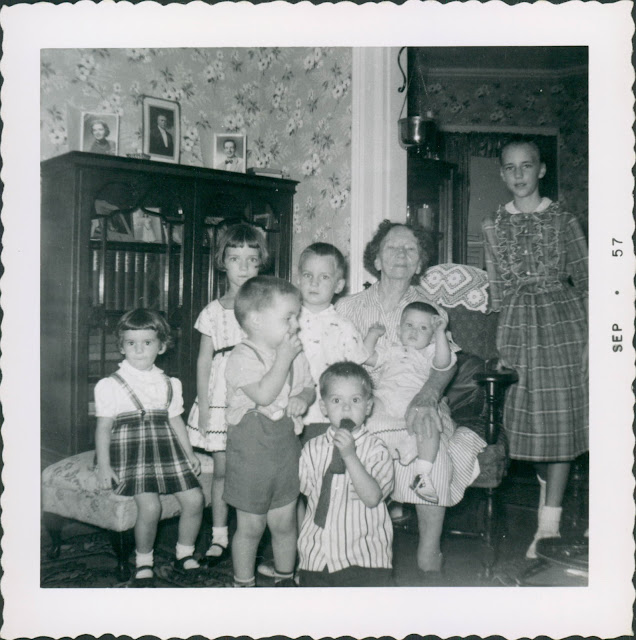 This is the photo that Hannah Farrell showed me.  That's me in the plaid skirt on the left; the other children are 3rd cousins of mine and the elderly woman is Katie Doyle Sullivan, my great-grandma's younger sister.  She is holding my brother. My cousin standing on the right, Mary Sullivan, was killed in a car accident two years later.
Posted by Suzanne Bubnash at 7:30 AM