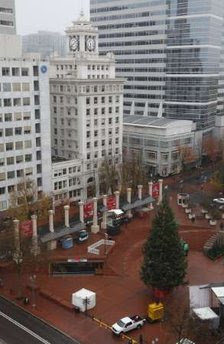 When I saw the photo of the Somali fellow arrested Friday night for attempting to blow up downtown PDX, it occurred to me that he might be from around here, because we have a large Somali community. And sure enough, he is a graduate of our very own Westview High School. 4 of our 5 kids have graduated from WV. Steven knows him from some common classes. Kristi says, " . . .I have known him since the 7th grade when he moved to America. I got to know him in my social studies class when we were learning about Islam. He was the only Muslim in the class and he talked a lot of his culture. It is so weird to think that he turned into what he is now. I cannot understand why anybody would want to hurt so many innocent people."

I sincerely hope this does not make our local Somalis targets of the idiots who would blame them by association. They appear to be law-abiding people and can't help that they had to flee the horror in their own country. I see the tall, willowy graceful Somali women around town. They make a lovely scene as they practically glide rather than walk, robed in stunning, vivid draping fabrics.

This guy doesn't appear to have been the sharpest tool in the shed though. He bought into an elaborate FBI ruse so he cooked his own goose, as they say. If convicted he'll probably get life. What a waste. He could have lived out his life here in the wonderful comfortable USA.  As it is, life in prison here is in some ways better than life outside of prison in Somalia. 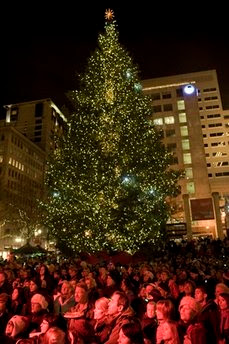 The tree was happily (and safely) lit Friday night
Posted by Suzanne Bubnash at 7:00 AM