The largest city in far Eastern Slovakia, Humenne is cradled in a valley created by the confluence of the Cirocha and Laborec Rivers.  To the south Vihorlat, an extinct volcano and the highest peak in the eastern Carpathian Mountains, towers over the valley.  My Grandfather was born about 2/3 up the north slope of Vihorlat.  The Ukrainian border is 23 miles to the east, Poland 20 miles to the north. 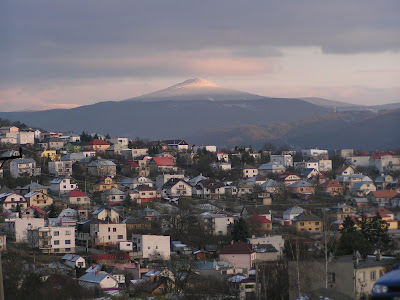 Humenne with Vihorlat to the south (photo by Jan Kocak)
Humenne has been a town for over 700 years and was a small settlement before that.  For centuries it was the center of a vast feudal kingdom ruled by the Drugeths, then later by the Rakoczi and Andrassy families.  The manor house, or castle, built in the early 1600s still stands and is used now for offices and a museum.  My ancestors were serfs bound to the Humenne Estate until about 1850, but even later some were employed at the manor house.  Some of their surnames were Barna, Szorokacs, Bubnas, Kassai, Mihaly, Vadszita.  During most of its history Humenne was part of the Hungarian Empire yet much of its population was Slovak or Ruthenian with thousands of Jews and even some Romani. 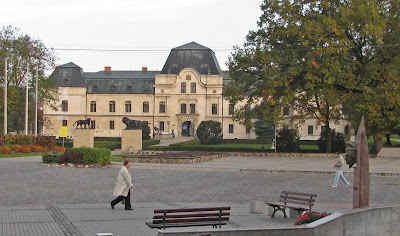 Drugeth Castle, Humenne
Ruins of medieval castles are found in every direction fanning out from Humenne.  Some of these were already old and past their usefulness by the mid-1600s.  Revolts against the Austrian Hapsburgs took their toll on the castles. 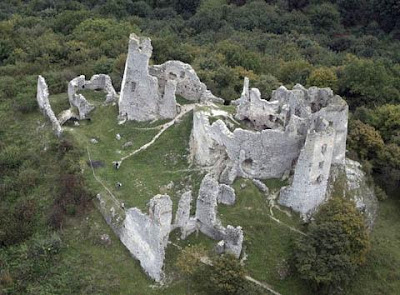 Brekov Castle (Wikipedia's photo here is way better than mine)
The town has seen local conflicts and destructive fighting from both World Wars.  On 21 Aug 1968 when Warsaw Pact nations invaded Slovakia, Humenne residents woke up to a shocking sight: Russian tanks were situated on high points around the city, guns pointing toward homes and businesses.  It was a time of fear and terror for people who already had seen much of that. 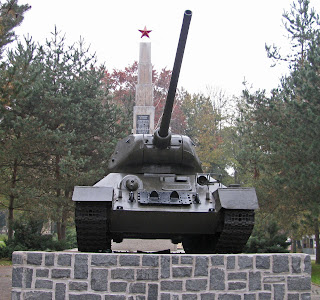 memorial near Snina
The first couple of times we visited Humenne (1997, 2002) it still felt like a backwater town that had not reached its potential.   An unfortunate building boom during the Soviet era filled the region with ugly concrete slab apartment towers. Happily though, in 2010 Humenne is a thriving city.  The central core of the city is full of new shops and businesses, a few hotels, and a very nice pedestrian park with fountains and a stage for musical performances. Optimism and prosperity permeate the air.  Even at 8 in the morning the pedestrian area was busy.  Further south more pedestrian areas are appearing making access to commercial areas more pleasant. 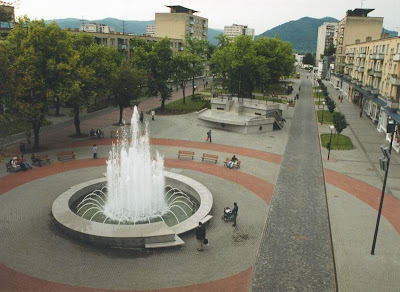 Looking south along the pedestrian mall. 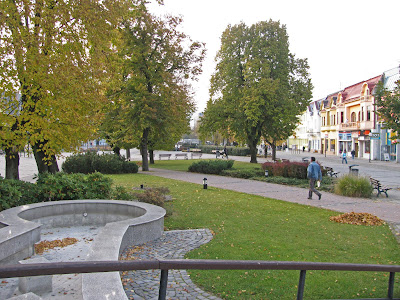 Humenne core 2010 (fountain emptied for winter)
Tomorrow: my Humenne family!
Posted by Suzanne Bubnash at 6:00 AM