The Missing Shoes at the Danube

On November 4th my daily blog post was about the Jews of Budapest, specifically their tragic experience during WW2. At the end of that post is displayed a photograph of a Holocaust memorial found on the bank of the Danube River.  Rather than a statue or pillar-type remembrance, the memorial consists of a long line of bronze shoes scattered along the lip of the river wall.  Old-fashioned shoes. World War 2 era Hungarian-style shoes. Jewish shoes. 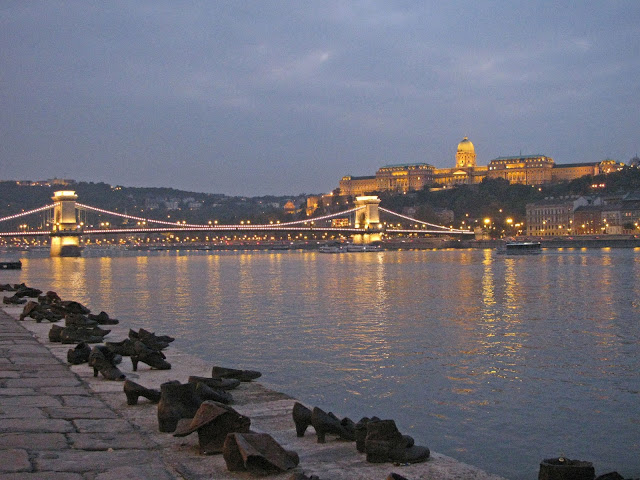 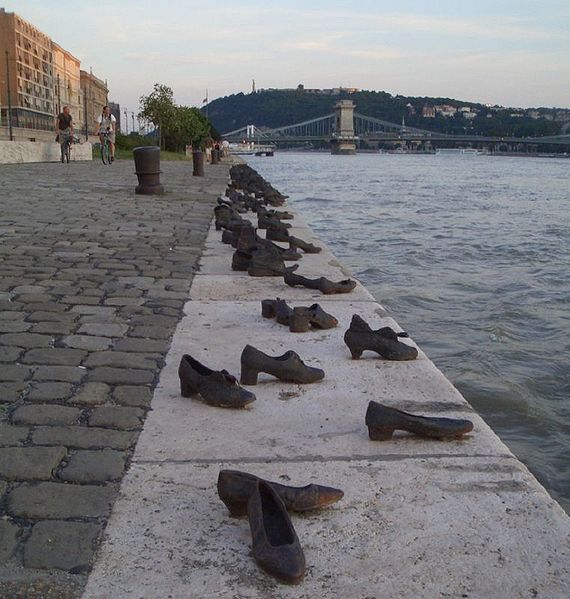 A week after arriving home from Europe I saw an announcement in our newspaper that a lecture was to be given by Holocaust survivors and former Budapest residents, Eva and Les Aigner. I don't believe in coincidences. Last Wednesday a friend and I attended the lecture.

I introduced myself to Eva, mentioning that I had recently been in Budapest at the synagogue and the riverfront memorial. She said she had escaped the slaughter at the Danube through a miracle in Dec. 1944. Here is the story:

Eva's mother was taken from the Budapest ghetto to a transport headed for a death camp. As the train slowed near the camp she leaped out and made a run for it but was pursued by a German soldier. She fell onto his boots and begged for her life so she could return to her two daughters. He said he couldn't let her go because he would be shot. Then he momentarily turned his back and she ran. It took her a week to get back to the ghetto.

Her two daughters were not there, and she heard about the executions taking place at the Danube. In the chaos at the river she found her daughters by their crying voices. The girls had been listening for hours to the never-ceasing machine guns killing their friends and neighbors. Their mother removed her wedding ring and offered it to a German soldier in exchange for her daughters. He took it and the three escaped back into the ghetto. The following month the Russians arrived, unlocked the ghetto gates, and told the residents they were free to go.

I'll never forget the shoes on the bank of the Danube and that there were at least two young girls who survived that terrible purge. I have met one of them.
Posted by Suzanne Bubnash at 6:00 AM