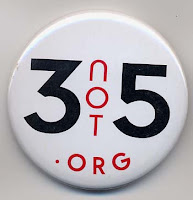 I prefer to be on the sidelines rather than in the middle of a crusade.   Yet if everyone sat out this game we would lose homes and the county would gift us with a 5-lane highway.  So began about 16 months of intense work within the community and county.

Briefly, the county plan was to build a full-width (98 feet) 5-lane Bethany Blvd. through our 9-neighborhood area with a design-speed of 45 mph.  Without sound walls.  Without landscaping.  Sidewalks kissing the road.  Without a stoplight along the way.  Houses would be torn out.  3not5 asked for a 3-lane road more in character with the neighborhood, one that would fit within the narrowest point of the existing roadway (68 feet).  Keep in mind that no one wanted the road to stay "as is."   We all wanted a new road that looked exactly like this: 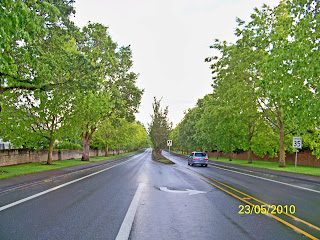 The 3not5 steering committee whittled down to 12 of us who worked extremely well together.  Just about every talent needed was covered between us: a printer with his own press, computer nerds, a graphic designer, a carpenter, an Intel manager who served as chairperson, researchers, a journalist, a retired traffic engineer, the president of a local retirement community, gifted speakers, a fundraiser.  We established a web page, passed out notices, circulated petitions, marshaled the press, made scads of phone calls, sent thousands of emails, created displays, researched local laws and ordinances and the value of trees, solicited contributions, testified before the county Board of Commissioners, organized neighborhood meetings, wrote letters, canvassed door to door, joined local advocacy groups, and spent oodles of hours strategizing.

In yesterday's post I mentioned that for over 20 years the county put off questions and concerns about Bethany's safety and future, telling us it was too early to express opinions or discuss improvements.  At the first public meeting (March 2010), over 400 people turned out (thanks to 3not5's hard work), which is about 395 more than usually turn out when county road projects are unveiled.   The meeting was staffed by planners, engineers, county reps, one Board of Commissioners member.  I knew we were in for a long-term battle when several of the staff repeatedly answered citizen concerns by asking, "Where were you in 1988?"   You see, the 5-lane plan was officially adopted back in 1988, and as far as the county was concerned, we should have spoken up then, and it was just too dang late to change the plan now.  No matter that every citizen inquiry and concern over the decades was rejected because the issue was 'not yet on the table.'  We were trapped in the Twilight Zone.

That phrase, "Where were you in 1988??" kept our committee laughing through the difficult depressing times when we were buried over our heads in our effort to keep up the fight for a 3-lane Bethany.