One hundred years ago today, December 1, 1911, my Baba (grandmother), Zsuzsanna Csornej-Maczko, boarded the S.S. President Lincoln in Hamburg Germany to sail for America.  Her journey to the US began about a week earlier when she departed on a horse-drawn wagon from her native village of Nemetvagas in then Austria-Hungary, bound for the nearest train station (likely Nagy Mihaly).  She traveled with sister-in-law Mary Szemjan, and a cousin, Mary Szorokacs.  Baba was an orphan who looked ahead to a better life in America.

Baba was 15, though the ship manifest says she was 17.  She added the 2 years for fear of being sent home by officials who frowned on very young women traveling without male company.  The voyage took 2 weeks, a little long for steamships at that time.  Ice at sea could have caused a delay.  There wasn't enough food in steerage so Baba took potatoes from the kitchen, the only time in her life she ever stole. 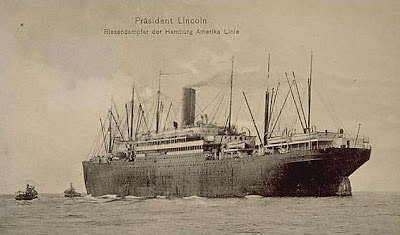 In addition to the 1500 passengers in 1st-2nd-3rd class, the President Lincoln carried 2400 in steerage

The three women listed on the ship manifest

The 3 women landed at Ellis Island, each with $17 in her pocket.   The manifest shows Baba as 5' 3", fair complexion, light hair, blue eyes.  All passed the health inspection.

Baba and her companions boarded a train for Pittsburgh, where they were to be picked up by Mary's brother, Mike Szemjan.  Only Mike was not at the station.  The girls spoke not a word of English yet managed to hire a wagon and driver for $5, to take them to Mike's house.  They spent quite a while knocking on doors in the Oakland area of Pittsburgh before they found it.  A few days later Baba's brother, Michael Csornej-Maczko, arrived from Snowden PA to bring her to his home.  She found work in nearby Clairton.

And 7 months later Baba's brother Michael arranged for her to marry Janos Bubnas, on 20 Jul 1912.  She had just turned 16 and he was 20.  It was an economic necessity for her brother to shed himself of the extra mouth to feed.  Baba was unhappy about the marriage at her young age (in the old country she would have been 18-20 in an arranged marriage).

They went on to a difficult life and eventually had 8 children.  Grandpa worked in the coal mines while Baba ran the farm and family.  They buried a child, sent 4 boys off to war, struggled through times of mine strikes and slumps in demand for coal, and then Baba became Grandpa's constant caregiver after he was crushed and paralyzed in a mine accident in 1951.

I'm deeply appreciative of the courage and resilience of both my Grandparents.  I deeply admire them for prevailing over copious disadvantages and working through complex hardships.  They gave their children and in turn their grandchildren, a wonderful life.  Grandpa died in 1966 of cancer; Baba died in 1996 at age 100.
Posted by Suzanne Bubnash at 9:30 AM