Yesterday I came across the rural Wilford Idaho cemetery while driving through the countryside.   And I saw this stone: 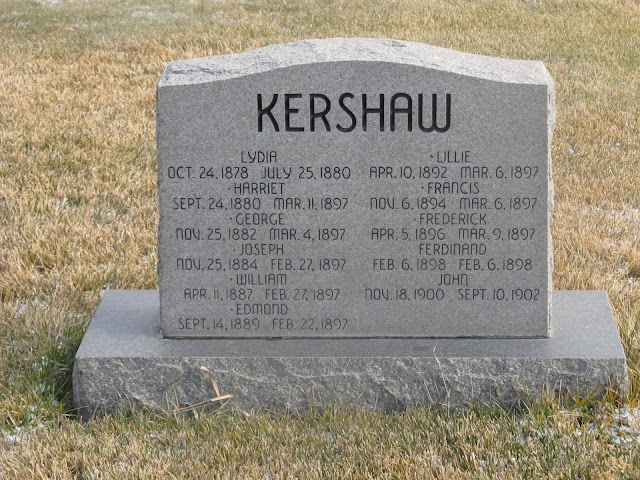 In 40 years of doing historical and family research, I have never run across such a record of tragedy.   Thanks to internet resources, here are the important details I found about this family:

The father, Joseph Hyrum Kershaw was born in what is now South Africa. His family joined the LDS Church and migrated to Utah. There he met Julia Clift, a Utah native; they married in 1877. Their first child, Lydia, was born and died in Utah. After living in various parts of Utah the Kershaws moved to Twin Groves Idaho about 1889.

Diphtheria hit the area in the winter of 1897. It's a dreadful childhood disease. In addition to extreme illness, the child is suffocated by a thick membrane that grows across the airway. My Grandma lost a child this way and once described his suffering to me. Horrible.

Over a two-week period the Kershaws buried all eight of their living children. The oldest was last to die, and had probably helped care for the others as they slipped away, one by one. In the dead of winter all were laid in the frosty soil of Wilford Cemetery.

The devastated, now-childless parents went to Utah to stay with family for a while. When they returned their house had been burned down by neighbors to prevent the spread of the disease.

Five more children were born to Julia and Joseph. Two of those died as infants, and the youngest child died at age 26. All told, this couple buried 12 of their 14 children. Their only two surviving children lived until the 1980s. Mother Julia lived until 1929 and father Joseph until 1941. Julia and Joseph were members of The Church of Jesus Christ of Latter-day Saints. Their knowledge of eternal family ties was a beacon of light in the midst of their acute pain and sorrow.


Posted by Suzanne Bubnash at 7:00 AM