Today's post is about a man I never met, and it is written in honor of our veterans, on Veteran's Day.  The source of my information is The Idaho Examiner newspaper, 3 Nov 1945.  I believe that was the Pocatello newspaper in those days.

Lt. Fred Siler is the man.  He was Craig's uncle.  On his return from over 3 years in Japanese prison camps, Fred gave an interview to the Examiner detailing the experiences he could bear to talk about. He had survived the 1942 notorious Bataan Death March and called it "a picnic" compared to what he later endured. 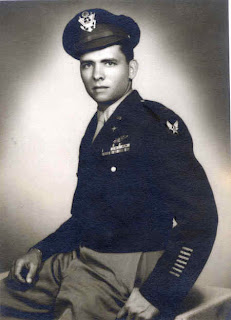 In late 1944 the Japanese decided to transfer the POWs then being held in Manila, Philippines, to Korea.  It was 45 days of hell, and only 310 of the prisoners survived out of the 1600 who began the journey.  They were put aboard a ship and this is how Fred described conditions:

"The forward hold was jammed with 640 men.  We were packed in so that we couldn’t sit down.  After the first day we had no food or water.  The second night 40 men died of suffocation.  There was not a breath of air.  The only latrines were a few buckets.  We were so crowded most of the men couldn’t get to them.

"The second day out the ship was blasted by U. S. Navy divebombers.  We were bombed, beached, burned and sunk at Subic Bay on Lingayen Gulf.  The last bomb to hit the ship before it was abandoned blew a three-inch anti-aircraft gun into the center hold where 800 men were packed.  Many were killed and many others mangled.  The ones who tried to get out were machine-gunned.

"We were left with no life rafts or boats.  The ship was burning but we weren’t allowed to leave until next morning.  The Japs set up parallel lanes of machine-gun fire at each end of the ship.  We had to swim the 600 yards to shore between them."

The survivors were put aboard a freighter which had been used to haul horses for the cavalry.  The horse stalls had not been cleaned.  The men escaped the bitter cold by covering themselves with the manure.

"We didn’t mind the smell.  More than two-thirds of the men were suffering from dysentery and smelled worse themselves."

After transfer to a third ship it too was bombed and scores were killed and wounded.   There was no water and the Japanese did not allow the men to aid the wounded.

“The stronger men were detailed to throw the dead overboard.  We were so weak it often took four of us to lift the withered bodies over the rail.  We never knew who would be next.  Some sick and wounded lingered for two or three days.  Others died suddenly.  One day another of the healthy men helped me drop bodies overboard.  The next day I helped throw his body over the side.”

“One of the surest ways to come out of prison alive is to have a real true friend.  You know that as long as he makes it, you will make it, and if you get through, he will.  Lt. Bill Akin of Lubbock, Tex., was my closest friend.  We entered the army together in 1941, took flight training, were commissioned, volunteered for the Philippines, fought the Nips side by side and were captured together.  We even had a mid-air plane collision shortly before the war but parachuted safely.  We were never separated until we reached the States a few days ago.”

He remained in the army after the war was over:

“I’m going to stay in.  The army has a lot of planes I’ve never had a chance to fly.”

On this Veteran's Day, 11/11/11, remember Lt. Fred Siler and thousands courageous men and women like him, who are and were willing to serve.

Posted by Suzanne Bubnash at 5:28 PM