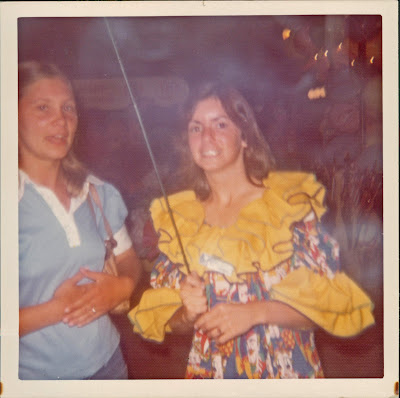 That's me on the right, in the clown costume. And my co-clown Michelle on the left, after her work shift ended. The two of us ran the balloon stand at Magic Mountain in Valencia California in 1974.  We had a blast and worked long hard hours.

What is now the city of Santa Clarita was a collection of small towns then, and work was hard to come by. There were few large businesses, no shopping malls, few restaurants, no hospitals. Lots of farmland and ranches and very small family-owned businesses didn't provide many jobs. When Magic Mountain opened in 1971 it was such a boon to employment in the area and it seemed just about every 18-year-old I knew marched down and hired on.  I started in 1972 just after my 18th birthday and worked there for one year straight and then during college breaks during the next year.

My first assignment was in the gift shop called Holiday Bazaar. Gift shops selling useless trinkets was not my thing, and before long I was begging to work outdoors at the balloon stand. I loved it out there, even when the weather was wickedly windy and cold, or baking hot. How fun it was to blow up a thousand balloons on a jam-packed Saturday night and sell them to cheery children on their way out of the park. We also sold worthless hand-made paper flowers, but even those brought out smiles from the kids. 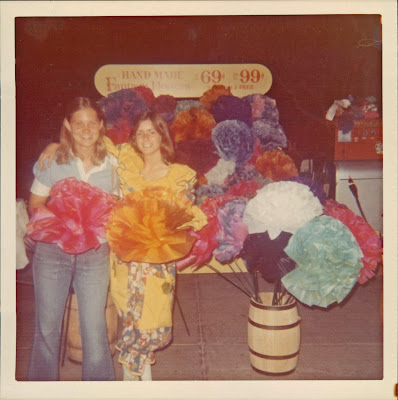 On crowded summer days I worked as much as 15 hours at a stretch, six days a week, and seven days in a staffing emergency. What a blessing to have so many hours. I was paying my own way through college (tuition, room/board, books, 100%).

The park closed at midnight, at which  time security would begin to "sweep" guests toward the exit. Balloons was near the front of the park, and it could be 1 a.m. before all the guests were gone, so we were the last employees out. By the time we clowns counted the money, cleaned up and re-stocked for the following day, turned in our cash, changed our clothes and headed home, it could be nearly 2 a.m. Work started again at 10 a.m. the next morning. To keep my sanity I often went on a half-hour bike ride before heading to work for the day.

Such great memories I have of Magic Mountain. More another day.
Posted by Suzanne Bubnash at 7:00 AM