Craig and I met the night before our sophomore years began in the fall of 1973 at a church social event.  The next evening Craig and some other guys came over to my all-female apartment building to talk and play guitars.  He was noticeably more mature than most of the guys around, and for obvious reasons: he was 21 and had just returned from 2 years of missionary work in Germany.  We spent most of the next year dating before becoming engaged.

BYU was a blast for dating couples like us.  We could enjoy the mountains, lake and rivers, the changing seasons made for a variety of activities, the campus theater showed recent films for 50 cents, and you could see older films or foreign language films for free.  The rec center in the basement of the Wilk was where we went bowling for cheap.  We almost never ate out due to the restrictions of a student budget (students now manage to afford it and I wonder how).

Craig had the use of his family's old metallic-blue Chevy station-wagon (which we christened "the Chuck-wagon) (I should do a post on that old car).  But gas was not too affordable--again, the restrictions of that pesky student budget.   We were content to have fun within the general confines of campus though.

See a few photos from those simpler days: 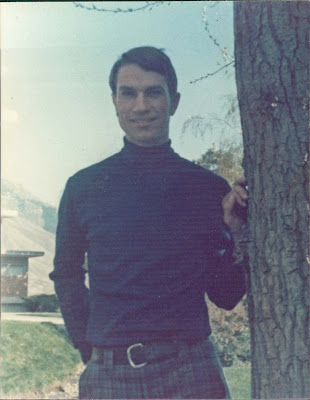 Handsome dude!  Plaid pants and turtlenecks were 'the thing' in 1973 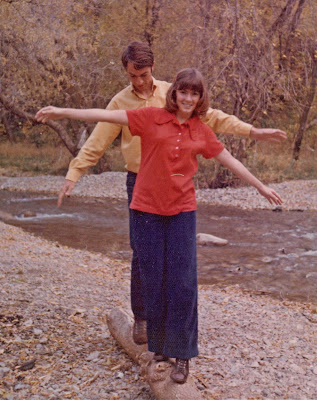 On a picnic up Provo Canyon, September 1973 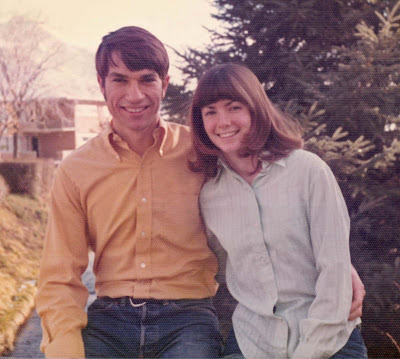 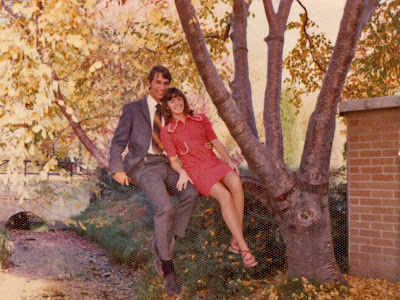 Why did we think this was a clever photo?
On my last visit here I looked for this spot; the tree is gone and the canal is covered over
Posted by Suzanne Bubnash at 7:00 AM