5 years ago my friend ML organized our first annual women's backpacking trip, which has come to be called SOBAD--Sisters Of Backpacking Active Divas.  I'm not sure on the 'A' word.

SOBAD has a core of 4 of us who head out every year the Thursday after Labor Day, for 3 days.  Others join in now and again.  We bring our own breakfasts and lunches, then take turns doing dinners for the group.  We have a purification system for water, and we're prepared for every variety of weather.  At night we tell stories and sing silly ditties around the campfire.  ML packs a small handgun for emergencies that may or may not involve bear, cougar or humans.

Inaugural Year, 2008--We hiked the Eagle Creek Trail, the premier hiking trail in the Columbia River Gorge.  It's 13 miles to the top at Whatum Lake, with a 4000 foot climb.  The first half of the trail, up to 7 mile camp, is lined with amazing waterfalls: Metlako Punch Bowl, Loowit, CrissCross, Tunnel, etc..  You know how far you've come because of those landmarks.  The second half of the trail, from 7 mile camp to the top is the opposite.  It's much drier, the scenery is pretty much fir trees the whole way, so it's harder to know when you're almost there.  I carried 35 pounds that year and learned my lesson. 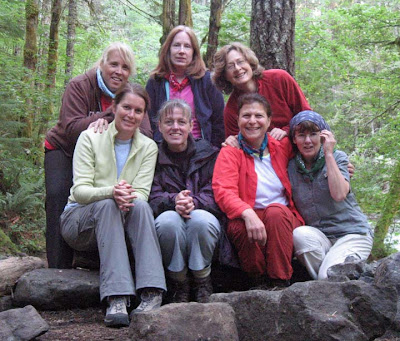 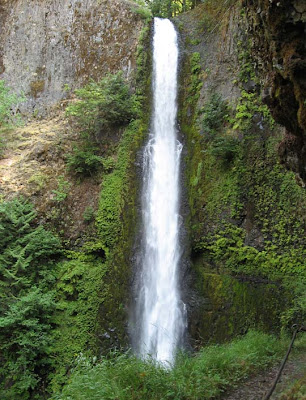 
2009--Goat Mountain, north of Mount St. Helens in Washington, about 20 miles total.   A very steep and scenic climb on the first day took us through meadows of bear grass, and stunning views of the collapsed north side of Mt. St. Helens.  The trail wound through the volcanic blast zone, then we would turn a corner and be in what we call "leprechaun land," verdant green and shady, untouched by volcanic trauma.  We camped by a small lake the first night, and by a creek the second.  On the third day I knew something was wrong with my right foot; every step was excruciating and I was afraid what that might indicate.  Turned out to be a stress fracture, so for the next month my foot was in a walking cast.  And I had surgery that November. 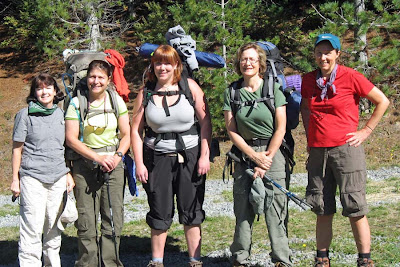 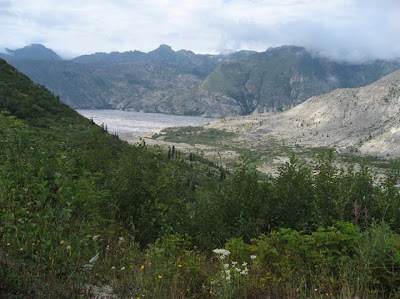 blast zone in the distance


2010--I missed this year due to having visitors at home.  Waaaa.  I hear one of the days was miserable due to a deluge.


2011--The Tanner Butte trail begins at Eagle Creek and heads west from that point.  Altitude gain on this trail is about 5800 feet.  Much of the trail winds through huckleberry heaven, which means bear country.  We passed a fresh deer kill being preyed upon by swooping turkey vultures, and walked like pants on fire to get away from there.  We did a lot of singing on the trail to discourage any bears who might be around.  Refreshing Dublin Lake was our first camp.  The second night we nooned at Big Cedar Spring, then camped at 8-mile camp.  To get there we had to step rock to rock across a wide rushing stream wearing our packs, which was a little dicey. 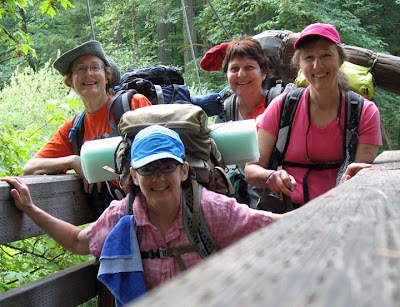 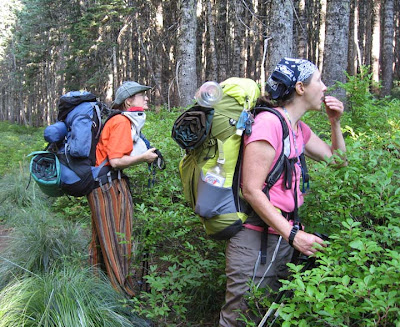 
2012--Big Slide Lake east of Estacada.  We let men join us for once.  Craig on the first day and Jeremy on the second.  This trip was different in that we did not move our camp.  Both nights were spent next to the lake.  On the second day we hiked up to a fire lookout on top of a scenic mountain.  The coolest thing about this trail was evidence of major geologic disruption.  There were enormous rock slides in several spots that we picked through.  The "big slide" couldn't have happened all that long ago as there were only small trees growing through it.  You need 10 billion rocks?  Come and get 'em. 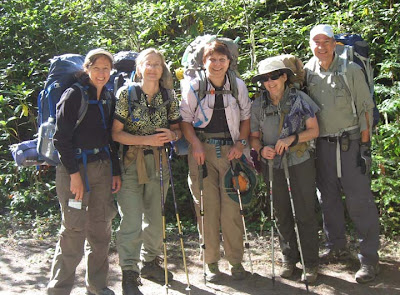 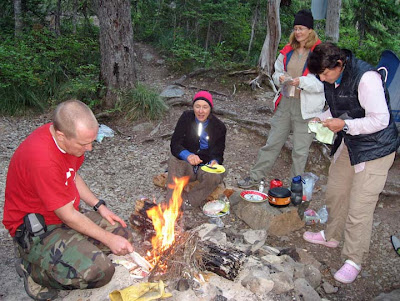 
2013-next year will be the mother of all backpack trips (for us old ladies).  We'll need an extra day--4 instead of 3--we're going to circumnavigate Mt. St. Helens, 29 miles . . . so much to look forward to!   Being out in the wild with my friends and family is one of my favorite activities!