How the Other Half Lived

After reading an article in BYU Magazine about successful female athletes, I thought how cool it is for them to know nothing of the struggle it was in the past to be female. I'm not talking about archaic arranged marriages and disenfranchisement. Those were major issues, and they had been overcome (in the US) long before I came along. Certain other injustices to females took a long time to disappear.

The first memory I have of the unfairness of being female, was in about second grade. Some boys were just jerks, and one who was constantly hazing me, slugged me in the stomach on the playground. After I recovered enough to walk, I marched straight to the duty teacher to complain.  Can you guess what she told me?  Slugging or hitting was a boy's way of showing he liked me.  Seriously, so I should be swooning?  That was not the only time I witnessed a boy getting a free ticket to assault someone.

A constant theme in my childhood was "act like a lady." If I climbed a tree, some adult was sure to say I should "act like a lady." Or if I went out to play street baseball w/ the boys, I heard the annoying refrain. I was interested in fun and adventure, not sitting around with my hands in my lap. 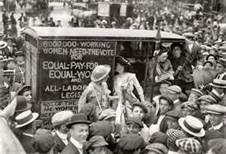 As my friends and I grew into cute pre-teens, then teenagers, we hated walking past work sites where Mexicans were laboring. Without exception, those men would all pause in their work, gawk, whistle, and say probably nasty things in Spanish. We avoided them where possible, which was hard in a town full of migrant laborers.

A serious issue in high school was the limited curriculum and opportunities for females. In 9th grade I approached my counselor to tell her I really, really wanted to register for Aviation Science that fall.  You can guess the chuckled response, yet it's shocking even for 1969: "oh honey, that class is for boys only." Good thing it happened to be full anyway, or Mom and I would have made a fuss. Shop classes were also limited to boys. I certainly did not begrudge learning sewing and cooking, but how useful it would have been to also learn about cars and wood and metal. And boys could have learned the important, useful skills of sewing and cooking.

I was never an athlete, so it didn't affect me personally that only boys were offered competitive sports. But it seemed unfair to me that girls had after-school groups that played each other, but only the boys got the big time attention and funding. Not anymore!

Here's a ridiculous anecdote: After my marriage I went to the DMV to renew my license. I wanted it to say Suzanne B. Walker; the letter B was for my maiden name which was now my middle name. The DMV clerk  said ok, but the letter B would have to be in quote marks, like this: "B".  What the?  No, I said, like this: B.  He insisted that a maiden name was more like a nickname--not your real name, so it would need quote marks. No way!  Of course I stood my ground, but I wonder if Mr. Insane-DMV-Man did that to every woman changing her name.

I'm very glad for my girls, grand-girls, and all other girls out there who can do whatever they are capable of doing, without being restricted because of their wonderful girl-hood.