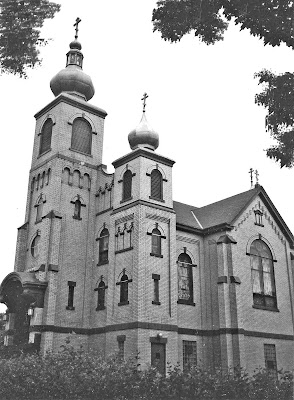 When we arrived at the historic colonial coal town of Perryopolis (estb. 1814), my cousins were playing ball in my grandparents' yard. I had not seen any of them in 5 years, too long ago for me to remember them, but Dad had prepped me with their names and ages. Cathy and Janet's home was on Long Island, New York, and both were close in age to me. Eddie lived a stone's throw away from my grandparents and was also my age. The remaining cousins were younger than me, except for Susan, who was five years older than any of the rest of us.

As kids do, I hit it off with my peer-cousins in the green open space of Perryopolis. Backyards had no fences, and runs flowed everywhere (creeks). The wide-open schoolyard was only a few hundred feet away. My Uncle Paul's service station and beer distribution business was within sight of my grandparents' house, and I used to go down there to stare at the gum he had for sale in the office, thinking if I hung around long enough he'd give me some.  Can't remember if he did or not.

On July 20 our family had the formal reunion celebrating my Grandparents' 50th anniversary, which I'll cover tomorrow. By that time I had warmed up to everyone in Perryopolis, I felt more comfortable, and my natural mischievousness broke through my deep, painful shyness. The trouble began.

First, I loved my cousin Janet's cutie haircut and had to have one like it. I pestered Mom endlessly about it until she finally took me uptown for my first pixie cut.

Then, as parents do, Dad wanted to give us a little taste of his childhood, so he took us into the woods to pick blackberries (they didn't grow in our part of California). Back at his parent's house, he announced we were going to give our berry haul to Aunt Dorothy so she could make one of her world famous blackberry pies. Heck if I was going to give up my hard-earned container of berries. Tiring of my whining and fussing my folks let me keep the berries, just to shut me up. They regretted it later.  I insisted taking the berries along to our trip to New York. They spilled on the car floor and onto some clothing and pillows, and you all know blackberries make a stain that never comes out. 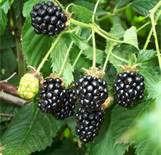 It gets worse. Uncle Ed went out on an errand for the beer business and invited my cousin Eddie and me to go along for the ride. We all three piled into the company beer truck. 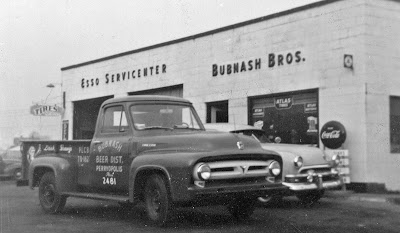 Uncle Ed stopped at a client's bar and left us kids in the truck. He was gone an awful long time. We got antsy until we discovered the cigarette lighter (remember those?--they were in every vehicle). It wasn't cool enough that the thing was hot and bright. We had to burn something, but what to burn?  The seat of the truck, that's what. We burned a few holes in it and were lucky we didn't incinerate ourselves. I caught major heck for that, and rightly so.

Eddie and I again. Not enough for us to do I guess. We got the amusing idea to tie my Uncle John and Aunt Kay inside their house. We found miles of cord in Eddie's cellar. Kay and John's house had a wrought iron railing outside the kitchen door that they used daily. With focused energy we wrapped the cord from the door to the railing and back again and again, a hundred times or more, building a spider's web that we were so sure would entertain and amuse them when they tried to leave. It didn't.  Caught heck again.

My relatives must have been thrilled to see our family leave and put 2700 miles between us and them! And I'm sure we were considered ill-mannered hillbillies for years after. Or least I was.

Posted by Suzanne Bubnash at 2:13 PM