A bunion is a debilitating and painful deformity in the foot, as seen above

At the end of January 2013 I had an elective bunion surgery on my left foot; the right one had been satisfactorily fixed just over 3 years previously, and it had taken me this long to store up the guts to do the other foot.  Surgery is always risky and I debated back and forth about the wisdom of doing it.   After all, I could walk and run and ride my bike the way my foot was.  The old adage, "if it ain't broke, don't fix it" came to mind.  But it was "broke."   I hike and x-c ski regularly, and I call it "broke" when I have to pad my foot with layer upon layer of foam and moleskin and duct tape every single time I set off on an adventure.  And still suffer unpleasant pain.

This operation was less painful and healed faster than the previous one.  The internal hardware had improved since my last surgery, according to Doc T, and the pin in my second toe was internal, rather than external.  The stitching was underneath the skin which was more pleasant and attractive.  I went off the pain medicine after just a few weeks this time.  Even though Doc T said to wait 6 weeks before putting weight on the foot, I began at about the 4 week point putting my foot on the floor to get it used to a little bit of weight.  It was exciting to anticipate a return to normal fairly quickly.

I should mention the scooter here.  After my first bunion surgery I was on crutches for 11 weeks; what an uncomfortable dangerous time (I fell twice).  This time we rented a knee-scooter and what a joyous life-saver that was.  I could get around fast and have a little fun while doing it!   Best of all it's much safer than crutches.

[NOTE: these first 4 photos are innocuous.  Below them is more text.   Then there will be a 4" blank area to  protect those who don't want to see an unpleasant photo.  That will follow after the space] 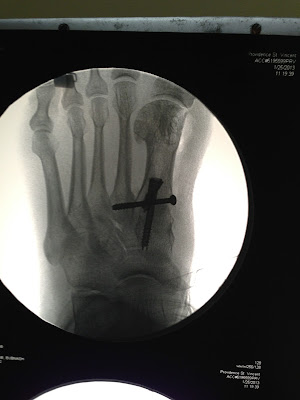 The hardware in my newly repaired foot 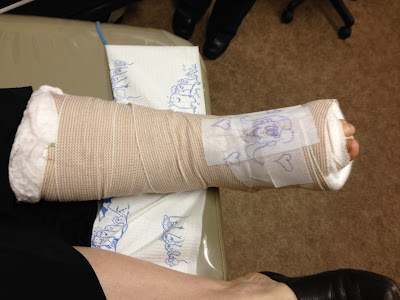 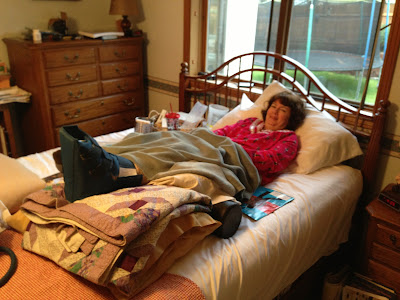 This is the life!  NOT 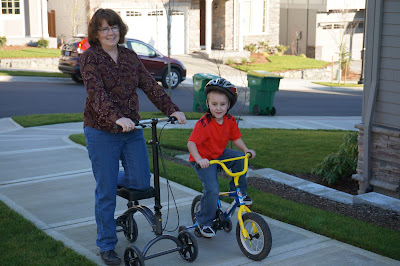 Me, my scooter, and Lil' Buddy, 3 weeks after surgery

On the down side, I got what the doc calls a fracture blister on my foot, which is basically a hematoma.  During my recovery that thing was always weepy and messy.  As my foot healed an ugly black scab formed on the top on both sides of the incision.  Doc T didn't seem worried about it.  Just over 6 weeks after the surgery we left town for a family reunion.   At my doc appointment the day before the trip he thought everything looked ok, though the surface healing was slow.  The bones had knit together as they should.

During our trip I kept my foot under wraps, because that black scab was very ugly.  And it began to smell off.  And then the incision seemed to be pulling apart, yes, my foot was unhealing.  Yikes.   I thought about going to the ER, but instead made an appointment w/ Doc T for the morning after our arrival home.

He took a look and alarmed the heck out of me when he said that I may need to see a plastic surgeon.  He carefully removed the black scab and we were all appalled to see the tissue beneath had deteriorated, and I was looking at the inside of my foot; the tendon was exposed.  A surgical-site infection had severely damaged the tissue in my foot. So by the time I left the office that day the plastic surgeon's office had been alerted and Doc T's notes had been faxed over.  I knew then I was facing a mammoth problem.  Even more so when the plastic surgeon's office got me right in that afternoon.   How often does that happen?  Surgery was scheduled for a few days hence, with a followup surgery 2 days after that; all in all the plastic surgeon expected me to be in hospital for 5 days.

My head was spinning.  And I was in shock.  And afraid.  I called my friend S for consolation; she was rationally optimistic which helped immensely.

Part 2 tomorrow: My Pound of Flesh 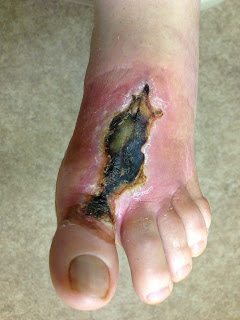 4 weeks after the surgery; the bones were healing well, the incision was not

Posted by Suzanne Bubnash at 7:38 PM