A Horrible Crime in My Childhood Neighborhood 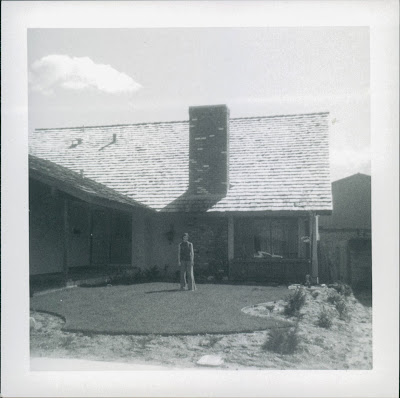 I don't make a habit of living in sketchy high-crime neighborhoods. Yet twice in my life I have lived just around the corner from a scene of triple-murder. Yeah. The first of them was random--that was mighty scary. The second was a family deliberately targeted, so we had no fear for our personal selves that day. Both times the murders occurred in orderly nice neighborhoods full of children and families and people who went to work every day.

I wrote about the second murder here, here, and here. And now the first:

This one occurred on November 29, 1972 during my freshman year of college when I attended nearby College of the Canyons in Valencia California. My family lived in a planned community with a variety of homes among parks, a shopping area, and a clubhouse with pool and tennis courts, all of which were within walking distance on paseos (very wide curvy sidewalks that were not cut by streets).

The day of the murder I finished my morning classes about 10:50 a.m. My friend Emily was riding with me in my Mom's forest green Dodge Dart sedan, which I had borrowed for the day. We drove down Rotella St. near our houses at 11:10. I vividly remember looking at the clock. After dropping Emily I went home to my empty house through the unlocked front door--we never locked our doors during daytime.

I hadn't been home but 5 or 10 minutes when my Mom called from her work at Sierra Vista Junior High out in Saugus. She was frantic, and instructed me to lock the doors and stay inside until I heard from her again. There had been a murder in the neighborhood and the suspect was at large. Yikes.

That morning Mrs. G, who lived on Rotella, had invited a neighbor's son to play with her 3-year-old son. She and the 2 boys were out on her driveway when a young black man--Robert Grigsby, age 17--pursued them into her house, grabbed a knife from Mrs. G's kitchen, chased the 3 into the back bedroom and slew them all. About that time Mrs. K, mother of the other boy, came down to find out why Mrs. G was not answering her phone, and walked in on the murder scene. Mrs. K was slashed at and Grigsby took off.

from my 1972 high school yearbook: he doesn't look like a murderer

The police were called and then the word swept to every corner of the valley. As mentioned above, I drove past Mrs. G's house on Rotella at 11:10, the exact time later determined that the murders occurred. I probably got home at 11:15, and by 11:25 my Mom was calling me from her work 8 miles away to tell me of the murders. The word of the crime spread that fast. Our area was still partly rural, not heavily populated, and it seemed we knew everyone else, or at least knew of them, so one phone call became 10, and 10 became a hundred, and so on.

My friend Emily also got a call from her Mom. Emily called me to say she was too afraid to stay home alone and wanted to run to my house. I implored her to stay home with the doors locked but she was willing to risk being out and about with a murderer on the loose, rather than be home alone. She made it over. I recall that by noon, less than an hour since the murder, Mom called to say the perp had been caught down by the river, a few blocks north of our house.

This guy was mentally ill and had exhibited alarming aggressive behavior previously. His brother was well-known at my high school, but I had not known this kid--perhaps he wasn't a regular attender. There's plenty of unanswered questions about that dreadful day, and virtually zero about it on the internet. I don't even know if he's still incarcerated but can hope that he never sees the light of day.

It has always creeped me out that our house was unlocked. If Grigsby had walked a few more blocks and seen me go into my house, he could have come in after me. Or he might have been waiting for me inside . . .