An East Coast Adventure, or My 2 Days As a Fugitive From the Law

For Craig's sabbatical in 1990 we planned a month-long vacation traveling a loop in the East, beginning and ending in South Carolina.  My children and I flew to Columbia SC to start our big adventure; Craig would join us later in New England.

We picked up a Budget rent-a-mini-van and headed north, stopping in Virginia for the night. It was there in Virginia that I noticed there were no license plates on the car. Not in front, not in back. Mmmm, they do things different here. I didn't worry much; if the rental company left the plates off their vehicle it must be ok, right? Not my problem . . .

We spent several days at my Baba's in Pennsylvania, then continued on around the northeast through six more states. I recall passing several Massachusetts state troopers who didn't seem to care about my vehicle sans plates. But in Vermont, they cared.  I hadn't been in the state 15 minutes before being pulled over in Brattleboro, the home of my Irish immigrant ancestors. In fact, I was pulled over just down the street from where my Sullivans and Toomeys used to live. 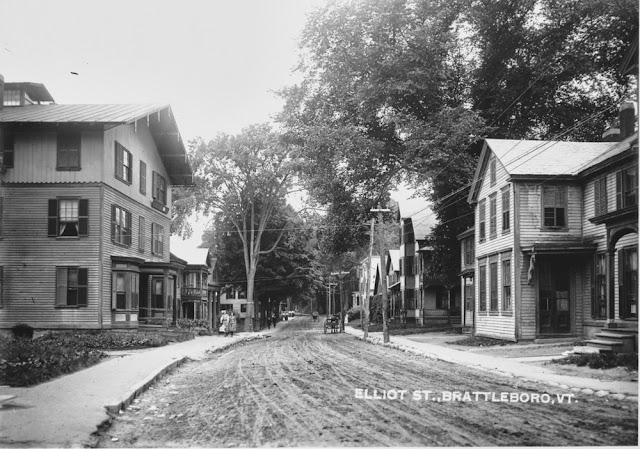 Elliot Street in Brattleboro; my gr-grandmother was born at the end of the street (out of view)

Ms. Policewoman brought to my attention the missing plates and asked for the registration.  Surprise!  Another Budget blooper--the glove compartment was empty. I offered her the only document I had: the rental agreement. It was against the law to drive without plates or registration, duh, and she could take the car from me right then, yikes. But she peeked inside the car, saw 4 wide-eyed children with all our junk, and said she wouldn't do that. The deal was, she would meet me at my hotel to write a citation (and I made sure it was going to be to the rental company), then I was not allowed to drive the car except to go to a Budget  rental-car location for a switch the next day.

The nearest Budget was in Greenfield Mass. an hour away, but I could visit my cousin Maureen in her Catholic convent in West Springfield on the same trip, so no harm done. Turned out the Greenfield office was closed that day, a Saturday. At Maureen's convent I spent a good 45 minutes on their phone attempting to find an nearby Budget office that was open. The closest one was down at Hartford/Springfield (BDL) airport in Connecticut. My research time in Vermont was going to be sucked up fixing this stupid rental car mess. But wait, I was going to pick up Craig at BDL in a couple of days anyway. My choice then, was to live as a fugitive from the law for the next few days, because I darn well wasn't going to squander my vacation making 2 trips down to BDL.

So back to Brattleboro we went. I cautiously stayed within the speed limit on back roads to get there. I parked in obscure spots hidden from the road. While I transcribed gravestones at the cemetery the car was secreted behind shrubs. Not a good feeling, to know I was disobeying a cop, especially one who gave me a break, but the whole thing was a dumb error on Budget's part, not mine.

2 days later at BDL I told Budget they could have their illegal vehicle back and replace it with an identical one at the same rate. And they could have the ticket too. They whined and fussed, but in the end gave me what I wanted, and the ordeal was over. My life as a fugitive from the law had ended, and all was well. This was not the last time I was to have a negative experience with a Budget rental car, and that will be a story for another day.