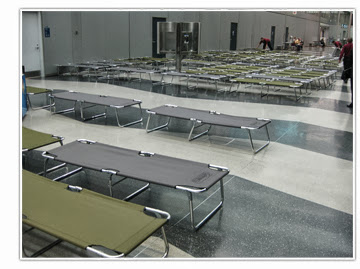 Did anyone out there know that O'Hare airport in Chicago routinely sponsors a giant sleepover in the basement of one of their terminals?  Neither did I. Until I was forced to join in one stormy summer night.

My son Steven and I were flying from PDX (Portland) to AMM (Amman Jordan) in the summer of 2007, with a 2-hour layover in Chicago. Summer t-storms are common enough around the country; I should have known better than to book a flight with a layover in Chicago, the home of snarly, delayed air traffic. But there we were, strapped into our seats on the PDX tarmac, going nowhere. "Weather near Chicago" caused air traffic to back up around the country. Our flight wasn't even allowed to take off until it was known it would have clearance to land in Chicago.

We were delayed over 1.5 hours, and finally our plane headed for O'Hare; I knew that making our connection would be like finding the Holy Grail. Once in O'Hare we dashed for the train that would take us several terminals away to our Amman-bound flight. My heart fell as we raced off the train only to see up ahead that the gate area was empty. We had missed our flight.

But wait, there was the plane out the window--it wasn't too late after all. The lone gate agent saw us coming and steeled herself for what she had to do. The plane's door was closed and she would not open it. Period. We pleaded and begged and she was ice cold. Others arrived breathless at the gate, only to be shut down also. And then our plane took off without us. Eventually there were over 15 of us who were told that we had 2 choices: we could be put on standby for tomorrow night's flight--there was only one flight per day to Amman. OR, we could pay $300 for a flight to Heathrow to become standby passengers on the Heathrow to Amman flight. Seriously, did they think we were idiots?

I was the first to say we'd take our chances in Chicago, and so Steven and I were put at the top of the list for the next night's flight. By now it was after midnight. And then, one of the employees casually mentioned that O'Hare had cots and pillows and blankets for stranded people in the basement of one of the terminals, but she wasn't sure which one. A few stranded passengers headed for $350 / night hotels, but we cheapo Walkers spent 40 minutes wandering and finally discovered the location of this massive sleepover, and when we did, we joined about a hundred other sleepers and a couple of armed guards, in a basement corner of O'Hare. The only thing missing was Netflix and popcorn. 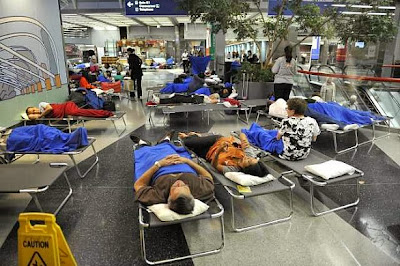 We were shooed out about 5 a.m. and were allowed to take our blanket and pillow anywhere we could find a quiet corner. Later on we took the El into Chicago, ate a breakfast roll reclining on some adirondack chairs on the front lawn of Sears Tower, explored the theatre district, ate a late lunch at Hard Rock Cafe, and then did some digging at the Newberry Library. And then it was back to O'Hare to make sure we were first in the standby line.

We made it on that night's flight and that was when I realized the truth about the previous  night. Because we were so late getting to O'Hare, our seats had been given away to standby passengers. And this night, we were taking seats from passengers who would soon be arriving begging to make their flight. I wonder if the numbers ever catch up. Are there desperate late-arrivers every night of the year? And nightly standby passengers to fill the seats of the seriously delayed? Who knows?
Posted by Suzanne Bubnash at 4:00 AM