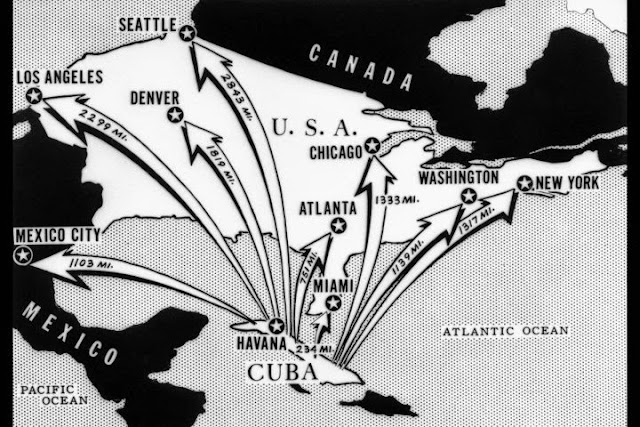 In October 1962 a staggering, distressing international event occurred. The Soviet Union, under Premier Nikita Khrushchev, set up missiles in Cuba that were directed toward the US. The Cold War was hot. And hot could get hotter, sizzling enough to burn large swaths of America right off the map with nuclear weapons. The Cuban Missile Crisis was scarier to me than the boogie-man and the witch who lived under my bed.

There was much more to it than a barely eight-year-old could understand, yet I was aware of the perilous spot our country was in because my parents discussed national and world issues at the dinner table, purposely within earshot of us kids. They never chatted in hushed tones in our presence. I believe they did the right thing but I was frightened. For me, the two most unnerving aspects of the crisis were:

1.  Everybody and their neighbors (and their aunts-uncles-cousins) were stocking up at the grocery stores, preparing for war. Families were mobbing Hughes Market where we shopped, hurrying out with multiple, heaping tottering grocery carts, cramming the goods in their station wagons only to go home and hunker down to wait for the bombs to fall. My family? My folks did their normal amount of shopping. It concerned me that we were the only ones who weren't stocking up. My folks assured me that President Kennedy would not lead us into war; we needed to trust him and not panic. I was panicking.If war broke out and we initially survived, we would die anyway from slow starvation.  Would it have killed them to have a few extra cans of pork n beans on hand?

2.  Balboa Blvd. School held frequent bomb drills, and emergency warnings regularly appeared on TV, saying "This is just a test. If this were a real emergency you would be instructed to go to your nearest air raid shelter . . ." etc. I didn't know where an air raid shelter was--there certainly weren't any around our neighborhood. At school we were told (and a note was sent home to our parents) that in case war was declared all students would be sent home immediately. My friend Denise Brader assured my Mom that when that happened she would take me home with her because she lived near the school. Mom gave me a stern look and stated that I was to come straight home in a hurry. Do not pass go and do not collect $200, basically. And don't stop to play either. And oh, the bomb drills. When the air-raid sirens blared we were to drop to our hands and knees under our desks, and cover our heads with our arms. 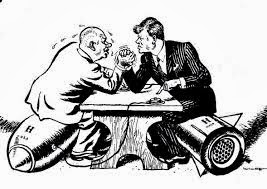 Well, my folks turned out to be right on. The USSR backed down, we avoided war, and life soon returned to normal. My childhood will forever be defined by as "before" the Cuban Missile Crisis, and the "after." The before was an pleasant innocent childhood. The after ended up being the assassination of President Kennedy, the fearful possibility of nuclear war, race riots in Watts and the words seige--bombing--offensive applied to places like Hue, Da Nang, Khe-Sanh and Hanoi during the Vietnam War, but those are stories for another day.