Our Version of Poverty

We were our own brand of poor in the early years of our marriage (1974).  Never "no food on the table" poor. I don't mean to insult people who are seriously suffering from want.   But neither were we the obnoxious hand-wringing "oh dear, we can afford to dine out only twice this week" brand of "poor."   Maybe twice a year for us then.  At McDonalds.  With a shared small fries and ice water. 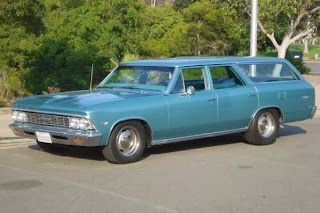 our car was the same model and color, but way less posh than this one

We rarely drove it because gas was a whopping 40 to 50 cents a gallon.  So, we walked or cycled to school and other places.  Weekly grocery shopping exercised our car.   We shopped at Storehouse Market on Second West.  It was the original warehouse-style grocery store, extremely basic.  Concrete floors, dark gloomy clammy atmosphere, canned and packaged goods still in their cases, and produce that had mostly lived out its useful life.  Oranges were 5 cents a pound, a third of what they were elsewhere, but I had to pick through a mountain of them to get 20 good ones.  Bananas were 9 cents a pound, always, as advertised on a permanent sign outside the store.   Decades after graduation we happened to pass by Storehouse Market on a visit to Provo.  Bananas were still 9 cents a pound.  It was the same old sun-faded sign, too. 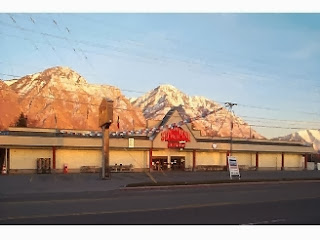 the remodeled Storehouse Market--photo probably taken in the 90s

We found other unique ways to save pennies here and there.  Our telephone was a party-line, but at least we had a phone.  A party-line was shared between several other people and was half the cost of a private phone line.  Occasionally when we picked up the phone to make a call, a stranger who shared our line would be using it.  We could listen into their conversation if we wanted to (but we didn't want to).  And how quaint is this?  To save a ten-cent stamp when bill-paying, Craig rode his bike 3 miles downtown to the utility company to pay in person.

In those college days we usually had a nickel left at the end of the month.  Seriously folks, we came in barely under our $195 per month budget.  Rent was @ $90-something, food @ $60-70 per month, we had some small insurance costs, utilities, rare fill-ups for the car, super rare clothing and shoe purchases, and college textbooks and supplies.  And what did we do with that nickel at the end of the month?   We bought one soft ice cream cone at the Wilk.  To share between us.

In 1976 we were heading home to Southern Californa for a visit, and there was the problem of paying for gas.  We advertised on the ride-board and 6 students responded to share in gas costs.  One of those was leaving college for good with her mountain of stuff to take home.  We drove the 650 miles with 3 people in the front seat, 3 in back, and 2 stretched out in the way-back, recumbent on top of that gal's stuff.   Seatbelts?  The driver, yes.  AC?  "4-and-80", which means: open all 4 windows and drive 80 miles per hour.  Without those 6 students to pay for the gas we would have had to take out a loan to get home.

My most pathetic memory of our "poverty" involved my senior thesis.  I splurged on a package of quality paper (50 sheets), borrowed a typewriter, and went to work transforming my rough draft.  Near the end it became apparent I was going to run out of paper, maybe by 2 or 3 sheets.  To spend a couple of dollars to buy another pack just for a few sheets was out of the question.  I dug around in my old notebooks and found 3 sheets of cheap yellowed typing paper and used those.  It didn't make a difference in my grade of course, but my pride was dinged, and I wondered if the prof thought I was a dope for marring the beauty of my thesis. 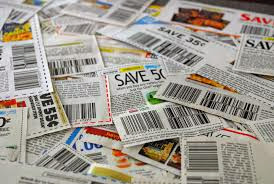 For decades I saved $$ on groceries with coupons.  Couponing has experienced a resurgence, and it seems that the younger generation thinks they invented the technique, but no, it's what got us through the lean years back in the day.  Everything that we could buy on clearance, or at least on sale, we did.  I sewed my kids' clothes using remnants that were marked to half off. 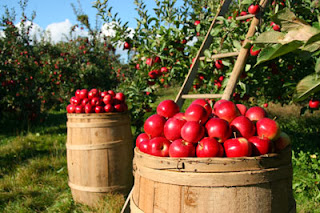 My friends and I became experts at gleaning produce from local farms.  If we went for cherries or apples or pears and they were 5 cents a pound cheaper if we picked our own, that's what we did.  One day Janet and I went to a commercial orchard looking for a deal on peaches.  They had culls not good enough to send to the cannery, but for $3 per bushel (half price), we picked through them and came home with more than enough for both our families.

We still live cheap, even though it's no longer a necessity.  It's always a satisfaction to me to buy something marked down to half of the clearance price, or to buy the slightly bruised bargain bananas.  Some things never change.