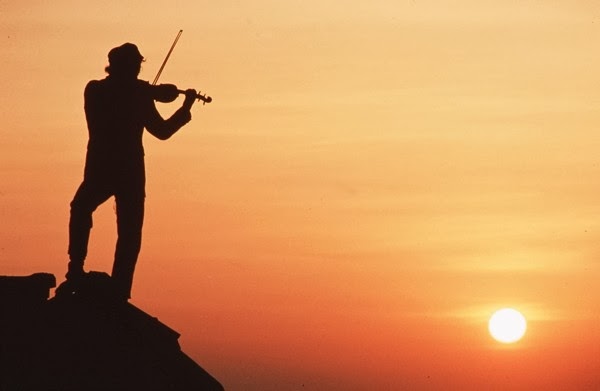 That sounds so quaint--"an arranged marriage."  It  conjures up images of lace-bedecked veiled brides meeting their husbands for the first time at the altar. What a priceless experience to have been a fly on the wall on those occasions. Would the bride's expression on seeing her husband for the first time have been:

In my family "an arranged marriage" was a reality only two generations back from me. My own Grandmother, my Baba, was given away by her brother to my Grandpa, an immigrant Pennsylvania coal miner. Here are the earliest photos we have of them, from about 1918. They were married in 1912 but lacked money for a wedding photo.

Baba was not put off by her prospective husband. She had seen him around her home village in Eastern Europe. He was  handsome, five years older, and earning about what could be expected for a young 20s little-educated Slavic immigrant. Baba did not want to marry. She was barely 16; in the old country she wouldn't have married until age 19 or 20. She had been in the US for only six months. She worked a menial job and loved the power and independence. But her brother Michael was responsible for her, and had his own family to support. When Grandpa approached Michael to ask if he could marry Michael's sister, Michael gave consent and made arrangements, and there was not a thing in the world Baba could do about it. In Michael's defense, he was simply carrying on an old-country tradition. He knew of John from home and that he was a decent fellow.

The wedding occurred July 20, 1912, at the Byzantine Catholic Church in Clairton Pennsylvania. Rocky bleak times plagued this family: frequent moves as mines closed and workers were laid off, poverty, strikes, drinking, the death of a child, my Grandpa's peevish ways, overloaded lives when they ran a farm when Grandpa still worked a full shift at the mine, black lung, and the worst, Grandpa's crippling accident at Colonial #3 mine at Rowes Run Pennsylvania. That was the last day he ever worked as a miner. He was hospitalized for nearly a year, and paralyzed for good.

For the next 15 years Baba took care of her almost home-bound, almost helpless husband. The strenuous daily work took its toll, and it never got easier. Grandpa's health further declined when cancer took over his life. He died in 1966, 54 years into their arranged marriage.

Almost 30 years later I sat in Baba's kitchen, my cassette recorder running, asking questions about her childhood in the old country, and her experiences as a immigrant with a large family during the Depression and two world wars. In a very matter-of-fact tone she related the hardships of her life, and then focused on the intense and tedious care of my Grandpa in the years of his disability leading to his death.