The Fine Art of License Plates 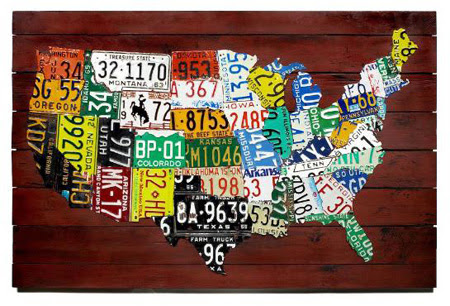 Last week I wrote about picturesque state flags.  My husband suggested a blog about license plates.

Plates have come a long way since this typical 1960s example:

Well, EXCEPT for Virginia.  Here's their current plate:

Plates are free billboards to advertise the magical bounty of a state. I'm pretty sure Virginia has history and beauty that should be on their plate. Even if they don't, they could at the very least follow Montana's example of putting their state outline for all to see (dull as it is):

Or they could do as New York and a few others do: add a teeny tiny outline of their state. Well, maybe not. That messy inkblot would never inspire a person to say, "Hey I absolutely must visit New York!"

Now for the best plates.  Hard choices . . . out of 50 state plates I would say over half of them are scenic tableaus that attractively encourage us to visit their state.

a little busy with the 50th seal, but towering snow-clad mountains and long-light days says: Alaska!

two colors, one graphic--Rhode Island's perky plate lets us know it is all about the sea

as with their state flag, New Mexico has gone simple . . . and effective

New Hampshire's famous symbol, The Old Man of the Mountain, appears on its state quarter, license plate, route signs, etc. The mountain collapsed suddenly in 2003, devastating the folks of NH. It would be like Utah's arches crashing down, or Maine's forests burning up.

And, Oregon, My Oregon: 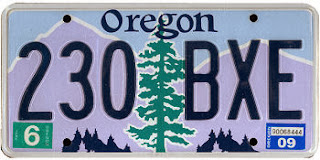 Not a bad plate, now. When it first came out 20-some years ago you could have heard the outcry from the bottom of Hell's Canyon.* The tree was a languid lime green, the mountains were a pale lavender-gray, and the sky was a smoggy brown.  Brown sky??  Yeah. The state didn't react fast enough to the criticism, and people took the law--and colored sharpies--into their own hands to brighten and true up the colors. The state fixed the palette. We're sort of happy with it now.