When Smokers Ruled the Earth 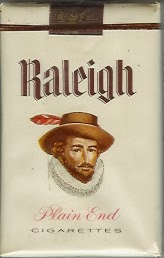 How refreshing it is to go into a store or theatre or place of business and not have to hold your breath for the duration of the visit! In restaurants you don't even have to choose anymore, between smoking and non-smoking, fumer or non-fumer. It's a brave new world out there, and I for one am grateful beyond belief. I paid my dues in discomfort, illness, and suffering over decades of breathing second-hand smoke.

Both my parents smoked, and both paid a high price for the privilege, eventually. Mom picked up smoking when she was working in New York City in the late 40s. Her Mom smoked, and her Dad smoked a pipe. If you watch a movie from that era, you'll notice that pretty much everyone inhaled. Dad never smoked until his WW2 Navy years, when cigarettes were distributed to the enlisted for free. On board ship all but a few partook.

I absolutely despised smoking, but was stuck with it in my own house. It was like the unfortunate folks victimized by a coke plant or steel mill going up right next door--it wasn't going away, but since it was home, it became an integral unpleasant part of life. I despised the smell, the smoke, the filthy ashtrays, and the other connected dangers. It was common for the still-burning butts to be thrown on the ground and more than once I stepped on a hot one in my bare feet. When I went away to college at BYU, with not a smoker for miles, I couldn't figure out why the smell of cigarettes permeated my student apartment. Then I realized it was my clothes. Holy mortification!!  Being deeply immersed in cigarette smoke for my whole life, I never knew that my clothes reeked all the time.

Zero rules against smoking existed, so children and other non-smokers were subjected to second-hand smoke everywhere. You ate in a restaurant, you breathed cigarette smoke. You went grocery shopping, you breathed smoke. You wanted to enjoy the beach or movie theatre, you breathed in smoke. And you flew on an airplane, you breathed smoke. Yeah. I don't know when it happened, but smoking sections were created in closed spaces such as theatres and airplanes. Can you guess how effective that was? Smokers might be confined to the last 5 rows, but the air was shared by all.

My folks smoked enough that the cigarette coupons they collected from the back of each package could be redeemed for some good stuff. There was a "cigarette coupon redemption center" somewhere nearby--I vaguely remember going there. My folks gave me a guitar for my birthday and guess how they paid for it?  In cigarette coupons of course. Mom told me never to reveal that fact, but I just did.

About the time I got into high school I grew bolder dealing with smoking. At high school football games my friends and I vocally denounced the smokers in the stands who were polluting the air. They called us rude teenagers. My brother and I began calling cigarettes "cancer sticks" to my folks' faces. They didn't react. Guess they thought it was a passing phase. In my first year of college my Mom hired me to clean house for her weekly. I told her I would make the house spic and span, but I wasn't touching ashtrays, and if I found packs of cigarettes around they were going in the garbage. So, she took care of the ashtrays and my folks began hiding their cigs.

The second-hand smoke damaged my health. I was prone to exercise-induced asthma already, and breathing in three packs of cigs a day didn't help. As a child I couldn't run around the block without gasping for breath. But for my folks it was life and death. On New Years' Eve 1980 my Dad had a heart attack. We rushed him to the hospital emergency room. The first thing they asked him was, "George, do you smoke?" "I used to," he said. "When did you quit,?" the doc asked. Dad's reply: "About 30 minutes ago." And he never smoked again and lived 25 more years. Mom wasn't so lucky. I remember when Daniel was about five years old he said to his Grandma, "Grandma, you shouldn't smoke." She told him he was absolutely right. But she kept on, and died of a heart attack at age 67.

So, why does anyone smoke? They get polluted air, filth, danger of fire, life-threatening illnesses. It's a mystery to me why that appeals to anyone. And now, my favorite Far Side cartoon ever: 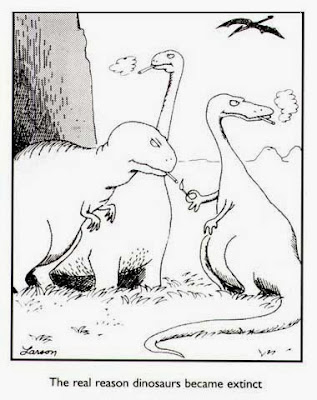