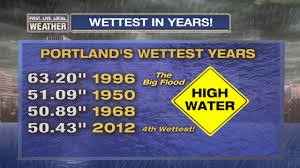 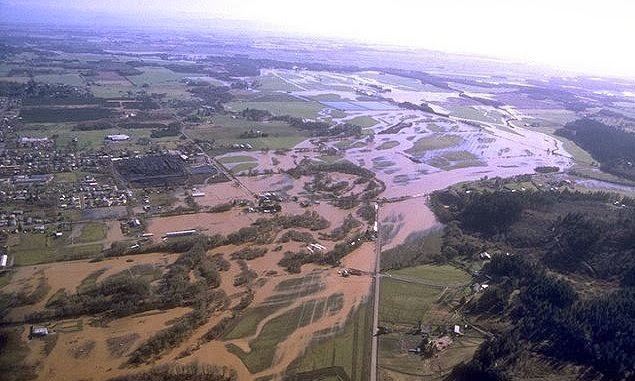 The year 1995 closed with a gale when on December 13, our area was hit with a hurricane of sorts. Schools closed, trees crashed, cars were crushed, and roofs were launched, never to be seen again. We couldn't know there was more drama just around the corner in the form of a 100-year flood.

Almost twice as much rain as normal fell that winter, and in January 1996 the mountain snowpack was above average. In late January low lying areas such as ours (we're at 242 feet) were hit with a decent snowfall--meaning about four inches over our usual dusting. The snow never had a chance to melt. We were plunged into a deep freeze when temps sunk into the teens, the wind kicked up to gale force, and we heartily wished we had wintered in Florida. It was so bitter outside that I just had to get out of Dodge . . . actually, I left town for a family wedding that was to be held February 3 in balmy Southern California.

That very day, February 3, one of Portland's notorious ice storms paralyzed the city for 3 days. You haven't seen chaos until you've been here during an ice storm. The fear (and reality) is that you will be stuck wherever  you are when the ice starts falling, so you've got to drop what you're doing to get where really want to be for the next few days. Because once you get there, you're going to be trapped for the duration. So, everyone ditches work and errands to rush to their desired destination. Only, while they're en route, the roads become un-driveable because they're, um, coated with sheets of ice.   Portlanders take leave of their senses at times like this. They abandon their cars on the freeways, highways, and byways. And somehow, I guess they skate home on the ice. And of course they can't get back to their cars until the ice melts at which time no one can navigate the roads because of all the abandoned cars parked topsy turvy. But I digress . . .

So we have the greater Portland area stuck in a deep freeze until the morning of February 6, when a "pineapple express" air mass migrated into the area bringing a deluge and temperatures in the 60s. The lows were well above freezing in the mountains forcing instant snow melt. Over the next few days 7" of rain poured in my area, 11" on Mt. Hood, and 20" on Saddle Mountain near the coast. The rain joined with the speedy snowmelt swelled creeks and rivers to immediate, raging flood stage.

Suddenly Portland was in danger of water spilling over the sea-wall into downtown. The river rose 14 feet in a few days (the Willamette River crested at 30 feet on Feb. 9) and the  mayor called for volunteers to build a flood wall to keep the water out of the city. It was successful, only because the water topped the seawall by only a few inches. Houseboats were ripped from their moorings and off they raced down the Willamette towards the Columbia. Furniture, full-grown trees, and miscellaneous debris floated through the city on its way to the sea. Landslides blocked roads. 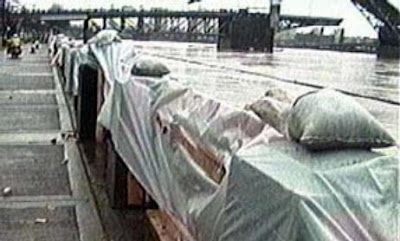 I knew nothing of the flooding until I flew in from California early on the morning of February 6, and my husband didn't show up to bring me home from PDX (cheers to the pre-light rail days). I called him repeatedly from the pay-phone (cheers to our pre-cell phone days) but he was never home.  I finally got smart and turned on my walkman, only to find PDX was in the throes of a major flood. After a couple of hours Craig was finally home. He had tried every route possible to get to the airport but all roads were closed by slides or flood damage. Buses were running from the airport on a few routes, so my best choice was to take one downtown and figure out what to do from there. Once downtown I changed to a bus heading for Beaverton, hoping there would be one open road, and there was, but only going west. Craig picked me up at the Beaverton bus depot a good 4 hours after my plane landed.

The focus was on downtown PDX, until one reporter got smart enough to investigate outlying areas. Poor Vernonia in the Coast Range suffered a lot. There was everything from furniture to firewood stuck high in the tree branches, attesting to how high the water had flowed. Schools were destroyed, then rebuilt.*  Even worse, Tillamook was ruined and hundreds of dairy cattle drowned. Unaffected farmers in the dairy co-op each donated a cow to those who were wiped out, to give them a fresh start. 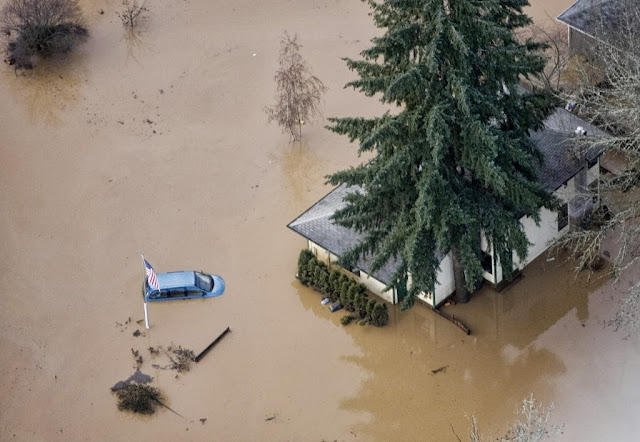 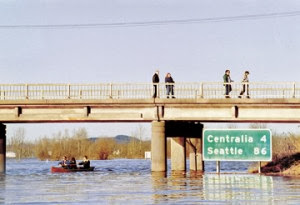 a canoe on Interstate-5 in SW Washington

NW Oregon and SW Washington had been caught in the throes of a perfect storm of heavy snowpack, an ice storm, then a deluge of tropical rain. Chances of a repeat in my lifetime are remote. "Old-timers" still bring up the flood of '96 once in a while. A "newbie" was recently asked if she worried that the creek 8' below her house would flood her place. Of course she wasn't--the creek is waaay down the hill. But she hadn't witnessed the great flood of '96 . . . and how could she ever imagine the terrible possibilities?


*And in 2007 Vernonia had another 100 year flood that destroyed the rebuilt buildings. Their schools have now been replaced on high ground.